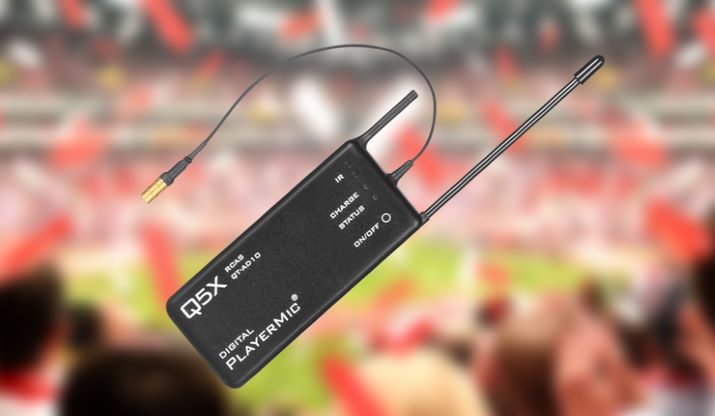 1.FC Cologne’s programme format, 24/7 FC, is taking the viewer onto the pitch with PlayerMic systems from Q5X

German Bundesliga football club FC Cologne has ramped up its audio coverage with the addition of player mics that will pick up every word said on the pitch.

The club is continuing to develop its documentary programme format, 24/7 FC, which is produced and created by Cologne-based production company, Flutlicht-Fil.

24/7 FC will now take the viewer onto the pitch with PlayerMic systems from Q5X. Q5X microphones and transmitters are compact, lightweight and are worn directly under the players’ jerseys. They have no negative effects on mobility or athletics, and can pick up every player utterance, bringing fans even closer to the action.

The audio transmitters are compatible with from Shure, Sennheiser and Wisycom products. To gain the highest usability and resistance the audio transmitters are housed in a flexible, rubber-coated and water-repellent enclosure, that can be placed in pockets integrated into jerseys or glued to pads to fit directly on the player’s body. The devices work up to eight hours on battery power.

Project implementation was accompanied by Broadcast Solutions Produkte und Service, a subsidiary of leading European system integrator Broadcast Solutions, which is responsible for the distribution of Q5X products in the Dach region.

Currently, eight episodes of 24/7 FC are scheduled for production. They will air on the club’s 247.fc.de channel and will be broadcast afterwards on German Pay-TV channel, Sky.

The microphones and audio transmitters are being used during training and test matches.

FC Cologne is always keen to develop its club TV formats further, and with this technological add-on, fans will have a direct and candid insight into the lives of the stars on the pitch.