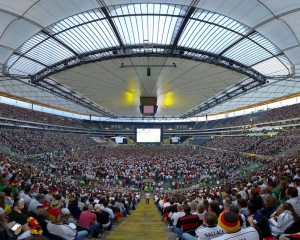 At various German soccer stadiums this year, Bundesliga fans are able to watch what is happening on the playing field in a startling level of detail. The German company Grundig which is the official technology partner of the German Bundesliga, and its merchandising partner, Sportfive, have provided the soccer stadia with gigantic cutting-edge video screens consisting of many independent LED perimeters.

For the biggest public viewing event in the Commerbank-Arena in Frankfurt, Grundig installed a 1,200 inches LED-perimeter-system (26.88 by 15.36 metres), which provides a panoramic view for up to 50,000 visitors.

The module concept makes it possible for LED perimeters with brilliant image quality to be chosen for any kind of requirements, such as those provided by huge events. “We are pioneers when it comes to LED solutions,” emphasises Murat Şahin, CEO von Grundig Intermedia. “The challenge to offer perfect image quality at huge events is an incentive for us to put even more efforts in development and manufacturing.”

At the home matches of various Bundesliga clubs, the video perimeters with a resolution of more than 50 percent more pixel per square metre already surpass by far the Bundesliga standard. Installed in six stadia, the LED perimeters are equipped with an improved regeneration rate. They are six centimetres higher than the previous systems and provide stable, excellent TV pictures for close-ups and slow-motion shots. With only 10mm of distance between the Surface Mount Device (SMD) and the LED diodes, a brightness of 6,000 NITs and IP65 protection against rain, heat, sand and dust, the perimeters offer the highest image quality for all kind weather conditions and direct sunlight irradiation.

In the 2013-2014 season the perimeters were used successfully at Hertha BSC, Bayer 04 Leverkusen, Eintracht Frankfurt, Hannover 96, VfL Bochum and the 1st FC Nuremberg. Thanks to its modularity the system is built up within a few hours and is fully operational.