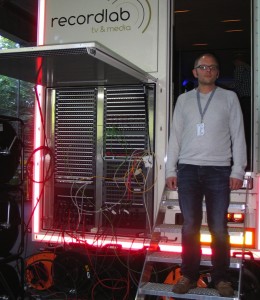 Consolidation in the OB van business continues to progress with news that German companies RecordLab TV & Media and MPP Mediatec Broadcast are going to merge. Both OB van providers were acquired by the NEP Group Inc earlier this year, and starting on January 1, 2016, the two firms are planning to combine their core competencies. For this reason, all their activities will be concentrated in Munich.

Markus Maschke, CEO of RecordLab, will join the management team of MPP Mediatec as sales director. All the other employees of Cologne-based company RecordLab got the offer for continued employment in Munich. “Thanks to the pooling we can consistently extend our service offer in order to offer a much better service to our customers,” underlines MPP managing director Christer Pålsson.

With the powerful OB van of RecordLab, HD6, the pool of vehicles will consist of seven OB vans and two mobile editing units. RecordLab took an important step forwards in live production when it equipped its 16-camera vehicle with Lawo’s V __ link4 system in spring 2014.

“Compared with conventional point-to-point connections, the interlinking via IP offers big advantages for productions because we don’t have to operate every remote station and every box with a separate cable from the OB van anymore,” explains Maschke. The deployment of IP-based live production also brings down the costs in terms of the transmission of big sports events because it is no longer necessary to pull cables over several miles. Instead of eight cable pullers at the back of the OB van, the work can be completed by just one employee with a cable drum.

An essential advantage of the IP-supported technology is that the images don’t require any more post-production in the OB van because the V_link4 system brings the unsynchronised signal via Framestore into the OB van and corrects the colours at source. Therefore, the picture is already processed for everybody who receives it from the broadcast cloud.

While RecordLab TV & Media brings smart technology and know-how to this marriage, MPP Mediatec Broadcast has a team with more than two-dozen professionals which includes the technical department featuring video and sound engineers, technicians and other specialists. Vehicle-wise, the portfolio of the Mediatec Broadcast Group consists of 25 HD OB vans all over Europe. MPP managing director Christer Pålsson points out that the cooperation with NEP Worldwide Network gives them access to the biggest OB van fleet wordwide. This way, it becomes possible to provide a cost-efficient production service not only in Germany, but also elsewhere in Europe and beyond.

Meanwhile, US-based NEP’s Worldwide Network is a global player with a fleet of 120 OB vans as well as more than 50 broadcast studios and control rooms all over the world. The MPP Mediatec Broadcast group in Germany and Scandinavia was acquired by NEP in March 2015. A few weeks later, the acqusition of RecordLab followed. According to Kevin Rabbitt, CEO NEP Group, NEP continues to extend its presence in Europe, but also specifically in Germany, which is considered to be a very important market. Furthermore, the broadcast corporation also acquired Consolidated Media Industries (CMI), the Netherlands-based media group which includes the DutchView and Infostrada Creative Technology brands.

In another notable development, DutchView Infostrada recently launched its Cloud Production system, a comprehensive IP-based video production platform that centralises resources so that they can be shared more efficiently and used sustainably across productions. The primary advantage of this infrastructure is that DutchView Infostrada doesn’t need to provide many productions with a huge OB van anymore. Instead of this, Lawo’s stage boxes are in charge of the local video processing as well as the interfacing of the video and audio signals to the IP network which connects the studio and the site. Instead of investing in remote production or video over IP, the philosophy is to create a cloud platform which makes resources available on demand. This production process requires fewer crew members on site, which clearly means less expenditure on travel and accomodation.