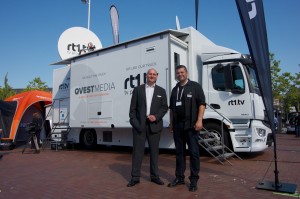 Uplink link up: Putz and Jaworski outside rt1.tv’s new OB truck at IBC

German production company and service provider rt1.tv (with bases in Augsburg, Berlin and Cologne) has taken delivery of a new multifunctional OB truck HD 7 from Qvest Media. The truck will be used on Champions League games as well as talk shows, debates, concerts and other sports, such as basketball. It can handle up to eight cameras, including super slo-mo, and has EVS and highlight compilation and Dolby surround sound. It also has an on-board SNG antenna.

“We wanted a compact truck that has a lot of video and audio capabilities. We have a compact OB van with an uplink that makes it really unique,” said Michael Jaworski, team management, outside broadcasting and SNG, rt1.tv.

“We don’t need an extra uplink truck and there are many productions where there isn’t so much space for bigger trucks. We needed a lot of big facilities in a small space,” added Jaworski.

The company often works at sports events where it is producing the national feed, “and that means when we are going to a Champions League broadcast there are big trucks from the host broadcasters and we mix everything and plug in this truck.” It also has its own Fischer Panda 25KVA diesel generator, plus UPS, “so we can be completely independent.”

It is RT1.TV’s biggest truck and was designed by Cologne-based Wellen+Nöthen (which changed its name on October 1 to Qvest Media, which had previously been its brand for its operations outside Europe). “They really did it in a new way, with wood and contemporary design,” he said.

“We want not just to have an OB van where everything is grey, but to have a nice atmosphere,” added Putz. “It’s a very flexible unit.” It cost about €2.5m, and from planning to completion took less than four months. “Outside broadcast is always under time pressure,” said Jaworski. 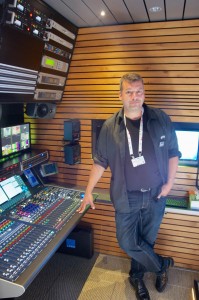 “It is the fourth truck we’ve built with Wellen+Nöthen. The others were SNG trucks: one the same size [as its new truck] but without the expanding sides, and two smaller vans,” he said. Its customers (nearly all of the main German TV stations) prefer using smaller trucks. The smaller four-camera vehicles are mainly being used for news production. We could work very closely together to find the best solution, with very interesting ideas from the systems integrator,” he added. It is currently also having two smaller SNG trucks built, for delivery this year.

HD 7 uses a 2.4m Vislink News Swift antenna, and up to three on-air signals can be uplinked at once, using Ericsson and Tandberg encoders. “Vislink built the antenna especially for this, without any foldable ears, because it wasn’t necessary for the size of truck, and because it will be doing winter sports and we didn’t want to risk ice in the folding mechanism,” said Putz.

It has a separate technical area, a production space (including the EVS area) and the audio room, all separated by large sliding glass doors. “It is important for us to have a very open atmosphere with lots of windows,” explained Jaworski.

“With our other trucks we have had good experience with Grass Valley and Lawo — which works very well with the Riedel MediorNet stage box system. Everything fits really well together,” said Jaworski. The coach building on the Mercedes base was carried out by Akkermans in the Netherlands.