It’s arguably the most important sporting event in Italy and one of the largest in the world. SVG Europe is referring, of course, to the epic stage bicycle race, the Giro d’Italia, which takes place every year during May and June. 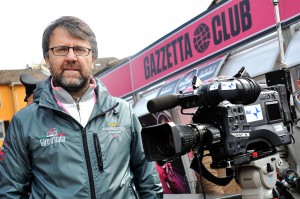 In advance of the 2013 event, Italian state broadcaster RAI and RCS Sport signed an agreement granting rights of deployment, transmission and utilisation of cycling races on television by RCS Sport.

Matteo Pastore, head of media rights and relations for RCS Sport, La Gazzetta Dello Sport, comments: ”This is a historic turning point in defining the role of RAI as host broadcaster, head of the television signal, produced with HD standards, overseen by an international direction and [based] on two different models of production. The duration of the agreement is four years, from 2013, and [is informed by the development of a] technical production manual which defines and specifies the role of RAI as host broadcaster responsible for the production of audio-visual international and domestic TV signals of the cycling races, with HD production and international technical control.”

Enrico Motta is the project manager of this production and other major events for RAI division RAI Produzione Grandi Eventi. “It was a huge breakthrough accomplished by making a responsible [one] step at a time,” he says. “We studied the possible; we ae doing the impossible but with some caution, with measured steps.”

The big difference from previous editions this year is that not only does RAI produce everything in HD, it also FTA broadcasts in HD on channel 501 of the digital terrestrial service, DTTV, plus the usual satellite platform in Tvsat.

The entire production team is involved in direct broadcasts, as well as in contributions to news bulletins, several evening shows for RAI Sport 1, RAI Sport 2 and RAI 3 (the network dedicated to cycling), and journalistic contributions to other channels of RAI. The production infrastructure is active for 16 hours a day and generates a remarkable quantity of content that adds up to about eight hours of programming per day.

At the heart of the team is RAI head of major events and deputy director of TV production, Dr. Maurizio Ciarnò, who gives the “OK to proceed”. He works in conjunction with Motta and team, who since 1998 have established and refined the system that was lately upgraded to HD. Indeed, the greatest single piece of news regarding the event this year could well be that everything is being broadcast in HD on CH 501 o DTT.

“The system works and is functional and working,” says Motta. “Basically, the work day is divided into three parts beginning with the dawn, around six in the morning, where you start with the installation of the systems, with the occupation of the space needed to pull back and complete all structural wiring. Then, once you create the wiring ridges the team that takes care of the shooting takes over, connecting all the links to the OB van on the spot for filming; the technical and production units, everything is tested and put into operation.”

The TV compound this year is totally interconnected by optical fiber to a central ‘star like’-hub that collects all the signals. It collates the ops of all OB vans, peripheral equipment, commentator locations on the grandstand near the finish line, and the studio where the RAI Sport programme Il Processo Alla Tappa is filmed. Everything arrives at the TV compound via a redundant fiber optic ring in order to avoid problems even in the case of interruption.

The second part of this report will appear on the SVG Europe website on 23 May.