Getting the inside track on Giro D’Italia (stage two finish) 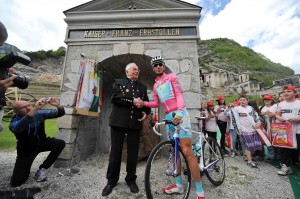 For broadcast production of the Giro D’Italia, two RAI OB vans are deployed: one to take care of the production process for RAI Sport; the other for the international feed viewed in 173 nations. In fact, as per the four-year agreement between rights’ owner RCS Sport and RAI, two different feeds are created and distributed. One is for international purposes whilst the other, for RAI, is for the home territory with personalisation.

Rome Unit 7 and Unit Milan 2 are the two mobile units involved in the Giro D’Italia this year. Twelve and ten metres long, respectively, they can shoot in Full HD and are part of a workflow that involves the positioning of 11 cameras on the ground and four motorbikes for shooting live below the cyclists on the move. In addition, there is a motorbike for ENG shooting and extra contributions to news reports, while two Wescam cameras are installed on a helicopter in line with the standards verified and approved in previous years.

All cameras in motion obviously work in RF, while the others are wired or in RF according to the requirements and depending on the distances that every stage needs to cover.

“Where the cameras are connected via land cable we still prefer the triax cable because we at the RAI technical team [consider] it more robust,” says Enrico Motta, project manager of this production and major events for RAI Produzione Grandi Eventi, who refers to Dr. Maurizio Ciarnò, head of major events at RAI and also deputy director of TV Production.

“That is principally concerned with the events of greater public success, but when the cameras are operating in the mountain’s finishing stages it is imperative to have the right resources that manage the signals that travel several miles away from the position of the cameras themselves to the TV compound. For example, in the finish stage of Montasio, given the altitude of the stage, the OB vans stop in the valley, while the group of cyclists in the mountains [are followed with] a special fiber optic hub [that] collects all the signals and carries them with seven/eight kilometres of optical links to the TV compound, which is then connected in real-time to the finish stage area of the race.”

On this fiber optic link are conveyed several signals: all the cameras, intercoms, data for the timings, metadata, audio and everything else required. For those working in the control room it is as if the cameras were just outside the OB van since all the signals arrive perfectly and without delay.

Motta observes: “The technology has allowed us to reduce a bit the number of professionals involved, at least 10% less than last year [although the number of media personnel involved is always considerable…], but it is difficult to say precisely where we have saved on the staff because the system is to be seen as a whole.

“As a rule, every day we cover three hours of the race live, from 14.30 to 17.30, although sometimes due to the cold and fatigue the race lasts even longer. Giro D’Italia is broadcast on RAI 3, RAI 1 and RAI Sport 1, and all airs for the first time on channel 501 of RAI HD on DTT plus TVSAT platform. [We are] certainly not lacking retransmission streaming on the web, which is very [extensive indeed].

“For those who follow the tour from the RAI website, all the feeds of parallel cameras can be seen – motorbike 1, motorbike 2, helicopter, etc – creating a choice of personal points of view in the house, becoming a sort of director of the race, as already experienced in the last three years.

“This year, the streaming quality on the web is significantly higher and there are certainly applications available for smartphones and tablets for viewing on the move.
“The fact [that we have] built the optical fiber hub has allowed us to [remove] the copper from our equipment – apart from the power cable! As a result, even the wiring now [has less impact] on the beauty of the many areas that the Giro encounters in its various stages.”