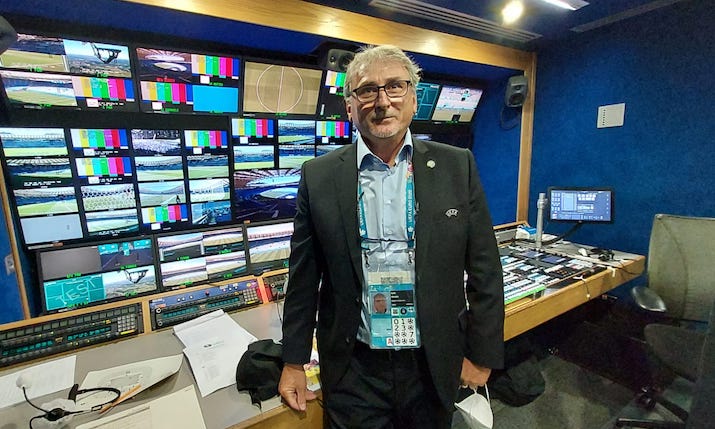 Italian director Giorgio Galli started his broadcasting career at the age of 20 at a local TV station in Reggio Emilia, joining the sports team as a cameraman. He quickly moved into directing, thanks to sports manager Franco Tosi.

In the mid-1990s he began directing Serie A football matches for Tele+, even calling the shots on Bologna vs Lazio, the first-ever pay-TV game in Italy. He also spent time as replay director on the Champions League and at Stream TV which, following the merger with Tele+ at the beginning of the 2000s, became Sky Italy.

When Mediaset took over the rights of the Champions League, it was entrusted to Galli for the entire three-year period, and he was head of the directing team for the 2016 final between Atlético and Real Madrid.

These are just a handful of the prestigious moments in Galli’s 26-year career which have allowed him to witness some of the most important evolutions in terms of technology and direction. Here he shares some of the biggest developments and technological changes.

What I learned along the way

“Over the course of my career,” says Galli, “technology and the setting of television directing have changed significantly, from an analogue signal in SD to a digital signal in HD and then in UHD.

“In general, it is fair to point out that the entire Italian technical team, including camera operators and replay staff, have grown a lot in the last five or six years. This is also thanks to the Lega Serie A which deals directly with them, and it is no coincidence that Italian staff were hired for the UEFA European Championships 2020.

“Among these, I would like to thank in particular two professionals who have worked in symbiosis by my side at thousands of events, Stefano Schiavinato, replays director, and video mixer Silvano Casiraghi.”

“The language of television, in practice, has not undergone substantial changes, although cameras that take wider shots can afford even wider fields because the increased definition allows for much better image quality,” Galli continues.

“Today, even with UHD, the definition is so high that there are no more problems with ‘reading’ the image. In the past, camera operators almost always worked with cameras on the sidelines placed on tripods. But, since the mid-90s most of them have worked on piattine, that is special tripod platforms where the operator is seated and performs panning movements with the help of their legs. The shooting point is lower and more dynamic, resulting in a better view.”

Geographical differences do remain, however. “It is interesting to note that in Italy it is television shooting that adapts to the stadium, while in other countries, such as England, it is often the stadiums that adapt to television. In other words, it is not unusual for sports facilities to be built specifically to facilitate television shooting, for instance with the playing court raised by 70cm compared to the position of the benches, photographers and cameras on the sidelines,” he explains.

“Thus, especially in the goals, a shot is made by optics placed almost level with the ground, producing much more spectacular replays.”

Knowing how to read the game

The shooting technology applied to cameras has changed a lot since the 1990’s, Galli adds: “Today super slow motion cameras can propose footage at 75 frames per second instead of the nominal 25.

“This allows us to propose much more fluid and spectacular replay moments and in some cases with the Ultra Emotion we can work with 300/400/500 frames, according to the lighting available in the stadium, with an impressive resulting sharpness in which it is possible to capture even the droplet of sweat falling from the player’s forehead.

“This creates the indispensable feeling that is established between the host broadcaster TV director and the replay director/operator, since slow motion intakes are very spectacular but steal several seconds. Over the years I have often worked in perfect harmony with Stefano Schiavinato who also directed the replays for UEFA 2020.” 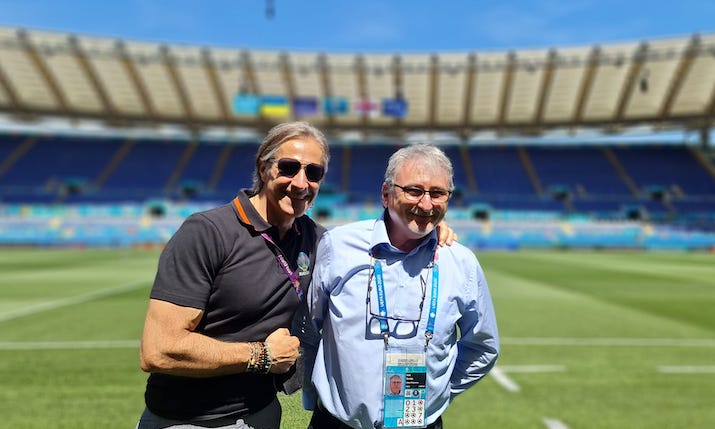 Schiavinato himself adds: “In the management of replays, the equipment of the past recorded linearly on Betacam magnetic tape and had to be disconnected from the continuous recording of the assigned cameras when calling them for a replay. It was imperative to stop them as little as possible and to be very careful not to miss important moments.

“Today, all replay sources are digital and you just assign a clip to what you need in the game to recall it with the replay: it takes just a couple of seconds.

“It is a very different management procedure from an authorial point of view because in TV directing today you know that you always have everything available and you’ll never miss anything. It is nonetheless essential to be very careful not to miss important moments of the live action and to re-propose replays only in particular situations, such as longer breaks, if a player gets hurt, or when the winning team has to take a goal kick, corner kick, or line out.

“In practice, in football, unlike other sports where the breaks are well defined (boxing, basketball, volleyball where the referee restarts the game), the game resumes without the referee’s whistle forcing a very high level of attention.”

“Another big change in football”, continues Galli, “started with the inclusion of goal line technology, which Italy was one of the first nations to adopt. I remember a former Fiorentina player who played for Roma had a header in which the ball was saved on the goal line, maybe inside, maybe outside. From the images – even with the cameras online – it was hard to understand if it was a goal or not. While Udinese was already experimenting with a goal line-style system, the English company HawkEye launched the GLT technology which has since been universally adopted.”

“TV technique has been further improved by positioning cameras with many more points of view. In 1996, when I started with Tele+, shots were made with six cameras, the main one, one for close-ups, two on the sidelines on the strips at twenty meters on the shooting front, two rear goals, plus two fixed internal micro cameras in the goal net, aimed at the intersection of the poles.

“Today in a low-level Serie A standard there are at least 12 to 13 shooting points and in the big matches you get 18 to 20 cameras,” he adds.

“The live action is essentially shot with three cameras which become five if you have two steadycams available (the main, two closeups in the one-on-one, the three low shooters and the two steadies, one on the right and one on the left).

“The other cameras in the field are essentially ‘contour’ and I use them on close-ups, replays, offside and to balance shots.”