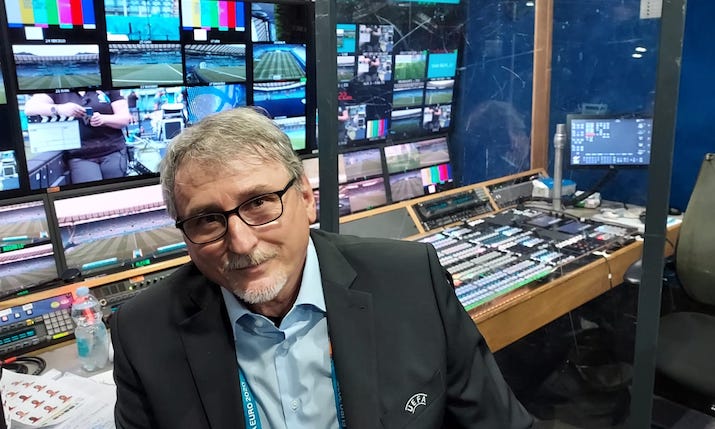 Looking back on some highlights, Galli says: “The 2016 Champions League final marks an important date in which I was requested to directly choose all the dedicated tech staff and create the whole project. This was also the case with the final of the European Under 21 Championships in 2019 and the Super Cup final.

“With Serie A it is usually the television services in charge that provide the staff; on larger events, on the other hand, the director is responsible for choosing the team; camera operators, EVS operators, technicians and sound engineers.

“Many times I had to create the technical team from scratch, choosing everyone, including the operators and the replay director, here often calling on Stefano Schiavinato and video mixer Silvano Casiraghi as well as involving people from all over Italy. I am in total harmony with Silvano Casiraghi who supported me and often read my mind during several final games of the Coppa Italia, in all the biggest Serie A events and during UEFA 2020.”

“The director who chooses all the staff must absorb all the critical issues of each match. The distribution of the signals is always complex, not to mention the audio assignments which are always many.

“Just as the director of a music programme must know music in detail, the director of sports must have a solid foundation in television technique but also master that sport in detail. Some sports depend very much on careful and optimal positioning of the cameras, which, in practice, work in sequence, as in skiing. In other sports it is essential to know very well the outline as well as how to create a story of the game. 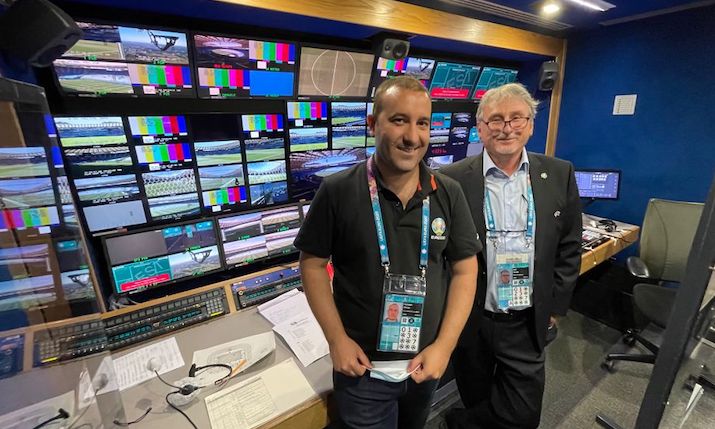 “Especially for the director, but absolutely also for the camera operator and the video mixer, it is important to know the rules of the game and the protagonists very well. Everything that surrounds the team can become interesting alongside the match itself and it is essential to know how the teams play, to know the characteristics of each player, the referee, the coaches, etc.

“For example, if a player usually aims for the man and breaks off at speed, they will allow the director to use a closer shot. With other players, however, it would be impossible and the cut would be too short which would be annoying for the television viewer.

“The change of rules a few years ago which means goal kicks can now be played immediately allows for a smaller proposition of replays and means we have to pay a lot of attention. It is, in fact, a priority to follow the ball and the spectator must see a match as if they were in the stadium.

The improvement in lens quality over the past quarter century is helping Galli to achieve this. “We started with the 50X in long optics used for close-ups to the duplicable 101X of today; from the main grandstand we are able to propose incredible close-up even from a long distance and without compressing the image plans.

“The director must first of all be a sports person, an enthusiast who must know the subject thoroughly; it is right to compose the shots well but the game is king and the imperative is to know how to tell the story of the match.

“I remember a friendly match a few years ago with [Paulo] Dybala who made an instep stop at a height of two meters; he had glued the ball to his foot and brought it down and the replay was not proposed!

“Many replays are built not only around ‘action-cross-shoot-goal’, but with a ball won or lost in the centre of the field, a doubtful foul, a good play, a heel strike. This is the beauty of football that we want to show. We must know it perfectly and often anticipate it to transfer its enthusiasm.”

A new way of working

“COVID-19 has really changed the whole way of setting up TV work in football, requiring staff testing, using ozonisers, following stringent procedures to enter the stadium, continuous sanitising, temperature readings, mask wearing. There are also no more shots from the locker rooms, many areas are off limits and the galleries have been isolated.

“Even the story of the match has been affected because in the cut on the lower cameras – and on the main one – the almost empty stands must be seen as little as possible.”

“As video mixer of a thousand sporting events, I have been following Giorgio Galli for many years and, together with the whole production team, we have created a strong harmony in our work that allows us to satisfy him in his artistic research, often anticipating his desires. We do this for a single purpose: to tell the story of the game as well as possible and with passion.

“Furthermore, as a video mixer on the main control room, together with the service technicians, I have to optimise signal management and switcher programming, to always have everything under control and to be able to respond to requests with maximum speed and the best knowledge of the equipment.

“Just as in the stadium, the central grandstand remains the best place (it is no coincidence that the main cameras are placed there), because you can perceive the overall dynamics of the game from here. The much improved definition and the new UHD and specialty cameras allow more fluid movements and shots from strategic points that allow you to better understand the various game situations, enhance the technical gestures and the best plays, so as to transmit emotion in addition to the sport.

“The passion of the public, which is decisive in a match, is captured by super motion cameras that work at 75fps, which allow us to return a colourful and picturesque cheer in which we see the true passion of all the fans.”