Glitz, glamour, wind and rain: Sky Sports’ camera op Louise Popplewell on being at the centre of the action 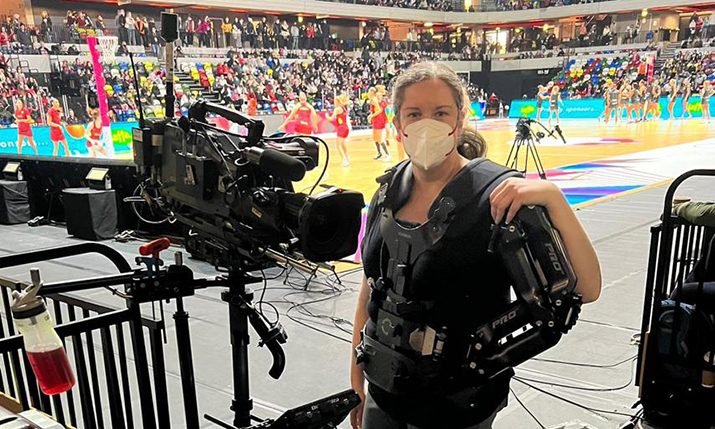 Louise Popplewell, camera operator at Sky Sports, working as a Steadicam operator at a netball match

“I really enjoyed the creative process and being at the centre of the action,” she says. “When I went on to college I did A-Levels in photography, media studies, film studies and English literature. I then went on to university and studied for a BA in Media and Communication and Film Studies.

“When I graduated I hadn’t had much work experience so I decided to do an extra course – a junior researcher course – that guaranteed work experience at the end of it; I had two weeks at a production company that made documentaries. After that, I didn’t look back.”

“It’s not all glitz and glamour though; I’ve done my fair share of standing in the rain for hours filming rugby and football and on wet and windy golf courses. But the variety is fantastic. I wouldn’t change a thing!”

Popplewell comments on how she got into broadcasting: “I originally wanted to work in film as a cinematographer, but once I worked in live TV I knew that was what I wanted to do, and I’ve since found my home at Sky. I’ve been in my current role for just over five years now and although it wasn’t a conscious decision to work in sports broadcasting, it’s worked out to be the perfect place for me.”

On the most challenging aspect of her job at Sky Sports, Popplewell says: “The hardest thing about the role can be the hours; they are long and can be very early starts or very late finishes, but the opportunities I get makes up for that. When you enjoy what you do, you don’t mind getting up at 2.30am, well, not as much!”

She goes on: “I love the variety. I’ve done studio shows, serious shows, entertainment shows, news, sit down interviews with some of the biggest Hollywood stars and even two Olympics, with Tokyo and Beijing. It’s not all glitz and glamour though; I’ve done my fair share of standing in the rain for hours filming rugby and football and on wet and windy golf courses. But the variety is fantastic. I wouldn’t change a thing!”

Read From secretary to senior director: Sky Sports’ Sara Chenery on her meteoric rise through the ranks

Popplewell adds: “I think what draws me to a career in live sport is the variety. I’ve had the opportunity to go to some of the best events and had a front row view of them. It’s often a privilege to get to be where I am, I’ve been at the closing ceremonies of both the Tokyo and Beijing Olympics and the opening ceremony in Beijing, none of which were available for the public to go to, and I got to be there.”

The Olympics was her coolest moment of her career so far, Popplewell continues. “I’d have to say the Tokyo Summer Olympic Games was my favourite moment. It was a month in Tokyo working with NBC launching the Olympics and working all the way through to getting asked to operate at the closing ceremony. It was long days and you had to be very responsive. We were the continuity between sports and if there was breaking news they would throw to us to cover it, so you had to be ready to leap into action sometimes with a minute’s notice. I really enjoyed the spontaneity of it and working in a new way.” 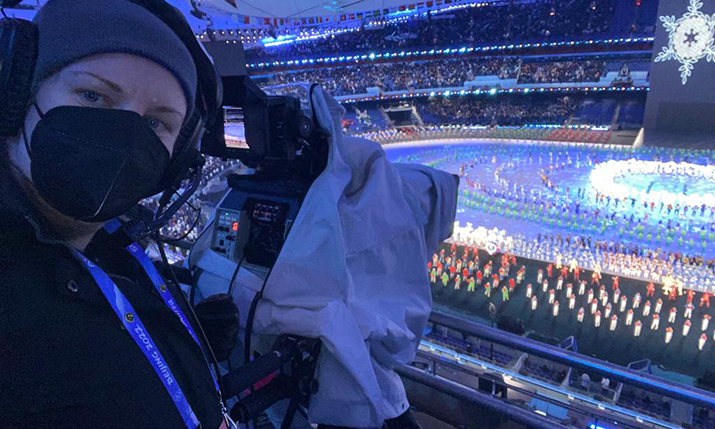 Popplewell’s first job was as a runner in a documentary company called ZigZag. She says: “It was at the end of a production so I was put to work as a logger and as I could touch-type, I stayed there. It was great to have the work experience, but timing meant that I was working during the post production part of the schedule. I still learnt a lot, but I knew it wasn’t what I wanted to do.

“I moved about a couple of production companies working on documentaries and studio shows. I worked on shows like Trisha Goddard and Hell’s Kitchen. While I was working on Hell’s Kitchen I got my first full time contract,” she reminisces. “It was for a small production company of three people. I was to run a small studio for a county council who wanted to make videos of their services. I did that two days a week, and another two days each week I worked with the other two camera operators and covered live sport.

“It was the first time I’d worked for Sky Sports filming inserts for Soccer AM and the down the line at football grounds for Soccer Saturday,” she says. “This is the role where I learned the most. I was shooting and editing my own films for the council and working on live sports for Sky.”

On how that job gave her a head start into sports broadcasting, Popplewell says: “I found that editing my own footage was the best way of becoming a better camera operator. If the shot wasn’t held long enough, or I’d not got enough cut aways, I only had myself to blame and I made sure I got them next time. As I shot, I was editing it in my head, making sure it would always cut together. It built my confidence and made me a much more efficient shooter.”

“Thinking about challenges I’ve faced as a woman working in a historically male dominated area of the industry, I’ve felt like I’ve always had to prove myself”

Popplewell has worked in news, entertainment, documentary, film, shopping TV and sport, and has learned from all that experience. Her second full time role was at QVC, where she learned about working in big studios as opposed to being on location or in very small studios.

She adds: “I’d never used a PED [pedestal camera]; it was a new skill that made my camera work far more creative. I’d also never used robots, so it was a big learning curve. My portable single camera (PSC) role changed as it was shooting promos and products so I could get creative not just on camera but also with lighting. I got to continue with my location work shooting promos for the channel, culminating in a 10 day trip to Cape Town in South Africa. I also developed an interest in working with Steadicam; I went on a course to learn more and was delighted when QVC said they would invest in one.

“During my time at QVC I took some time off to shoot a feature film,” she says. “It was a low budget horror shot over three weeks of night shoots. I got to use the Steadicam every day and improved from thinking about every footstep and hand grip to developing a muscle memory. It was a fantastic opportunity and really helped me work on my skill.” 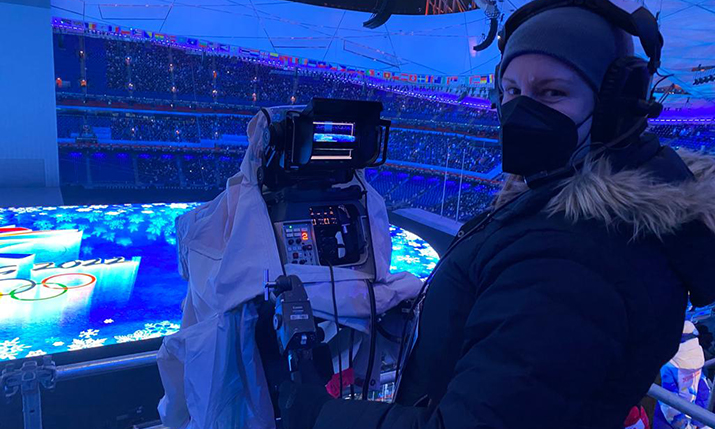 “Advice I would give to women looking to move into a role in broadcasting like my own would be to grasp every opportunity you can and learn as much as you can from it,” says Sky Sports’ camera operator Louise Popplewell

Step up the ladder

Eventually it was time to look for the next step up the ladder, says Popplewell. “I was happy at QVC, but when I had the opportunity to move on, I knew it was the right thing to do. QVC was a fantastic training ground but I knew Sky would offer opportunities I wouldn’t get there; more variety and more travel.”

However, she adds: “It was tough starting again [at Sky]. I went from knowing every aspect of my job to not even knowing where the studio was. Luckily all my skills transferred over really well, especially for robots, handheld and Steadicam, and I was able to build on them.

“I did basic jib work at QVC, but I knew I wanted to concentrate on Steadicam, which Sky has allowed me to do. I’m now a regular OB Steadicam operator, mostly on the netball covering both the Super league and international games including the Netball World Cup.

“In the studio I’ve been regularly operating Steadicam on Soccer AM which is one of Sky’s longest running shows. Having a specialism helps open up opportunities,” she notes. “Fewer people operate Steadicam than any other specialism at Sky, and I also do PSC so it means that I can do a lot of different shows, PSC and OB’s.”

Popplewell adds: “One of the most cutting edge pieces of technology I’ve been involved in in the last year has been working on The Masters and The Ryder Cup on Steadicam using augmented reality (AR). It’s not something I’d ever done before and it’s one of the most specialised things I’ve ever done.

“I had to fly the Steadicam around the golf course up to the green and show people’s shots with animations happening all in AR. It’s one of the most challenging things I’ve ever done and getting asked back to do The Ryder Cup was one of the best feelings.”

As to the challenges of being a woman in sports broadcasting, Popplewell says: “Thinking about challenges I’ve faced as a woman working in a historically male dominated area of the industry, I’ve felt like I’ve always had to prove myself. I’ve often had producers and directors talk to my camera assistant instead of me, or not taken my opinion when I’ve said something isn’t possible and offered an alternative, only when they have gone to a male colleague to get the same answer will they accept it.

“That can be incredibly frustrating, I feel that this has definitely improved over the years, people are more aware. This has made me learn how to show more confidence in myself.”

Popplewell notes: “Advice I would give to women looking to move into a role in broadcasting like my own would be to grasp every opportunity you can and learn as much as you can from it.

“I started in a small company where I was one of three camera operators and I had two mentors there to help me learn. I came up through shopping television which I really recommend; you do six to seven hours of live camera work every day, where you are doing live moves and having to think on your feet. I couldn’t think of a better way to learn. It really builds your confidence to know that you can cope with anything a director will ask of you as you.”

2022 looks to be just as exciting as her last year in sports broadcasting for Popplewell. Hopefully, she says, “with doing more PSC work on Steadicam and getting back out on live sport and lots more Steadicam!”.