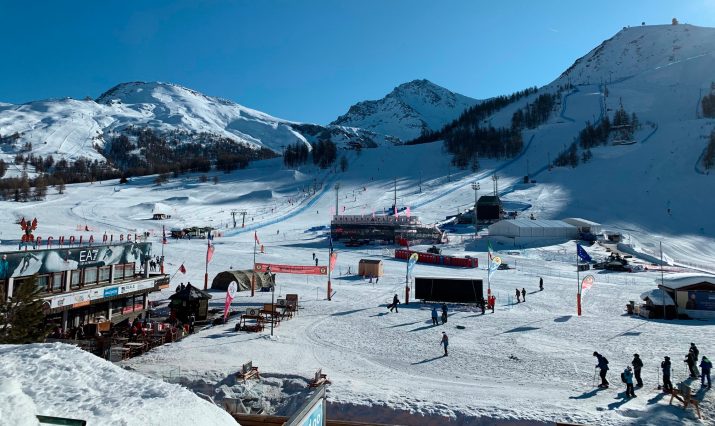 The series returned to Sestriere with the Female Giant Slalom on Saturday 18 January and the special Parallel Women’s Slalom on Sunday 19 January. Italian TV rights holder Infront chose Turin-based Global Production, the Euro Media Group operating team in Italy, as host broadcaster for the television production of these events.

Global’s OB6 mobile vehicle was again deployed, having already been assigned to the production of the Ski World Cup at Val Gardena and Val di Fiemme. It is a 16.5m long vehicle with a Grass Valley Kayak HD300 video mixer and AV matrices by Imagine Communications.

Luca Manfredi, production manager for the event, said: “To make decisions regarding the camera layout, director Sandro De Manicor and assistant director Franco Scotton carried out an inspection on skis in order to find best positioning for the cameras. The cameras are positioned on scaffolding and use long lenses to help make the technical story possible by giving continuity to the racing athletes. Each camera follows a portion of the track so as to facilitate the narration of the commentators who can see the line of the descent.

“The safety aspect is very important if we consider that the athletes in the Giant slalom descent reach speeds of around 80-100 km per hour. The most spectacular points are often also the most dangerous, and the FIS must give approval from the safety point of view.

“All cameras are wired with fibre optics, while two Vislink radio cameras take pictures on the starting line and in the arriving parterre. The area behind the starting gate is populated by athletes and skiers, who create a lively ‘village’ atmosphere.

“The peculiarity of an Alpine ski production is the need to employ specialised shooting staff, not only 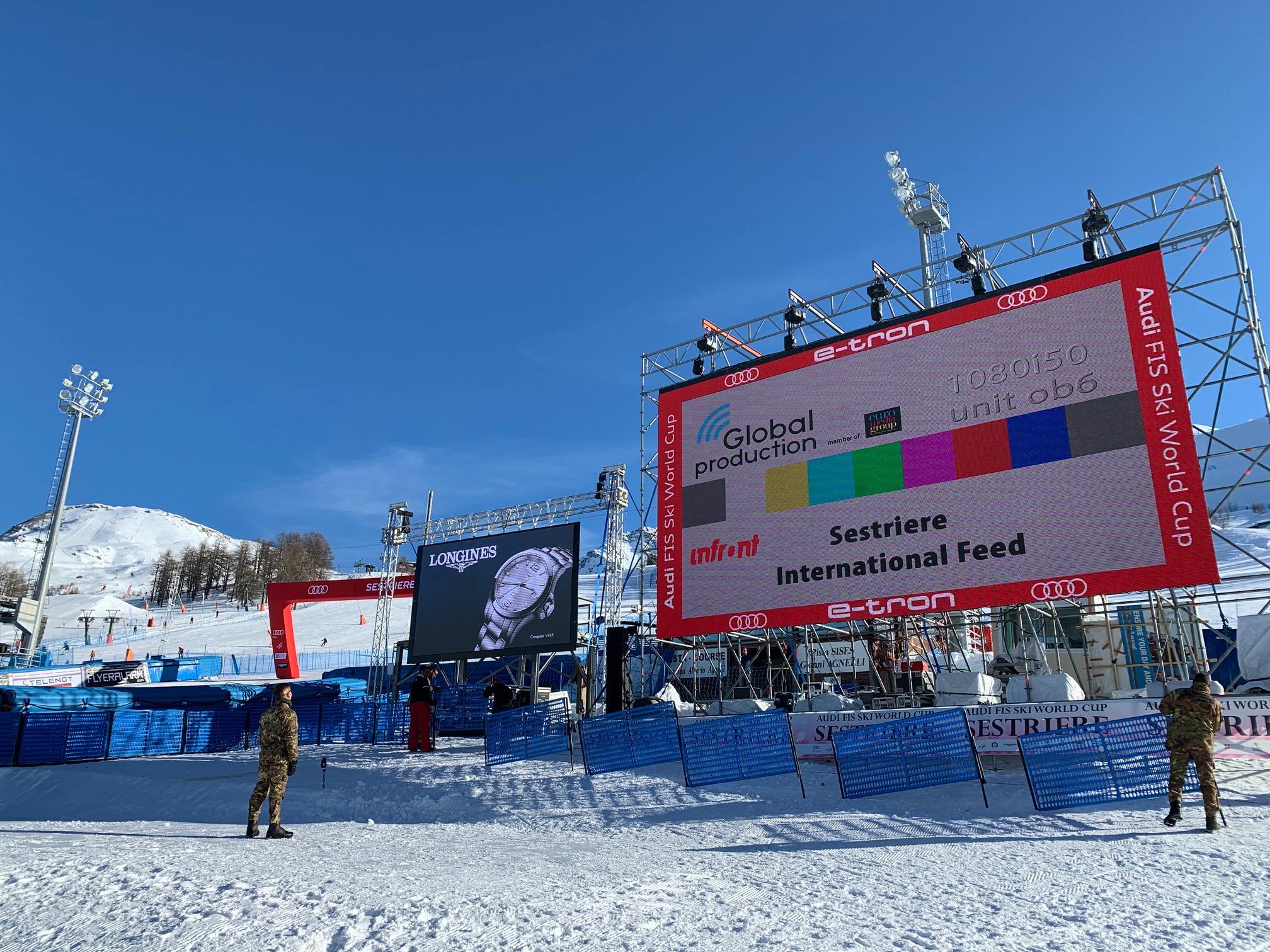 from the technical point of view of the images, but also to be able to move on skis with heavy and expensive materials along the same slopes used by the athletes. These black slopes are typically frozen and are not just covered with simple snow; in fact, two days before the races, these tracks are injected with water at a depth of about 30cm to create a stable ice bed.

“This allows the creation of ‘homogeneous’ conditions on the track that can remain constant for all athletes throughout the duration of the races. The TV production team is therefore made up of staff with great experience in shooting but also deep experience of the mountains – as they are required to work with very low temperatures and tackle the great difficulties in moving around,” said Manfredi.

The setup at Sestriere

An event like Sestriere requires the use of new technologies, making the previous triax approach to wiring obsolete. The cabling system was built from scratch in four days with a dedicated team, to lay the necessary fibres: about six thousand metres of dark fibre and SMPTE fibre cable for cameras and for the signals that reach the TV compound and connect the graphics, commentators and the big screens. 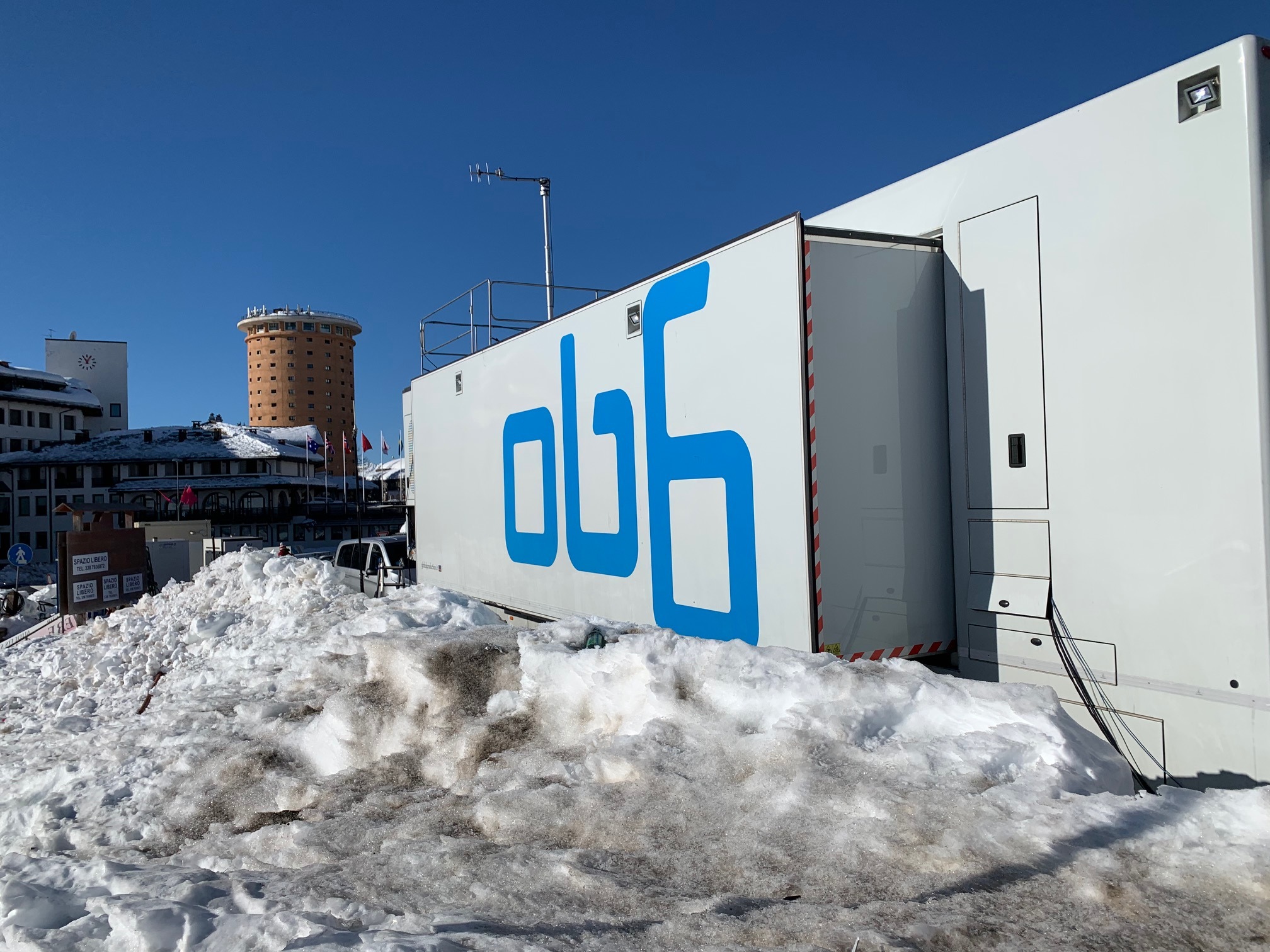 The system consists of four hubs or interconnected fibre stations where all the signals from the cameras arrive and continue to the respective CCUs on the mobile vehicle. A further three days are required for the transport of the cameras to each of the stations along the slope; transport which is carried out in part with snowmobiles and in part by helicopter.

The subsequent setup or fine-tuning of the cameras takes a whole day and then there is the official training of the teams and two days of live races, broadcast on Eurosport and RAI. Sestriere is a complex location involving many optical fibres, 96 dark fibres and a number of Riedel MediorNet devices for the distribution of all audio, video, data and communications signals from TV compound to MCR.

Overall, the event and the two races demand 48 people between resources and the production team for about ten days. The TV compound is about 500 metres away from the parterre and the small building housing the the Swiss Timing graphic team, commentator stations and Master Control Room. Also based here is the team of four race judges, working remotely on a K2 live slow motion Grass Valley Dyno within the mobile vehicle, to review in detail the technical correctness of each athlete in the race.