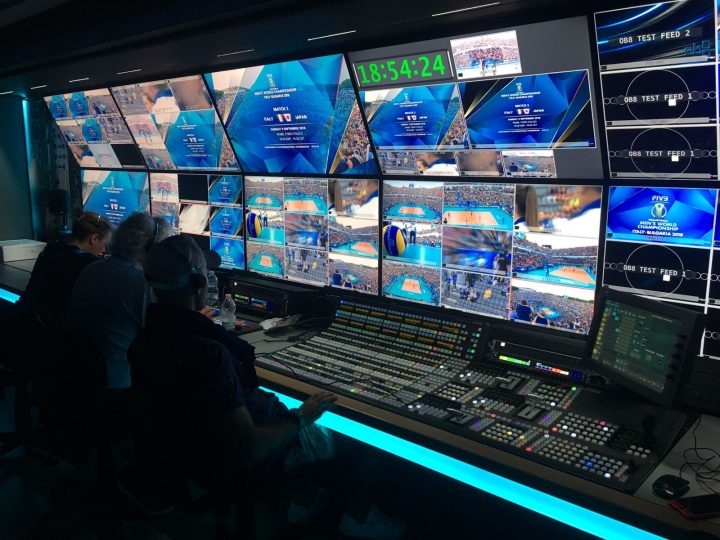 One of the first commitments for Global Productions’ new OB8 unit was the Ferrari Challenge held at Monza last month.

The first official outing of OB8 was in Rome for the World Volleyball Championships in September (pictured, above), while the first presentation to the major Italian broadcasters was the Monza race, where all the production power of the OB8 was unveiled in 4K UHD HDR.

Here the new mobile gallery was inaugurated, including three expansions along its entire length, wired for 30 UHD cameras, 10 EVS UHD and able to shoot in 4K HDR.

The project was developed internally by Global and has also come into being thanks to Chromaline, which carried out the wiring, with the works management and engineering in tandem with Global Production. 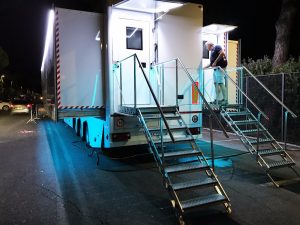 Vision mixing is provided by Grass Valley Kayenne and Karrera boards, in separate operating units on board the same trailer. The physical spaces are separated and the access doors and all air-conditioning and lighting services are separate. This means it is possible to operate on two different events simultaneously or to manage large events with separate onboard host broadcast and unilateral broadcast productions.

For the Ferrari Challenge, Global used 16 LDN 86N cameras along the circuit with footage in 4K UHD HDR and then realised the HD SDR down conversion for broadcast on Sky Italia. Although the broadcast was in HD, Global shot everything in 4K and then down-converted in HD so as to thoroughly test the whole system.

The production set-up for the Ferrari Challenge World Finals had 26 cameras engaged including 16 on the circuit, three radio cameras with Vislink 1080i50 links moving in the pit lanes and converted to 1080P50 and HDR inserted. The shooting set-up also included the signals of five Marshall HD 1080i50 cameras with Gigawave links arranged on-board in cars.

In addition, a 1080P50 RF linked drone was operating live positioned above the famous Monza parabolic and with its movements followed the arrival of the cars as well as offering spectacular visions of the paddock and the Monza park.

A multi-channel omnidirectional microphone from Soundfield was positioned on the final direct arrival and recreated all the ‘sound spatial presence’ in the surround.

On board the mobile unit, the audio mixer section includes Digico SD7B Q7 with expansion for 90 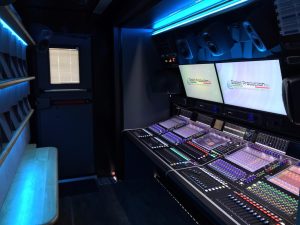 faders (main) and a Digico SD 12 for the second production with 24 faders. The intercom section consists of RTS Adam with 50 panels and 400 Madi ports. The graphics and timekeeping were realised by Spanish company Alkemei.

Turin-based Global Production is managed by Gilberto Steccazzini, together with Stefano Bianco and Davide Furlan. After a long process of selection of technologies and testing, Global’s new OB8 mobile trailer has been born.

Gilberto Steccazzini summarised the driving concept: “The technical architecture on board the new OB8 is the best mix of hardware that the market can offer today. We wanted to give our best in productions of great live events and we succeeded with this 14-metre trailer that is able to easily manage a complete native production in UHD HDR.”