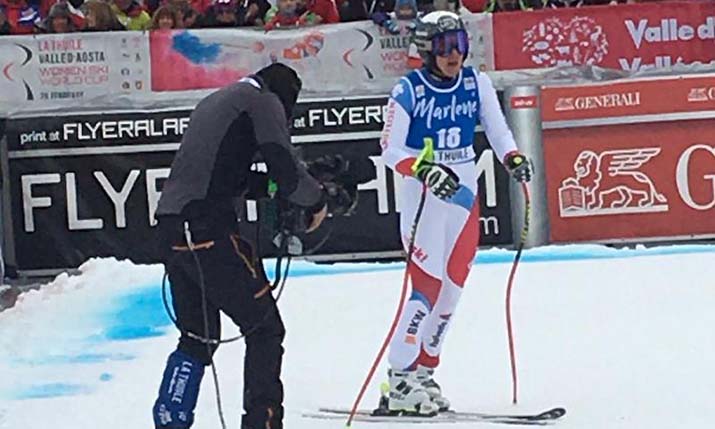 Athletic crew are a must for Alpine and Nordic ski events

The 15th edition of the Tour de Ski took place from 1 to 10 January across three locations in Switzerland and Italy. The event culminated in Val di Fiemme on Alpe Cermis, where athletes challenged themselves over a 10km course in the Final Climb as part of three days of events running from 8 to 10 January.

This was followed by the Nordic Combined World Championship on 15 to 16 January, with both proving interesting from a sporting and a technical perspective.

Euro Media Group (EMG) subsidiary, Global Production, which has a long heritage in the skiing world having been involved in the production of the Ski World Cup, alpine skiing and Nordic skiing in Italy and France, was called in to manage the production across all the slopes in the Dolomites.

Global Production, a super-specialised mobile production vehicles company, uses its powerful technology on the tracks of both disciplines, mainly utilising large OB vans that also manage remote control galleries. It has been following Tour de Ski events, on behalf of the rights holder and producer Swiss Infront, since 2013 (previously RAI took care of it).

This year saw Global Production deploy around 60 technicians and a helicopter equipped with Cineflex and two track quads that follow the athletes on the move and shoots images thanks to a light steadycam and radio links. A total of 38 cameras, including specialty devices, followed the action. 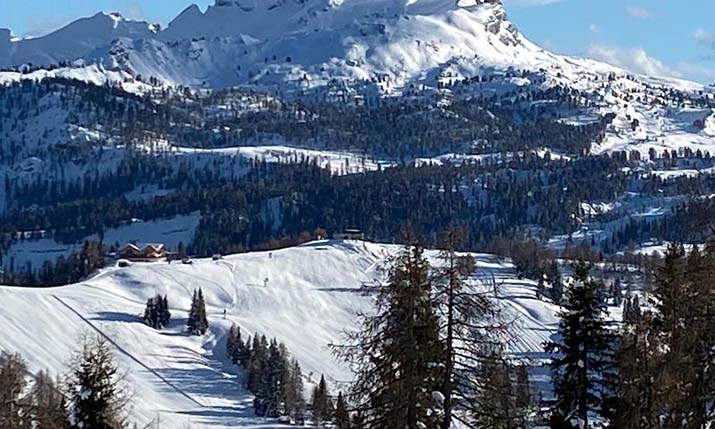 Taking in the alpine scenery

Indeed, the crews taking care of filming must have technical and athletic characteristics as well as artistic ones to carry out such difficult television production. The team must move on the same slopes that the athletes face and contend with adverse weather conditions, which were particularly severe this year.

For the Val di Fiemme production, a control room was established in Tesero in the Alpe del Cermis area and was completely remote operated by one of Global’s largest mobile vehicles, the OB6.

OB6, hired as the main gallery to produce the host broadcaster feed, guarantees the required distance between the operators on board, given the large internal square footage for each of the different control areas.

Moreno Roncon, technical co-ordinator at Global Production, explained: “In practice only the operators are on site. All remaining technicians, including the director and the satellite link broadcast equipment are almost 30km downstream.

“The typical problems related to the COVID pandemic led to the use of a very large vehicle, the OB6, to be able to guarantee the necessary distances between the various personnel on board. Then external spaces were prepared, where necessary, with special containers.” 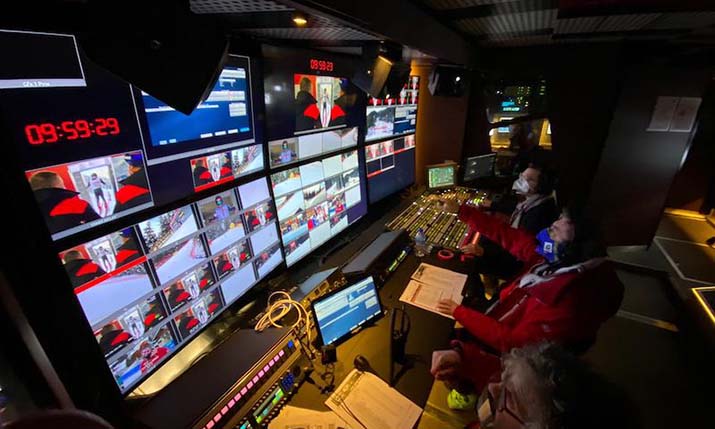 For the Val di Fiemme production, a control room was established in Tesero in the Alpe del Cermis area and was completely remote operated by one of Global’s largest mobile vehicles, the OB6

The set up was made possible thanks to 48 full fibre connections between the super galley, the MCR and the cameras, connected to special hub intermediate stations, multiplexed Riedel MediorNet and fibre-to-fibre conversion systems for system cameras.

Roncon adds: “Thanks to fixed connections, made with dark optical fibres and laid by Trentino Network that wired the valley, we could completely remote operate cameras, microphones, monitors, interviews and all the equipment in the trampoline jump area.”

In total three locations were involved, the Predazzo Ski Jump Stadium, the cross-country ski circuit of Lago di Tesero, where a mass start was performed, and the Piazza dei Campioni of Cavalese where the opening and awards ceremonies were held.

Complexity was also added by the fact that each race on each of the three days forced a change in the configuration of the technical set up that made live TV coverage on Eurosport HD and RAI HD possible.

Difficulties arose from the high number of cabled camera points used to satisfy the different disciplines on different days: the change of race from one day to the other required important set-ups inside the OB van to ensure the correct vision of the sources and the routing of signals towards replays, MUX and more.

Davide Furlan, co-CEO of Global Production, said: “Even though we have been super-specialised for years, the very high degree of complexity of these productions on the snow added this year to the unpredictable COVID-19 variable, making everything much more complicated and expensive.

“Unfortunately, each Local Organising Committee acted according to its own directives, each establishing which was the best health protocol to use and with obvious differences. The television service, by nature, must solve all problems related to the logistics of the crews and vehicles involved in production and we hire hundreds of people arriving from different parts of Italy for these events. Some come from home, others move directly from one venue to another, making the management of health protection very complex, given that we all have to and want to work safely.

“Thus, we had to solve emergency situations due to sudden positive swabs, operator replacements, provide backups, manage fearful staff who refused the engagement for fear of encountering difficulties in returning home: in practice it was a real nightmare for which there was no precedent and even less procedure.

“This year the achievement of customer satisfaction has taken on an even more qualifying value, there is no doubt.”

To find out more about winter sports production, sign up for SVG Europe’s Winter Sports Summit, a specially convened online event in which experts in producing and distributing coverage of sports such as skiing, biathlon, rallying and ice hockey will discuss the evolution of their workflows, outline new creative and production techniques and highlight the tools that can transform the winter sports viewing experience. Find out more at Winter Sports Summit.