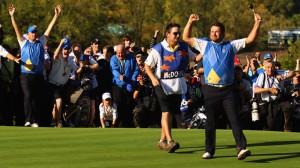 The Golf+ channel from Canal + will give French TV viewers more than their share of golf programming, including the Ryder Cup.

GOLF+, the first channel of the Canal+ Group, entirely dedicated to golf will be available to CanalSat (ADSL and Satellite) subscribers from 4 July and, in addition to its own golf programmes, GOLF+ will also offer all the American and European tour events, the majors, the Ryder Cup and the world championships.

Broadcast 24 hours a day and seven days a week, GOLF+ will also air dedicated programs and retrospectives in order to keep up with the news and history of the world of golf.

The major tournaments will be broadcast in HD.

“In addition to a reasonably small and specific technical set up, we will also benefit from the Canal+ sports services’ large choice of equipment,” says Luc Panier, in charge of internal production at the Canal+ sports division and project manager for the production of Golf+.

The channel will be completely tapeless and will make use of the Canal+ nodal point to receive feeds from all over the world (up to 42 channels).

GOLF+ will have its own HD production facility that includes a Ross Carbonite production switcher (with two multi-level effects systems), an EVS XT3 server with eight channels and a Chyron graphics system. The multi-screen monitor wall (consisting of Panasonic and Nec units) will have a Grass Valley Kaleido cascadable multi-viewer.

Several Avid editing suites (with Media Composer 5.5) will be at the disposal of GOLF+, as well as an Avid DS for calibration, Newscutter workstations and an interplay system. One of Canal+’s Protools mixing rooms may also be used if needed.

Editorial content management and archiving will be implemented in Edgard, the software program developed jointly by the sports division of Canal+ and IBM.

A small virtual platform with a green background is under construction. It will make it possible for a studio presenter to launch a program before it is broadcast or to hand over live to a journalist and consultant in the field.

François Roux who is the managing director for Sport+ and a keen golfer will also head the GOLF+ channel.