GoVision’s screens played a big role at the Ryder Cup last weekend, giving fans on the course the opportunity to keep on top of all the action via six large Panasonic LED screens with 8-mm pitch and four Panasonic Lighthouse LED screens with 10-mm pitch at the Opening and Closing Ceremony stage. A 2.5-mm-pitch screen was also installed in the Members Tent and International Pavilion, and GoVision also provided screens for the Ryder Cup Gala, held the night before the event.

“The Panasonic on-course screens are the highest-resolution true outdoor screen in the market,” says GoVision President Chris Curtis. “It has a really dramatic effect, and the viewing experience is great. The graphics were crisper, and, with the great HD broadcast, it was spectacular.” 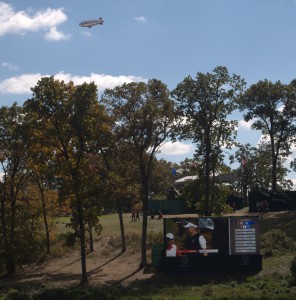 Panasonic LED screens were scattered around the golf course.

The 10-mm screens, which looked great given that viewers were sitting a bit farther away from them, were also recently used at the US Open tennis championships in New York City. The delayed final match in New York meant a slightly tighter turnaround, but the screens were up and ready to go the Friday before the Ryder Cup.

GoVision is involved with a number of other tournaments, and Curtis says each has a different need. Some want to use the screens to create a viewing amphitheatre (similar to what was done on the 17th hole at the Ryder Cup), and others want smaller screens scattered around the course to provide a less dramatic effect while still meeting informational needs.

“When we first went out for the Ryder Cup survey, we saw that putting a screen on the hill across from the 17th hole was a spectacular location, and so much drama took place on 17,” says Curtis. “And the screen near the 15th green required a structure to be built in the pond. Both those screens had hand-built structures to support the screens.”

Big Screen Network handled the production of the feed, with the NBC Sports network feed, additional cameras, and an information feed pulled together in a Grass Valley production switcher in the Big Screen Network production truck in the TV compound. Each screen was fed different information, and, when players were on a green or tee, a still graphic would be broadcast to prevent distraction.

“All our control gear is there as well,” Curtis adds. “The whole production is controlled from that truck while the Opening and Closing Ceremony were controlled locally with a flypack and Panasonic production switcher.”

The video screens played an important role in the spectator experience. More than 40,000 people on the course attempted to watch a much smaller number of matches than at a typical tournament, where players are spread simultaneously over 18 holes.

“Just like all sports, golf is battling the TV experience at home, which is so good right now,” Curtis explains. “So we see these screens’ getting bigger and better to enhance the experience of being on the course.”

One of the unique challenges at the Ryder Cup was connecting the fibre lines to the screen in the pond. After a few days of being up and running, the screen was taking some signal hits, and it was decided that the cable needed to be replaced. The culprit? Turtles in the pond chomping on the cable.