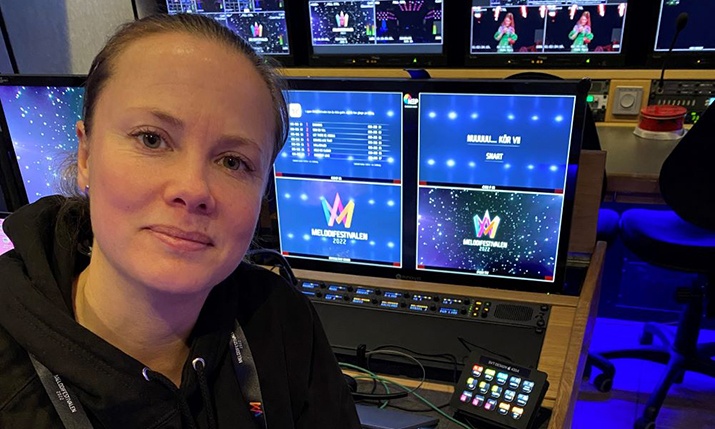 “Most of the times I came to the van with my graphics computer, setting it up myself and preparing for the game or competition. I came across some people who judged me in advance, thinking a young woman could never manage to do the job as well as the guys that normally worked as a graphics operator. I persevered though and kept working despite the people who were against me, and quite quickly managed to prove them wrong by doing a good job and becoming well known in the business.

“[I think it’s important to not] give up if you encounter difficulties or prejudices. Women can work with sports just as well (or better) as men,” she adds. 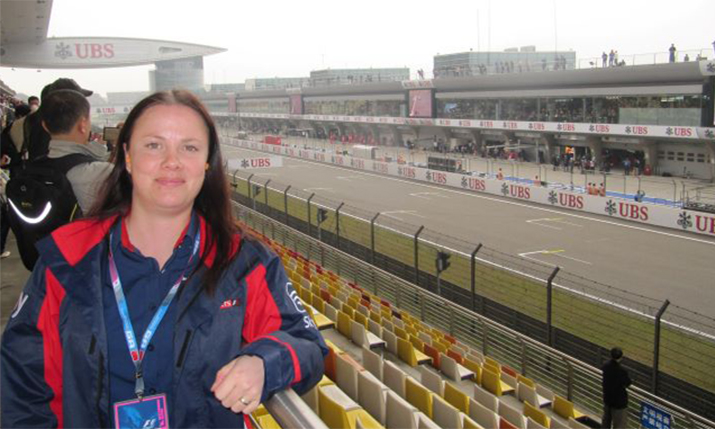 SVT’s Lotta Mallander at Formula 1 in Shanghai in 2012

Mallander has worked in graphics for years, ever since she discovered she was excited by and also had a talent for it. Once she discovered graphics, “it was a natural progression to focus on graphics in all forms, meaning I work with both ‘standard’ graphics and augmented reality (AR) graphics”.

“I always enjoyed watching sports on TV and to now be able to work with it and be there live on big championship or games is absolutely great. It’s like working and watching your favourite show on TV at the same time”

She continues: “My role today also means I’m both building and programming the graphics in preparation for live programmes, and acting as an operator during the shows. The job involves what I think is a perfect mix of hectic live shows as an operator, combined with calmer days when I’m programming and developing graphic templates.

“It’s really great to be able to feel the nerves during the live shows and to know that I myself am responsible for making everything work in the best possible way,” Mallander says.

How it all began…

As to how it all began, Mallander studied media at upper secondary school (gymnasiet in Swedish). After that she moved from the south of Sweden, where she was raised, to Stockholm where she studied for a short time at an independent school focused on TV production. While there she was able to try out a variety of roles behind the camera, from reporter to technician.

She notes: “To be perfectly honest, I have never had a sports broadcasting career as a goal. It has been a natural development in my job life. I have always loved all sorts of sports and ever since I studied media in school I have been interested in TV broadcasting, so when opportunities have presented themselves, I have taken all chances to work with projects that I find enjoyable, and that includes everything from big sport championships in football and handball, to small local games of floorball or junior ice hockey, to Eurovision Song contest and gameshows.”

After a stint as a reporter on a reality show, she moved to a company called Onside that collaborated with Svenska Spel (a Swedish betting company) and produced TV shows for betting shop broadcasts. That was where Mallander got her first taste of live sport productions with greyhound racing and football.

“I was about four years at Onside where I started up doing a little bit of everything, from vision mixer to EVS operator and graphics operator,” says Mallander. “Of all the roles I had my favourite was in graphics so when I moved on from Onside to a company called Hego it was as a graphics operator. I worked on Hego (now ChyronHego) for 14 years and developed my skills in graphics, both being an operator and also building the graphics templates, learning to programme and code and solve the technical bit along the way. In 2020 I got my current job at SVT and added AR graphics to my CV.

“Since my first job in tv broadcasting almost 20 years has gone by and have seen me through a lot of different sports, championships and TV shows of all sorts.” 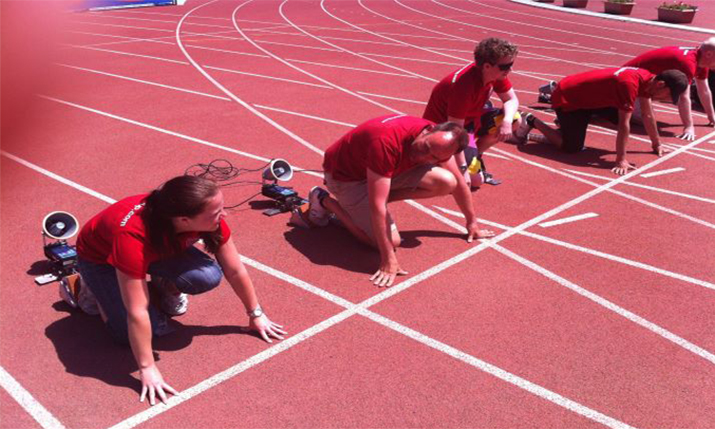 Gearing up for a graphic race, Lotta Mallander on the far left on the athletics track in Rabat, Morocco

Mallander comments on how her time at SVT has been affected by the pandemic: “I actually started my current job at SVT in January 2020 so I had to juggle both the difficulties of learning a new role with the difficulties that the pandemic brought. I’ve been working a lot from home when I’ve been preparing graphics and only went in to work for the broadcasts.

“Now in 2022 I’m hoping to be able to be on location for a lot more sports events again; I know that in August I’m going to work two weeks in München on the Athletics championship so that feels great to look forward to.

“Since I started working on SVT I have worked with the studio show Vinterstudion and in 2021 that meant the world championships in both skiing and biathlon. It won the Swedish TV award called Kristallen, and got nominated for an SVG Europe Sports TV Award 2021 for second year in a row.

“I have always loved watching Vinterstudion long before I got to work with it, so that has been great to work with and be able to enhance the experience for the viewers using both graphics and AR.”

As to what drives her to continue working in live sports broadcasting, Mallander explains: “I always enjoyed watching sports on TV and to now be able to work with it and be there live on big championship or games is absolutely great. It’s like working and watching your favourite show on TV at the same time.

“I love when I get the possibility to be on location for big sports events. Even if I mainly sit in a control room of some sort during the game or competition, it’s really something special to be there and see and hear everything. To be able to step out of the OB-van and go into the arena and share the atmosphere there is really something special.” 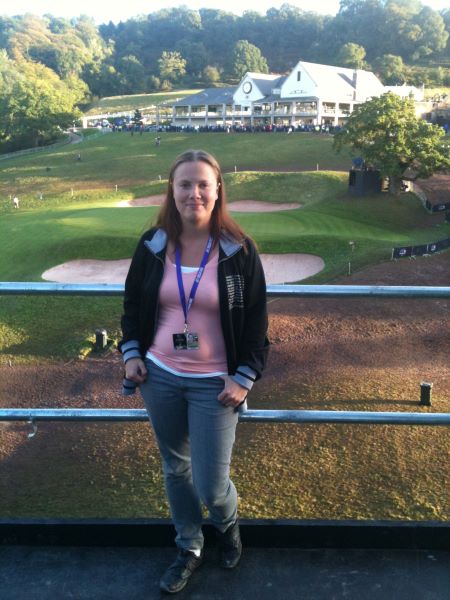 She adds: “The hardest thing is that you never know what to expect when it comes to sports, especially when it’s live. You always need to be alert and work fast to be able to produce the graphics needed in the tempo it’s needed. You never know if it’s the big favourite or an outsider winning the game or race so you need to expect the unexpected at all times. It’s always challenging with live sports where you can’t prepare much beforehand, and sometimes you wish you could see in the future so you knew who was going to win the game or race.

“No matter if it’s entertainment or sports, a live production is always quite hectic and anything can happen. Learning the role really involves learning to handle all situations that can occur and be inventive in problem solving.”

Concluding, Mallander comments on some of the highlights of her career: “I have worked with several European and World championships in handball, being in Norway, Croatia, Austria and on home ground In Sweden and those were all really fun. I have also worked with Formula 1 for Sky Sports and travelled to China, Spain, UK, Belgium, Japan and Abu Dhabi which were really cool experiences. One big thing in my career that didn’t involve sports was the Eurovision Song Contest that I did in Malmö 2013.”

Next up Mallander is tasked with building SVT a new AR graphics system which has to be ready to roll by April, when the Swedish football season and studio show kicks off. She says she is more than ready for the challenge.