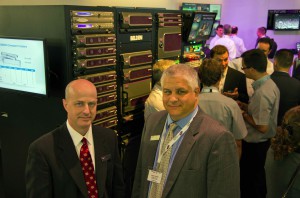 Thanks to Grass Valley’s takeover by Belden and its merger with Miranda, it now has deeper pockets and greater stability. “We have a unique opportunity to drive innovation faster than before,” said Mike Cronk, SVP of strategic marketing, Grass Valley at IBC this week. “We have an aggregate R&D power in terms of how much investment we can make, which we’re putting into such things as our IP strategies and creating an overall 4K workflow.”

It has also boosted the size of its service and support structure, with more people across the globe, and it is benefitting from Belden’s processes and organisation.

However, it has meant some changes, such as the end-of-life of both Trinix routing (going in March) and GeckoFlex modular signal management products (next month), with Miranda’s Nvision routers and Densité modular products being taken forward. However, all the engineering teams have been retained, so the Grass Valley products will get long-term support.

To make the transition easier, it will retain both the Jupiter and Nvision control systems, both of which can control either system, so that Trinix users will be able to expand their system with Nvision and control it with Jupiter. “The impact on customers has been minimal,” claimed Cronk. “We made these product decisions very early to give customers clarity.”

Customers with other products won’t be affected. “There was very little crossover between the companies. Trinix was the only line that we’ve taken this path with,” said Dave Cohen, director outbound marketing communications. “It was a very good merger from that perspective,” added Cronk.