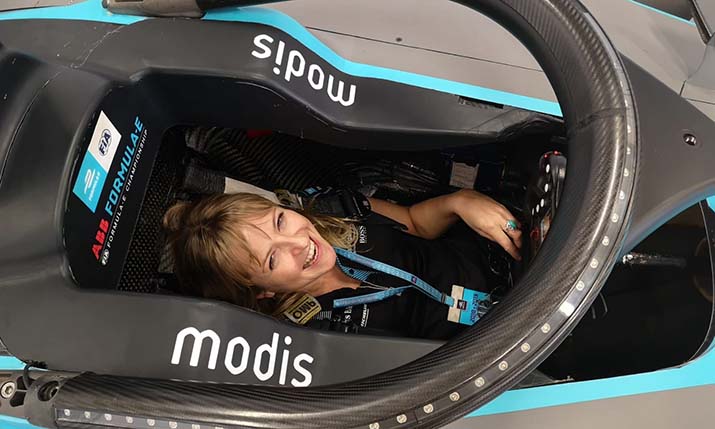 Inspired by 1990s TV shows Pole to Pole with Michael Palin and Challenge Anneka with Anneka Rice, Jenny Fuller aimed for a career in TV that would allow her to “travel the world and do incredible things”.

Fuller is senior broadcast manager at Formula E, the motorsport series that aims to make racing cleaner and greener. On why she chose sports broadcasting, Fuller comments: “Sport brings people together. Working in sports broadcasting means creating content for millions of people worldwide and working with colleagues from all over the globe. The stories and narratives that you create last for generations. It is a privilege to have this job.”

Last year, lockdown hit Formula E mid-season. The aim was to finish the season, which it achieved with six behind-closed-doors races in Berlin’s Tempelhof Airport in August 2020. However, during the intervening period, it delivered a regular Saturday esports series and created a new portfolio of documentary content for its broadcast partners.

It also brought forward plans to carry out part of its TV production remotely. Says Fuller: “A huge amount of work went in behind the scenes with the host broadcast team at FETV to re-work the OB to adapt to this. I’m also really proud of the bespoke LED wall podium and TV studio that we built for our Berlin event. It meant that we could beam in fans, dignitaries, sponsors and VIPs from afar and create a really iconic, socially distanced, virtual podium for our season finale.

“When Antonio Felix Da Costa won the championship and we cut to a surprise 9m-high live stream of his family watching from back home in Portugal, his reaction live on air made all the hours of planning worth it.”

She continues: “My lockdown was spent in hours of planning meetings and video calls as we re-grouped and worked on several projects simultaneously. It was a busy time and adapting to the intensity of remote planning from home was tough, but ultimately, I felt extremely lucky to be able to continue working.” 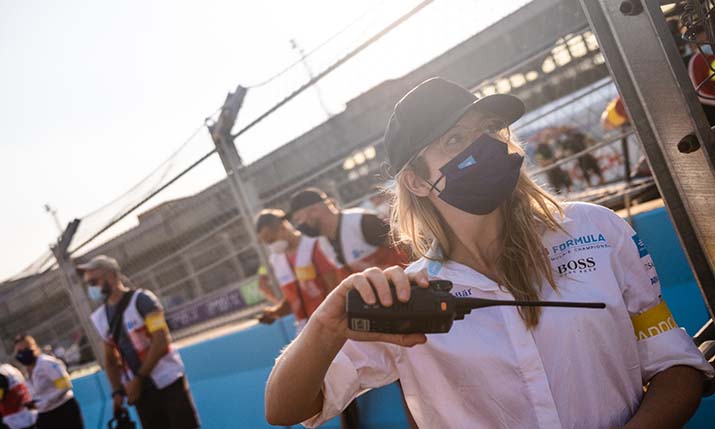 Lockdown has helped further Fuller’s skillset, she notes: “My role has always been about understanding what the industry has to offer and employing new technologies to enhance the broadcast product, but this year has been another level of fast-tracking new projects to support virtual and remote production. There has also been the addition of many hours of planning for how to work effectively and safely in a COVID-affected world. The challenges continue into 2021, so my team and my role will continue to develop and adapt.”

The London 2012 Olympics was the start of Fuller’s life-changing move into sports broadcasting. She says: “I moved to sport for the London Olympics 2012. I secured a role as a researcher, producing short features and documentaries about London for the non-rights-holders’ Media Centre. This job changed my life. I was introduced into the world of sports production and people who remain my colleagues, mentors and friends to this day.

“I went freelance in 2013, but kept my options open taking both content production and organisational roles and switching between factual documentaries and sports projects, not yet sure which career direction to focus on. As an AP on factual documentaries, I worked on some fascinating and varied jobs for the BBC, Discovery Networks and the History Channel (including tanks, planes and trying to solve cold-case murders). While in sport, I was learning the craft with projects on World Rally Championship, Glasgow 2014 Commonwealth Games and the America’s Cup.

“It was after landing an incredible opportunity planning the stories and logistics for the features team at the 2014 FIFA World Cup Brazil that I found my career path,” she enthuses. “The role of planning producer seemed to combine everything I’d enjoyed about my work to date; a focus on research and storytelling, combined with organisation and planning on a grand scale.”

She adds: “I’ve been so lucky to work with Formula E and on the Olympics, Commonwealth Games and many global sports, but the coolest has to be the 2014 Brazil World Cup where I joined the features team, creating short-films about the people of Brazil for the host broadcaster to distribute worldwide. The atmosphere and welcome from the Brazilians was a true testament of the power of sport to bring people together. The streets of Rio became a multicultural street festival every night. It was a very special event and an honour to be able to share the stories from it.” 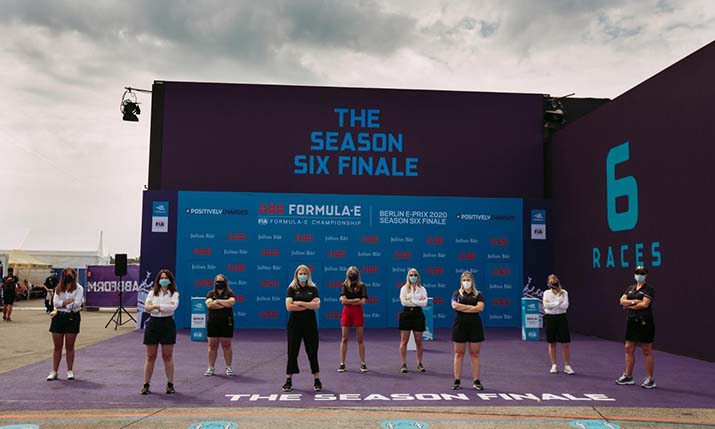 Her globetrotting ambitions continued, with a move to Fox Sports in Sydney, Australia, in 2015, line producing the breakfast show and news bulletins, “which provided invaluable learning around staying calm and being decisive under pressure in a live environment”, she adds.

“This was followed by dream-come-true freelance roles planning and scheduling content and crews for the Rio 2016 Olympics, the PyeongChang 2018 Winter Olympics, the 2018 Russia World Cup, and the 2018 Buenos Aires Youth Olympics,” she says.

From freelance to full time

LinkedIn took Fuller to Formula E and the world of full-time work, in the role of broadcast operations manager. She comments: “I liked the idea of taking all the skills and learnings I’d accumulated as a freelancer to focus on a full time role where I could make a real difference. As a young sports organisation, Formula E offered the opportunity to shape the future of a broadcast product. In sport, a role like that doesn’t come up very often.”

On the interviewing experience, she reminisces: “I think it’s tough going for a job interview when you really, really want the job. I remember trying to stay cool because I was worried I’d come across as too keen. I had also lost out on a couple of full-time job roles because I’d been a freelancer for so many years; employers questioned why I would want to give up the flexible lifestyle.

“Luckily my new boss saw my freelance traits of being used to frequent world travel and embracing change as positive skills that would work well at Formula E. Two years later, and with a promotion to senior broadcast manager, I can safely say that switching from freelance to full-time employment was a good career decision!”

Formula E comes with logistical challenges, which Fuller must help solve as part of her job. She explains: “Formula E races on city streets around the world, not in a controlled stadiums or racetracks. The planning, the build and the execution of every race in our 12-event calendar is unique.

“The hardest part of my job is always the thing you didn’t know to plan for and have to solve on-site,” she says. “I’m very lucky to have an incredible team around me working behind the scenes to deliver race broadcasts; they can find a technical or logistical solution to anything!”

She adds: “The trickiest part about learning the job, is that when working for a start up the learning process keeps going. Every week my team are presented with a new challenge to solve. Being OK with the unknown is a big part of the role, and this adaptability was tested more than ever when lockdown hit in March.” 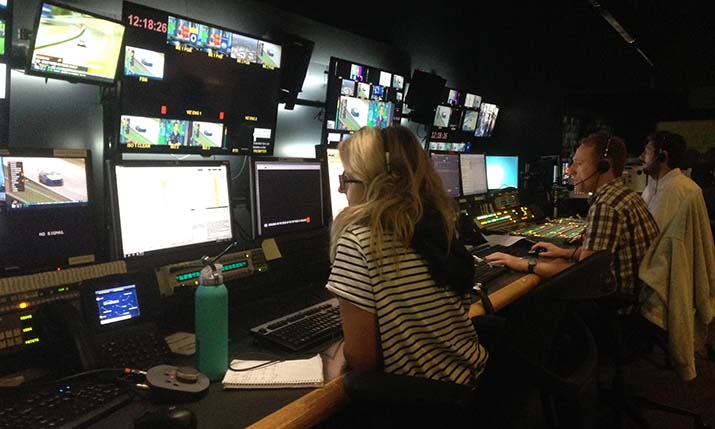 Jenny Fuller in the Fox Sports Gallery for Formula E

As to how she started out in TV, when she finished university, Fuller found herself in the 2008 recession and struggling to find a role in TV. “I subscribed to every job site and wrote personalised letters to dozens of companies. It took six months before one replied with a three-week runner job. Luckily, that one role turned into a year of employment as an inhouse runner working on entertainment shows like Eggheads and Coach Trip,” she says.

Fuller goes on: “Starting in formatted television meant that I was given invaluable training in researching and the lost art of ‘phone-bashing’, sometimes speaking to 200 to 300 people in a week to find and develop contestants. I loved working on a full production cycle, from the programme’s development, to casting, country-wide auditions and then filming. It was exhausting but so rewarding to see all the work come together and I was proud to see contestants I’d supported through the process make it on to screen. Although, I will never forget the negative bits of being a runner with never-ending coffee runs and many menial chores. These are the memories that keep me humble!”

British TV show Cash in the Attic was the gateway to broadcasting, Fuller says: “Despite telling everyone at school that I was going to be an RAF pilot to explore the world, when the time came to join the air cadets, I realised that I preferred the school theatre club instead.

“I studied drama at university and was heading down the performance route for a while, but then took a work experience placement on a famous daytime antiques-based TV show. I enjoyed finding out about the process of how an episode of television came together and being part of a crew. I switched my focus to a career in TV production and never looked back,” she explains. 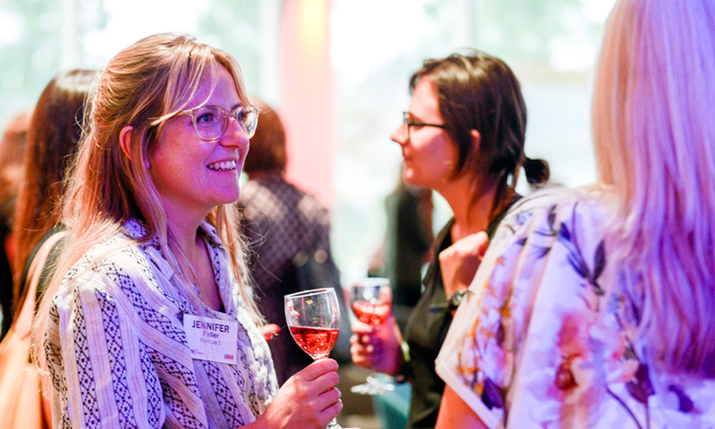 Formula E, along with its strong core focus on sustainability, has a diverse staff, in that around half of its team are women. While Fuller is proud of this percentage, she adds: “In former roles in sports broadcast there have been times where I have been the only woman on the production team. I have learnt that when you are in the minority, it is hard to change the system.

“As I progressed through the industry, I realised that I was spending so much energy on trying to affect positive change and share new ideas, but that I was often pitching to a closed male crowd,” she continues. “To feel comfortable to speak out and be at your most creative, you need a team around you who you trust and who will support your voice in a room.”

SVG Europe Women has been influential in helping to shape Fuller’s perception of herself, and of those around her, she notes. “Attending talks and events like SVG Europe Women has helped with building my confidence and vocabulary to openly discuss diversity and inclusion tactics in a work environment. It took some months, but I started to ask at interviews what the make-up of the team was, and seek out projects with awesome women already involved.

“I also established a group of female mentors and friends in the industry,” she continues. “We bounce around ideas, share job opportunities and back each other’s projects. Having talented industry women supporting you, enables you to have the courage to pitch in a meeting, trust in your own ideas and stand up for what you believe in when challenged.

Fuller’s advice to other women looking to move into a role in sports broadcasting like her own, is: