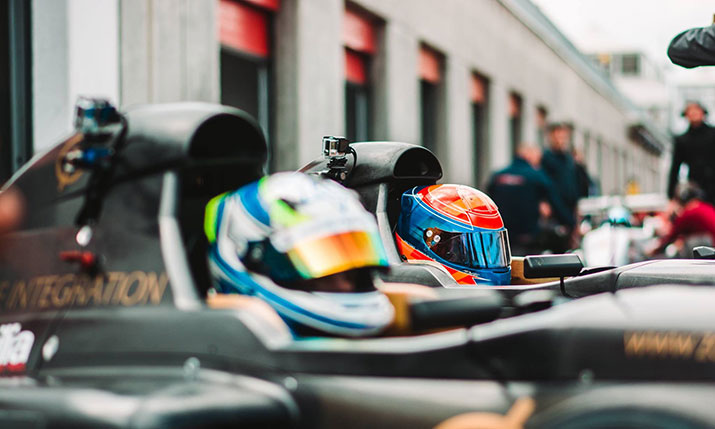 Many observers believed Formula 1 was overdue for broadcast re-invention when Liberty Media took it over a couple of years back but Griiip, the start-up behind fledging motorsport series G1, aims to show that the apex of the sport has stalled on the grid.

Initiatives of the new G1 Series, which begins in early April, include drivers competing in virtual simulator races for championship points; a complete low budget data-driven live streaming production; free online access to all footage collected from each race for creation; and sharing of user-generated content.

“The problem with F1 and all motorsport is that coverage suffers from a lack of engagement and intimacy. Viewer’s don’t want dry data. They want the story and the juice. 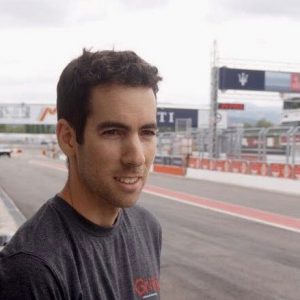 “The problem with F1 and all motorsport is that coverage suffers from a lack of engagement and intimacy. Viewer’s don’t want dry data. They want the story and the juice. They want to feel really connected to the emotion of the sport and its stars.”

Griiip is an Israeli company, established in 2015 to design and manufacture race cars targeted at the entry-level racing market.

Founder and chief executive Tamir Plachinsky, who is a mechanical engineer, says Griiip “acts as a development platform and gateway for new technologies into the world of motorsport.”

The company’s G1 single-seater series, which is powered by an engine from Italian motorcycle company Aprilia, made its debut last July in the inaugural G1 Series.

“G1 2018 was an internal pilot mainly for us to see if the concept was feasible and working,” says Agam.

“2019 is a step ahead. It’s not yet a mainstream series but it will be the first season of an official series.”

Fourteen drivers, some as young as 14, will compete in seven races from April to November on tracks in Italy, beginning in Cremona.

“Northern Italy is the hub of world motorsport,” he says. “Motorsport culture is very active here. Its roots go way back and we think it’s the perfect place to start a series in Europe.” 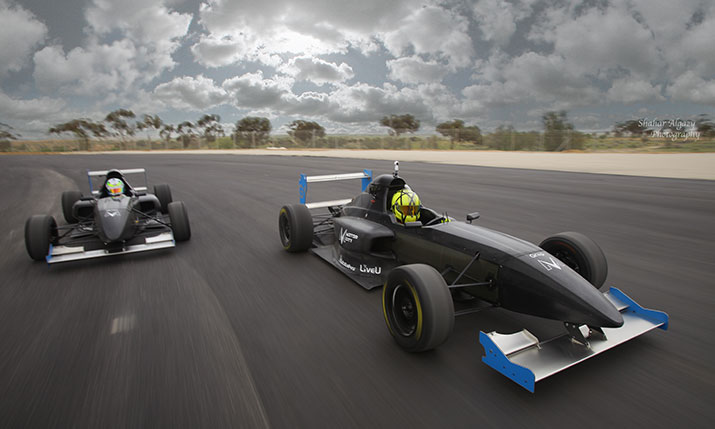 While Formula-E has its drivers compete in an esports event at e-Prix and makes use of fan-powered social media to give drivers a speed boost during races, G1 has gone further and put virtual races on par with the track.

Using simulations of some actual G1 race venues (such as Autodromo Riccardo Paletti near Varano in Parma which is also Griiip’s test circuit), drivers will compete head to head in simulator games. They will score points (half those scored for real-world races) toward the Championship.

Says Agam, “We’ve modelled the G1 car for course simulations and are continuing to fine-tune its behaviour to exactly match the real car. This is the first step toward a more open approach between fans and the sport.”

Race sims are already used at the top level of the sport as a training aid.

Agam says Griiip has set up a dedicated server for the virtual G1 series for drivers to compete online. It doesn’t build the simulators or write the game software but it does set the rules and recommend drivers wear VR headgear to get the best experience (for checking the virtual car mirrors, for example).

“There is a whole world of gamers playing race simulators but until now it’s been quite disconnected from real racing. The stars of virtual have never driven a real car and vice versa.”

Griiip is also running a separate G1 virtual series that is open to the public.

The plan is that the winner will be offered some way of transferring “into the real world and to participate in the G1 series,” Agam says.

“The top virtual driver will get a taste of the real thing and maybe with enough backers also get to compete in G1.

“There is a whole world of gamers playing race simulators but until now it’s been quite disconnected from real racing. The stars of virtual have never driven a real car and vice versa. We’re taking this community of really good simulator racing drivers and trying to create a community in which real and virtual drivers are the same.”

Griiip makes all the real cars so that drivers start with a level playing field. Cars can be bought for around €50-60k (or leased) and are operated by a small team with some drivers privately funded). They have a low life-cycle cost rather than the very expensive team of specialists required in other Formulas.

Although drivers have some flexibility on tuning, tyre pressure, dampers and springs and geometry the idea is that the driver’s performance will shine through, rather than the money behind designing an engine or perfecting aerodynamics.

“In all motorsport, the richer you are the more chance you have to win. Money can buy you a faster car. With G1 you get the same car so young aspiring drivers who are not millionaires will be able to make the move from carting to an open-wheel racing event and attain their career goals.”

If they do well, G1 drivers can look to get additional sponsorship for the next season’s races.

Each G1 car is equipped with 33 sensors, data from which is uploaded from the track to private cloud. What is unique, according to Agam, is the way in which Griiip is interpreting the data to form fresh editorial that informs the audience about the race.

“We are trying to tell the story of the race to the average viewer so that they can experience motorsport like a pro,” he explains.

“We’ve developed the data analysis and graphical tools so that a viewer is able to understand, from one glimpse of the screen, what is going on in the race and understand the context of the action. We generate a driver specific graphics layer so when you switch the video you switch the data. So, if you the director chooses to show driver number 1 you will see that driver’s telemetry, and switching to driver number 2 will automatically sync driver 2’s data charts.”

There are no sensors on the drivers themselves, but this is planned for 2020.

“It is surprising how much you can learn about a driver purely from car and geolocation data,” he continues.

“In boxing, we don’t know the mind of the boxer but by observing them good commentators can help us with insight. Race cars have so many sensors that we can understand things like how aggressive a driver is, their virtuosity, their confidence or nervousness at different times in the race, or under pressure, and how that changes throughout a session or a season.

“You can understand so many emotional aspects and tell stories with this information – provided you know how to extract and interpret the data.”

For this season the algorithmic interpretations are being done manually and using pre-race data.

“AI – or rather machine learning – is absolutely the next step. Machine Learning is our goal which we will introduce toward the end of the year.”

Agam says Griiip had devised software allowing end-users to switch between driver feeds but decided to drop it.

“When you watch a race you want someone to tell you a story. 99.9% of viewers don’t have the capacity or motivation to tell themselves the story of the race in real-time. They want to be informed about what is happening.”

F1 has helicopters, so G1 has a drone. Where F1 has onboard cameras, G1 has fitted each of its cars with a GoPro and two microphones.

Like F1, it is able to overlay live graphics for speed, rpm, gear and track position but it has proprietary software that syncs the data and the video “at a fraction of the cost.”

A key partner is LiveU which is providing LU200 portable transmission units weighing 500 grams for each GoPro and a LU600 camera-operator unit for coverage of the event including pitlane.

Says Agam, “We’re not reliant on installing technologies at the track but on cellular data transfer. We are working with LiveU because it does live links better than anyone. They are able to transmit HD video from any spot on the globe, very reliably, by splitting the signal between up to four cellular modems and combining them on servers without almost any infrastructure needing to be installed. If we need more cameras or more drones, we just add a LiveU.”

The system is essentially set up as a remote production allowing Griiip or other production teams to switch feeds and produce the live event from anywhere.

“Broadcasting from another country to that of the race is a non-issue,” he says.

Griiip plans to grant free access to its servers to any viewer post-race for generating their own content. That’s in stark contrast to Formula 1 where Liberty Media is facing a backlash for placing more and more of its content behind a paywall.

“You can go to all the source footage and data after the race from any event and edit your own video,” Agam explains.

“No fan of any sport has access to everything that was broadcast let alone everything that was not broadcast. We will enable them to take any footage to reconstruct the event from their point of view, to focus on a driver or on technical aspects. They will have full control. No-one gets that in any other sport.”

It’s all part of the strategy to connect fans to the event. “UGC will be far richer as a result,” he says.

SVG Europe also learns that Griiip has signed its first broadcast deal. It’s with an Israeli sports channel which will take live and VOD (Agam calls it “off live”) for its website, mobile and TV.

“We are in advanced negotiations with a big US broadcaster,” he reveals. “There’s also interest from Russia and the UK.”

The first races of 2019 will be live streamed to Facebook; later ones to the G1 series’ own website.

Virtual races will be streamed live too. “We want to make virtual races as similar as possible to the experience of the race so that by the end of the year you won’t necessarily be able to tell which is real and which is a simulation.” 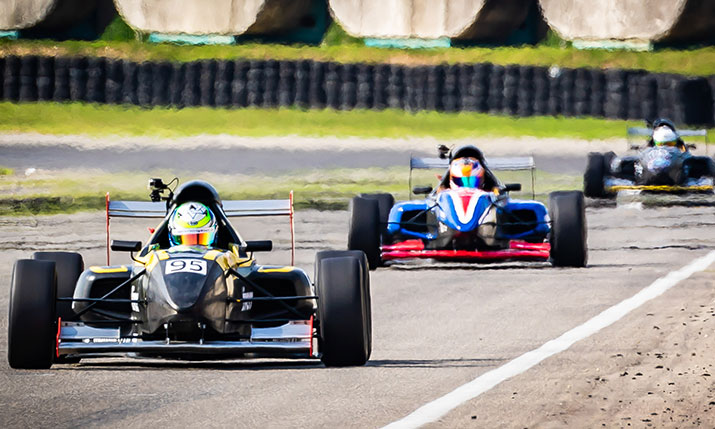 G1 and the FIA

The G1 Series has been set up outside the FIA and in competition to the Automobile Federation’s lowest rungs.

“The type of car we chose to develop adheres to the US standard F1000, a category which is not part of FIA,” says Agam.

“If we take our car, which is 400kg in weight and delivers 200hp and try to match it to FIA rules we’d have to add 100kg and reduce the horsepower by 50hp.

“We want to keep own car since we consider it superior to the entry level (Formula 4) of the FIA.”

There’s another reason too. “The FIA is a big global organisation and we are small and agile but if we want to stay ahead of the market we need to operate outside of the FIA. That’s not to rule out our technology appearing in an FIA event in future or the FIA linking with G1.”

“Our advantage is that we can compete roughly in price with carting per season for an experience that is better than F4,” Agam says. “Our vision is to be a very good alternative to the standard ladder of the FIA.

G1 drivers for this season have either come from carting or F3 and F4 series “where they’ve not had the money to continue to participate,” he adds.

“When drivers arrive in G1 they don’t think it’s an experiment. They think participation can seriously help them to progress to achieve their career goals in motorsport.”