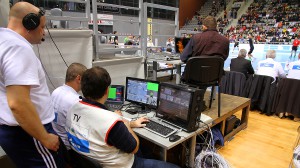 Streaming solutions in the palm of your hand: Streamstar’s WEBCAST CASE in use at the South Stream Handball League in Osijek, Croatia

We are living in exciting times for sports broadcasting, with new technology able to reach a wider fan base and offer coverage of a greater variety of sports than ever before, writes Streamstar CEO Rado Toth. There’s increasing demand for multi-camera live productions of the highest quality from both club owners and fans alike, while support for lesser-known sporting events is experiencing unprecedented attention.

At the same time, TV as we know it is becoming more computer-based, offering more user interaction via touchscreen tablets and mobile phones, either as a replacement for, or alongside traditional TV viewing. With such second screens growing in both size and demand, there has never been a better opportunity for sports broadcasters and rights’ holders to produce compelling live streaming content for multi-screens. Therefore, keeping in mind ever-tightening production budgets, it is vital for broadcasters to implement recording and streaming systems that are both cost-effective and proficient to deliver a seamless workflow, while still retaining quality across every level of sports programming.

Much of the upscaling of demand in the sports market has been driven by an increase in the use of IP-based broadcast contribution and distribution systems, which offer end-to-end file-based workflows that make it easy to provide streaming coverage to a variety of web devices. Content can be accessed anywhere and at any time there is an internet connection. Systems like these offer a disruptive change for sports broadcasting, yet also an opportunity to new media companies.

The standard for multi-camera live sport productions remains the OB truck route to transmission, with the signal pushed to an encoder and web streams for online delivery. However, the use of such infrastructure raises many issues, not the least being that the substantial levels of technically-skilled personnel to support it can only be commanded with access to larger budgets. In contrast, Streamstar’s WEBCAST family of live production solutions, ranging from affordable hardware that runs on an ordinary PC to dedicated workstations with touchscreens, enable anyone to easily produce and stream professional multi-camera video productions.

Just the act of sending a SNG truck or flypacks to multiple locations across the globe – to cover a home team on an international tournament, for example – requires substantial investment. As well as the cost of organising satellite uplinks, there are extra considerations to take into account, such as permits, security, parking and crew accommodation, as well as finding a suitable location with clear lines of sight for microwave links and satellites. Robust communications also have to be put in place for directing the action from the production control hub or MCR. Then there are health and safety concerns, such as long cable runs for the multi-camera setup. These extra considerations, as well as unforeseen local engineering issues, can put unsustainable pressures on a tightly-budgeted production and that’s even before the signal is encoded and distributed online.

If broadcasters instead choose to go down a purely IP-based route, with cameras able to upload streaming footage directly to the internet, they can instantly wipe out many of these associated ‘on-location’ costs. Video streams from IP-connected cameras based anywhere in the world can be sent via the internet back to the MCR at broadcaster HQ, which allows for a far more flexible and cost-effective localised setup. Integrated communications systems over IP also ensure that onsite camera control remains in the hands of the offsite production team, no matter where they are located in the world. Our systems, for example, can accept four unique simultaneous IP video stream inputs, as well as additional HD-SDI cameras and HDMI/DVI inputs for stills, graphics and external feeds such as score generators. The system itself switches the camera inputs as required; it also offers automated preset modes such as crossfades and transitions, as well as applying downstream key graphics such as lower thirds overlays and logos. With systems like this, you have production control in a box, able to be sited anywhere with an internet connection.

Similarly, expensive onsite instant replay and slow-motion systems are no longer the preserve of the major satellite sports broadcasters with a team of dedicated operators; IP-based systems like ours can automatically create such functionality using the streams from each camera, quickly and easily applied to the WEBCAST by one operator. Content providers should be able to further monetise such content by adding unobtrusive commercial overlays and logos within replays and other elements of their streaming production, to generate additional revenue through onscreen advertising.

When it comes to output for streaming, a system based on video over IP is already ahead of the game. Our systems go one step further, offering on-board H.264 encoding and a multitude of streaming profiles for popular CDNs, so that broadcasters are able to use the highest quality HD streaming content instantly in a live program, at up to 1080p @ 50/60fps and data rate of up to 10 Mbps.

Another key issue facing today’s global coverage of sports is the time difference. Advertisers want broadcasts to take place at prime time with maximum viewer capture, which is not always possible when the sporting contest is taking place halfway across the world. With stream recording and integrated media management, today’s IP-based systems are able to schedule playlists of edited material for broadcast at any time; it’s also very easy to stream highlights from recorded replays during a sports event break and pre-recorded interviews to enhance a live webcast.

All of this can be done at a fraction of the cost of traditional OB broadcasting, allowing for any size of sports fixture, in almost any location, to be broadcast online. One of Streamstar’s high profile customers, Huste.tv, is the biggest online sports portal in Slovakia, which is owned by one of the country’s largest TV stations. It has 12 production teams with a high-end logistics process covering several major leagues in central Eastern Europe. We collaborated with the team and designed, equipped and built the entire infrastructure system, which has helped produce over 5,000 live events for the portal over the last three years.

I’m not saying live streaming will totally replace traditional sports broadcasting; rather I foresee there will be greater segregation of the broadcast market. We are confident of an increasing demand for streaming technology, changing the way productions are transferred and offering endless possibilities for multi-camera productions broadcast to an IP network.