Guest Comment: Tom Ellis outlines a ‘week in the life’ of a NewTek 3Play operator 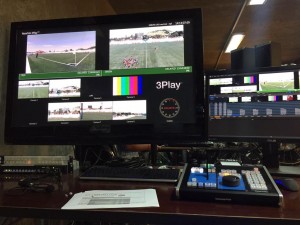 As a certified NewTek 3Play operator Tom Ellis has a great deal of experience running high profile 3Play jobs. Here he discusses the kind of different set-ups, workflows, features and functions that are needed for a typical week in the life of a 3Play operator, providing instant and slow motion replays and more for sporting content…

“I try and work on sport as much as possible as I find the industry incredibly focused on creating great looking productions. Generally speaking, people working on these productions are fans of the sport itself, creating a great working environment. I started using 3Play around three years ago when I had to jump in at the last minute on an MMA [mixed martial arts] show. I really enjoyed the experience and decided it was something to pursue, so after trying a few different roles I returned to 3Play operation.

“The array of productions I work across really varies: one day I will be an operator on handball and then football the next – it never gets boring! One week during this season, I was working on the T20 Cricket Middlesex and Lords as well as Matchroom Boxing on Thursday, the T20 Cricket Essex on Friday, the Arsenal FA Cup Screening on Saturday, and then the Arsenal FA Cup Trophy Parade on the Sunday!

“One benefit of using 3Play across such a versatile range of jobs is that it is really flexible and easy to set up. It works equally well on both smaller and larger sports, and gives me the opportunity to play with its varying features and see which ones work best for different situations so that I can fine-tune its usage to the job in hand.

“In a typical week of sport during summer, I’ll use either the 425, 440 or 820 models of 3Play. As with any freelance work, sometimes I’ll be very busy and find myself rushing, particularly during the high sporting season. Despite this, the intuitive functionality of 3Play ensures I can provide consistent, professional looking content across the different environments.

“Each job differs, of course, but the normal set standard of work includes running replays across multiple channels, editing on-the-fly highlights, and supplying graphics to the mixer as well as closers and running in VTs. Most clients with previous production experience expect an EVS, yet 3Play is able to give them the same standard of replays expected through its simple user interface. As well as offering instant replay and slow motion across a variety of sports, there are additional features that aren’t actually available on an EVS, such as being able to attach metadata to clips. Not only does having a GUI make replays and on-the-fly highlights incredibly easy to produce and edit, but the system is also able to ingest footage via USB import in whatever format is provided.

“Along with replays and highlights, I also utilise features of 3Play to route audio input across 3Play from within the GUI. 3Play’s capability of doing this without the use of a router is a great help, as is being able to duplicate sound inputs across ISO recordings.

“Since summer, my workload has not slowed down and I have found my 3Play services becoming increasingly in demand. Since July, as well as working on London Live Boxing, Chelsea Under 18 and Norwich and Aston Villa Pre-Season Football, I also now provide international and domestic training on the various 3Play models on behalf of resellers and production companies. Recently I have been training in Kabul, Afghanistan on the Afghan Premier League, and in Nigeria where I trained a number of people to operate and engineer the 3Play 420. The future operators all had varying degrees of VT and EVS knowledge but none had utilised 3Play before – they all commented on how accessible it was to operate.

“Working in the sporting industry, versatility is really essential to the job, and 3Play makes the working week a whole lot easier.”