Guest Comment: Why brands are waking up to the advantages of live video 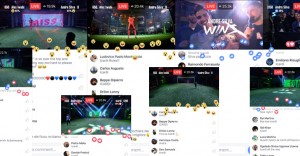 Over the past few years, the popularity of live video, both for viewers and producers, has grown exponentially, writes Jake Ward, Business Development Director, Groovy Gecko. According to Forrester Research, live video receives three times the amount of engagement than those that are prerecorded. From what I’ve seen, high quality live video appeals to viewers as it is generally more interactive and provides access to places or people they wouldn’t normally get chance to interact with. It also fosters the belief that it is free from commercial influence, or at least more so than adverts within traditional linear television. Of course, certain live videos may well be highly scripted and rehearsed, but the effect remains unchanged. We also know that most content on social media tends to be viewed as more trustworthy and unmediated.

Even the type of engagement on live videos is more meaningful, as live streams tend to receive more comments than prerecorded. Clearly, live video is much more engaging by nature, as those watching are able to interact in real-time, as opposed to static streams where there is no real reaction to comments made.

On the other hand, it is not always appropriate for brands to ‘go live’. Doing so for the sake of appearing forward-thinking can be a waste of valuable time and resources, although luckily quite inexpensive compared with other marketing tools. When used correctly, live video is just that, an effective marketing tool.

Without a doubt, we’ve noticed a trend towards more and more brands and organisations embracing live video to good effect. Waitrose recently broadcast a pancake making masterclass, Land Rover has live-streamed test drives of its vehicles. But lately we assisted Nike to live stream a one-of-a-kind event for the launch of its new football boot, Hypervenom 3.

The Hypervenom 3 is a radical innovation in boot design, requiring an equally innovative launch. The boot is designed for two critical components of goal scoring, namely cutting and striking. According to Max Blau, VP of Nike Football Footwear, it’s “the ultimate finisher’s boot”. As an update to the previous Hypervenom boot, it features a shift to Flyknit and is the first Nike football boot to contain a hyper-reactive plate featuring flexible Pebax® material. Hypervenom 3 is also 17% lighter than its predecessor.

To reflect the target market of the boot, Nike decided to hold a ‘Strike Night’, the winner of which would be crowned the ‘Ultimate Finisher’. The high-profile event featured a head-to-head goal scoring competition between some of the world’s most popular footballers, including Marcus Rashford (recently called up the senior England squad), Alex Oxlade-Chamberlain, Christian Benteke and André Silva. Didier Drogba and Ian Wright also took part as judges.

The idea was simple. The ball was delivered to players who then had a moment to freestyle before attempting to beat the keeper and score. The greater the finish, the more points were awarded by the judges and the unique digital goal created for the event. Thanks to our interactive polling feature, viewers were also able to get involved and influence the competition by voting for the player they believed had the most flare. Viewers were able to award a bonus 500 points to a player by clicking on the appropriate reaction (for example heart, like, wow etc.).

Interactivity has always been key to the success of live streams. We know that social media sites, like Facebook, have an unrivalled ability to expand the reach of content by targeting the ‘soft’ audience. In other words, the audience which would not necessarily have seen the content if their Facebook ‘friends’ hadn’t. If a viewer interacts with a live stream, their friends will be shown the content on their newsfeed and will hopefully watch it too. By default, live feeds are much more likely to encourage engagement and the Nike Strike Night was no different. When a viewer believes his/her actions can change the course of the stream, there is a much bigger incentive to interact with it. Given that the stream currently has 19,000 comments on Facebook, this seems applicable.

Whilst overseeing the 12-camera shoot, we at Groovy Gecko also distributed the feed via multiple platforms including Facebook, VK and Twitch, again increasing the reach of the Nike stream. The success of the error-free stream was evident from the reaction of the viewers and from wider social media. In total, it reached 2.8 million views and 8,269 shares on Facebook alone. André Silva took home the title of ‘The Ultimate Finisher’ and Hypervenom 3 had exploded on to the scene.