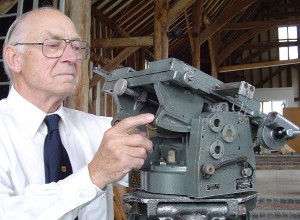 Bill Vinten has committed to helping next-generation camera professionals with a University Award.

The Guild of Television Cameramen, in co-operation with Bill Vinten, has established the Bill Vinten GTC University Award to recognise universities and graduates who demonstrate outstanding camera craft skills. The award includes the Bill Vinten University Trophy for the successful graduate’s faculty, college, or university.

A former lighting cameraman, Bill Vinten OBE was the driving force behind the globally acclaimed television-camera pedestals and pan/tilt heads which Vinten has manufactured since the 1950s. He was presented with the GTC’s Television Cameramen’s Award in 2010 for his lifetime contribution to fostering and improving the art and craft of the professional television cameraman.

“Bill Vinten has staunchly supported the Guild of Television Cameramen since its inception and is again showing his personal support and generousity by making this award possible. The Guild will forever be indebted to him,” states GTC President Dick Hibberd.

“The future and success of our craft relies not on the quantity but on the quality of new entrants,” adds GTC Chairman Graeme McAlpine. “Bill Vinten’s generous offer will allow recognition to be awarded in the most advantageous way to encourage and champion a successful career in camerawork. While craft skills can never replace content, craft skills will always enhance content.”

The Guild of Television Cameramen is an independent non-profit-making international organisation that cares about TV camerawork and the people who make it their craft. The GTC has more than 1,000 members in Australia, Europe, Russia, Singapore, South Africa, and the USA. The majority work in aspects of television ranging from corporate video production through news and current affairs, sports and light entertainment, to documentary and drama.

Run by a council of volunteer television professionals, the GTC is financed by subscription from its members as well as sponsorship from equipment manufacturers and suppliers. As a result, the GTC offers a channel for manufacturers to consult with working cameramen when designing new equipment. GTC membership is open to anyone employed as a television camera operator or in any associated occupation.