Timeline Television worked with FilmNova on the new London Landmarks Half Marathon, providing an innovative 4G bonding solution for all the live cameras. 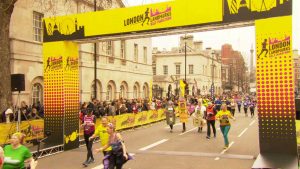 Timeline provided seven cameras, three on bikes and four handheld, all connected across Mobile Viewpoint’s 4G bonding system to capture images of the runners as they progressed around the course. The pictures were fed back to Timeline’s Ealing broadcast facilities where FilmNova used the gallery and commentary facilities.

London Landmarks Half Marathon, owned by baby charity Tommy’s, was the first of its kind to go through both the City of London and the City of Westminster. The race took place on 25 March.

An exclusive live broadcast of the race was available on the Evening Standard’s Facebook page that started at 9.15am until around 12.45pm. Radzi Chinyanganya presented and conducted interviews whilst commentator Rob Walker, in the Ealing commentary booth, took the viewer through all the action.