When Ken Clausen, a director of production for HBO Boxing, wanted to incorporate more aerial-camera coverage into the network’s productions, he knew he’d have to find a solution a bit outside the box. That’s when he discovered a system much smaller, sleeker and cost-effective than a full-blown SkyCam or Spidercam system that would be seen on the highest-level sports productions. He went with a relatively new, breakout system, Dynamicam. 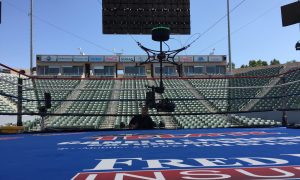 On September 9, HBO Boxing deployed the Dynamicam for the first time, for an HBO Boxing After Dark tripleheader headlined by a showdown between Srisaket Sor Rungvisai and Roman ‘Chocolatito’ Gonzalez at the StubHub Center in Carson, CA. The team plans to bring it back for a fight-night title match between Daniel Jacobs and Luis Arias on November 11.

“For quite some time now,” Clausen says, “I was having conversations with other vendors looking for a smaller, more inconspicuous four-point cable system that could live inside our lighting truss and fly over and just outside our ring. The concept was that it would give us more options than fixed, pan, tilt, zoom and provide more-dynamic shots that could at times come down as low as the boxers’ shoulder height.”

Dynamicam was provided to HBO Boxing by The Studio – B&H, which first showed off the system it had recently acquired at NAB 2017 in April. For its HBO Boxing debut last month, it was outfitted with a Blackmagic Micro Studio Camera 4K and an Olympus M.Zuiko digital ED 7-14mm lens.

“We hit all our marks,” notes Clausen. “This system is small enough to feel inconspicuous to the sport’s professional combatants, [who] are playing a dangerous game, and to surpass the arbiter’s safety guidelines. The gimbal was flawless, and the speed was impressive: four seconds to establish a shot on the other side of ring.”

The system took about eight hours to set up, but he believes that that had more to do with its being the first time his team had ever worked with the system. He expects it to take about half as long next time.