After a series of successes around the world, the HBS Broadcast Academy has opened its doors for the very first time in France, offering its flagship course in Live Sports Direction from 14-18 January 2019 in Boulogne Billancourt. 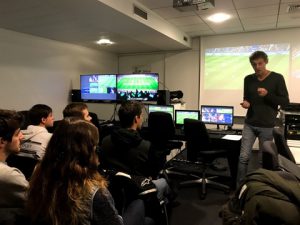 The maiden five day session is hosted in partnership with EVS. The course will be a mixture of theory and practical exercises using the Live TV Simulator based on EVS technology, which consists of two XT series production servers, one IP director and one Dyvi live production switcher. Different sporting events are loaded on to the simulator to create a live OB environment for the directors to practise their craft and skills.

Individuals with prior experience (minimum of one year,) will now be able to learn from the best sports directors in the world. The course will provide a unique opportunity for participants to develop their own unique style while learning about different cultural approaches to directing.

This opening session will be led by Laurent Lachand, a well-known sports director in France and Europe who is known for directing football at the highest level.

The programme is developed by the HBS Academy and utilises the experience and skills acquired by leading the host broadcast operations of major international events around the world.

Lise Cosimi, director, Broadcast Academy said: “With France being the centre of the sporting world over the next few years, it is time for us to create a cross-cultural learning platform for the local broadcast community. We aim to develop directors that are as comfortable working in France as they would be in Germany, England or the US. The focus is on the art of storytelling with the audience in mind.”