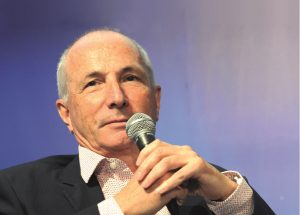 After more than 40 years in the broadcast industry and nearly 20 years as chief executive of Host Broadcast Services (HBS), Francis Tellier is to retire.

At the same time, Luc-Antoine Charial will become chief operating officer while Tellier himself will continue to serve as a special advisor to HBS and Infront and act as non-executive president of International Games Broadcast Services (IGBS), the production joint venture with IMG.

Tellier, now 65, said of his long-mooted retirement: “Since the inception of HBS, I have whole-heartedly devoted myself to the team and our clients. I have enjoyed our never-ending quest to deliver the best viewing experiences, from multiple digital feeds in 2002 to UHD/HDR in 2018, to audiences around the world.

“Every single event holds a special spot in my memory and now I look forward to experiencing these sports from the other side of the camera.”

Tellier founded HBS in 1999 as the exclusive host broadcaster for the 2002 FIFA World Cup.

“Regardless of event size, format, location or challenge, Francis is always the consummate professional: calm, composed and confident, while ensuring the broadcast success of the biggest sports shows on Earth” — Philippe Blatter

Prior to that, he served as managing director of TVRS98, host broadcaster of the 1998 FIFA World Cup.

During his tenure, Tellier helped HBS and IGBS win numerous awards and it is widely felt that he helped to elevate production standards for some of the world’s biggest sports events including six World Cups and five Asian Games.

He said: “Francis continuously pushed the boundaries of innovation, always meeting the high demands of our clients. Regardless of event size, format, location or challenge, Francis is always the consummate professional: calm, composed and confident, while ensuring the broadcast success of the biggest sports shows on Earth.”

Miodownik joined HBS in 2004. Charial has been with the company since 2000, overseeing all finance, human resources, IT and legal operations as HBS’ chief financial officer.

Based in Switzerland, HBS is a wholly-owned Infront group company. It acts as an independent host broadcaster working with sports federations, organising committees and rights holders worldwide to broadcast their events.

IGBS is host broadcaster for the 2019 rugby world cup in Japan.