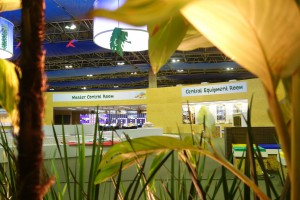 HBS operations around Brazil are moving briskly in advance of next week’s official kickoff of the 2014 FIFA World Cup on June 12. About two-thirds of the production personnel expected to be working at the IBC during the World Cup are currently on site and the rest are streaming into Brazil in the coming days.

“From a practical point of view the mood in the editorial side is good and people are pleasantly surprised,” says Dan Miodownik, HBS, director of production. “The PCR (Production Control Room), MCR (Master Control Room) and FIFA MAX server have all been put in place.”

Miodownik says the FIFA Max server is the heartbeat of the entire HBS operation and it will be up and fully open for business by June 4 when rights’ holders will be able to begin accessing feature stories that have been created by the HBS production team.

“The first key point is communication and the broadcast information platform as it will start to push out messages of the what, when, where, and how of content,” adds Miodownik. “The content will begin as a trickle and then become a stream, a river, and then a sea.”

Those initial features will give rights’ holders content related to the host cities with upwards of 50 city profiles available. ENG crews from the 12 cities that have a venue are submitting rushes and content that is then edited using Adobe Premiere.

“Our ENG centre has 41 different kits all ready to go and the first of the crews are coming in and generating content with the Panasonic cameras, Adobe editing, and file transfer platform,” explains Miodownik. “Then quickly, by June 9, we will have almost all of the team ENG crews operational.”

The move to Premiere is a change from previous World Cups where Apple Final Cut Pro was the editing system of choice.

“So far everyone is pleased with Premiere and super impressed with Adobe’s approach,” says Miodownik. “And four or five key senior editors are very happy. The last thing you want are users to be distracted or disappointed and so far the feedback is very good.”

The creation of feature stories is one thing but it is the coverage of the live matches that is obviously most important to football fans and rights’ holders around the globe. On Sunday afternoon there will be an important test match in Sao Paolo to make sure that every part of the HBS system from an operational, technical and editorial level is ready for the first real match on 12 June.

“It’s a rehearsal at a technical level and, to a lesser degree, the editorial as well,” says Miodownik.

That rehearsal will be done out of an HBS production cabin that is similar to the ones used in 2010 when the World Cup was held in South Africa and will feature more than 40 cameras. The cabins were shipped over from Europe via sea freight and the production kit, pulled together by Sony, is currently being installed at the venues.

“We can say that the decision to centrally equip cabins was the right one,” adds Miodownik.

From Miodownik’s perspective the most impressive accomplishment to date are the presentation studios that HBS has built on the Copacabana in Rio.

“They are astonishing considering their scale and location and they are also unbelievably impressive, and jaw-dropping,” he adds. “We are super-impressed with the way it translated from planning to reality.”

The World Cup is always a massive undertaking and this year’s is no exception as there are not only the efforts related to the main TV broadcast but also to the multimedia side. In 2010 HBS raised the bar for ‘second screen’ production with an operation that built highlights specifically for distribution to smartphones. That system is taking another massive leap in capabilities thanks to the EVS C-Cast system which will allow for fans to do things like choose alternate camera angles on key plays.

“We’re pleased with what we’re seeing but every second, minute, hour and day are critical to building confidence,” adds Miodownik.