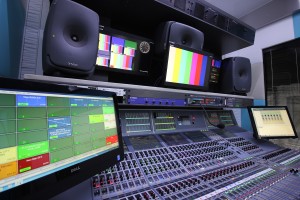 Inside ‘audio world’ at the new NEP Pacific OB truck.

As previously reported by SVG Europe, NEP recently launched the first of four new, similarly-equipped OB trucks set to debut between now and October (see coverage here). Pacific made its major event debut at the Wimbledon championships, and now HHB Communications has revealed details of its involvement in the project.

Neville Hooper, deputy head of sound, NEP UK, said: “We carried out some listening tests at HHB and settled on the 8351A SAM studio monitors. We felt they stood out head and shoulders above the Genelec 1030A studio monitors that we’d used before. Their manageable DSP means that we can deal with what can sometimes be a challenging acoustic environment using the GLM 2.0 software.”

A large amount of other equipment is also going into these trucks, including the Studio Technologies Model 41 Interface and Model 47A Interface.

Asked about the level of service with HHB, Hooper said: “The listening test helped us to sit down and work out what would work best for us moving forwards. It’s nice to have a relationship where you can work together to bring new products online.”