Startup sports streamer eyes surround and immersive for the future

Live and on-demand sports streaming service DAZN is out to make boxing both deeply engaging and a high point for online distribution. In the effort, the service is fielding an array of high-tech tools, including deploying both a JitaCam 360-degree jib camera and a DynamiCam three-axis cable-cam system at the Canelo Alvarez–Daniel Jacobs bout at T-Mobile Arena in Las Vegas last month. As for audio, DAZN is starting with the fundamentals of broadcast sound and looking toward the future.

“We’ve added a ton of cameras and a ton of technology, and that’s what’s going to set DAZN apart,” said Matt Miller, head of production, DAZN.

The IP-based network has similar aspirations for its sound, but, for the time being, it’s building on the basics for its forthcoming schedule of more than 100 nights’ worth of fight cards throughout the year.

“It’s a new platform for boxing and new territory for media, so the focus is on getting the sound right, making sure what we do is solid,” said Petro Mnych, technical operations manager, DAZN. “Boxing is a marquee sport in the US, and we’re getting used to what that audience wants. Then, we’ll be looking to push that.” 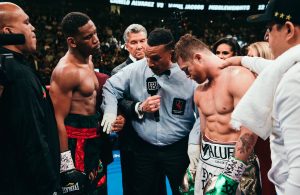 In particular, Mnych says, the network will be analysing how viewers are consuming the boxing shows. Online consumption allows for a much wider range of listening options, from laptop speakers to over-the-ears headphones to noise-cancelling earbuds. The range of reproduction quality is considerable, so the strategy is to move forward with boxing basics and evolve the sound over time.

The basics include wireless lav mics on the fighters’ cornermen and wired mics on the corners to pick up coaches’ calling out directions during the matches. Overhead, a 98 NTG1 condenser microphone is attached to the DynamiCam to catch ring effects.

The nature of boxing limits the number and placement of microphones during matches. For instance, said Mnych, movable microphones, such as parabolics, cannot be used on the sidelines because they can interfere with audience sightlines, and fishpole mics have a tendency to show up in the camera shots.

“A lot of the sound depends on having a great A1,” he said, noting that HBO Boxing veteran Randy Flick mixed the sound for the Canelo Alvarez–Daniel Jacobs bout and that Ryan Lewis mixed the match when DAZN streamed Anthony Joshua’s unsuccessful defence of his WBA Super, IBF, WBO, and IBO World titles against Andy Ruiz Jr at Madison Square Garden in New York on Saturday 1 June.

According to Mnych that show was DAZN’s largest audio deployment to date, with close to 30 microphones deployed around the venue, working from NEP SS17 and B unit and NEP SS11 for the Spanish-language stream.

DAZN’s audio is stereo for the time being. Mnych, a Londoner who began a broadcast career with BBC Radio and spent more than four years as head of production for Arsenal FC, says 5.1 surround and Dolby Atmos “are part of the conversation” for the future.

The concern, particularly with immersive-audio formats, is the amount of bandwidth they would consume of the streamcasts’ 45-MB encoded streams. But the ability of headphones and earbuds to re-create three-dimensional soundscapes makes multichannel audio a desirable goal, he contends.

Meanwhile, DAZN faces more-quotidian challenges. Mnych says microphone placement for boxing matches depends largely on local boxing regulations, which are set by state boxing commissions. As a result, how and how much sound is gathered for a particular bout will depend on the venue. For instance, for the upcoming MSG bout, placing a microphone under the mat to pick up foot movement is under consideration.

On the other hand, he says, boxing as a sport is about as basic as it gets: “You’d be amazed at how much of the production comes from just three cameras and about as many microphones. So it’s important to pick the right ones.”