On 12 August the world’s oldest motorsport venue, Shelsley Walsh Speed Hill Climb in Worcestershire, turned 113 years old, after the first event at the hill on 12 August 1905. To celebrate, an action-packed weekend was held, that included the UK public debut of the Panasonic Jaguar I-TYPE 2 Formula E car, with GP3 Champion and GP2 race winner Mitch Evans at the wheel. 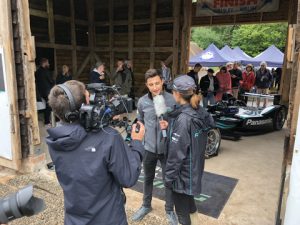 The Formula E car made the same attempt that countless other drivers have made over the last century; to be the fastest up the 1,000 yard, 1:6 gradient track. Evans set the record for the fastest time in an electric vehicle at Shelsley Walsh with a time of 30.46 seconds.

On Shelsley itself, Collier said: “The site is an absolute nightmare. It is in a valley, with no ADSL, one small spot of 4G, and one location on the hill where you can aim a dish and hit a satellite. Against those odds, when I did a review of the site, I still said to our client, GKN, that it would be great, and our truck did brilliantly.”

GKN Driveline, the 259 year old engineering group, bought the Panasonic Jaguar Racing ABB FIA Formula E Championship team’s car, the Jaguar I-TYPE 2, to the historic venue for its public UK debut. High Viz Media Group has worked with GKN, which was recently bought out by Melrose for £8 billion, for over seven years. 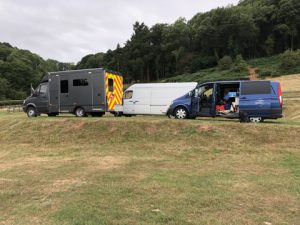 Collier, speaking to SVG Europe, explained how he ended up the owner of an ambulance: “I got a spam email in March this year for an NHS vehicle auction, and somehow, I bought an ambulance. All the other ambulances were going for £4,000 to £4,500, so I put a low bid in, got a call, and was told I’d got it.

“Compared to a standard long wheel base van, you get an extra foot in space in an ambulance and a lovely box with loads of windows and hatches cut in just where you need them.”

Collier added that the planning to design the truck was exploratory at first, as the van did not come with cable diagrams, but the team quickly realised that the ambulance, nicknamed OB999, could comfortably sit six people, comprising sound, video, production and director stations, with a seventh – a loggist using an installed 17 inch monitor — in the front passenger seat if required.

A Blackmagic Design production and routing infrastructure is housed in the new OB vehicle. An ATEM 2 M/E Advanced Panel sits at the heart of the vehicle’s production desk, where for the hill climb, the team produced a multicam mix for the event sponsor’s YouTube channel and for screens throughout the venue’s public and corporate areas.

In order to provide coverage at every stage of the hill climb, and deliver this through Shelsley Walsh’s various platforms, more than 7km of fibre cable was laid alongside the famous track, together with a multitude of fibre converters.

Routing is handled through a Smart Videohub 40×40, and this is complemented with a custom camera preview solution, which Collier built using Raspberry Pi and a Smart Videohub Cleanswitch 12×12. He explained: “As we often hire supplementary cameras for our large scale OB events, we wanted to have a solution that would allow our rack engineer to recall the camera on preview.  So, alongside Blackmagic’s open SDK, we wrote a piece of code for the Raspberry Pi, so that when the engineer hits the paddle, the Smart Videohub Cleanswitch delivers the required camera feed to their screen.”

Collier added: “I’ve been an advocate for Blackmagic Design in broadcasting since I first bought an original ATEM Television Studio. I just couldn’t believe what the kit could do, how versatile it was, at that price point. And whilst the products have developed hugely since then, that ethos hasn’t changed. Also, it’s imperative that we’re able to react to changes in schedules in real time, so the low latency that Blackmagic Design kit delivers means that we can immediately show the viewers the best possible view of the action.” 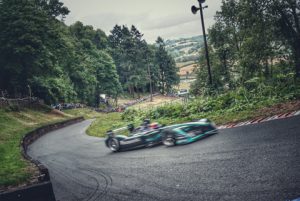 Collier continued on the use of the ambulance: “It’s designed around the idea that in London we’re running out of space, and although I know people want these great big OBs, this one is ultra-compact and incredibly agile. It was just brilliant last weekend. We have built this truck to be capable of a 4K workflow and to have IP capability, and we’re now booking it into its next jobs, and have a pre-booking for it for the Geneva Motorshow next year.”

He concluded: “I might get a fire engine next!”