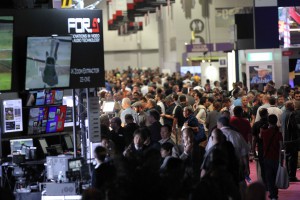 Many of the key demos at NAB were all about higher dynamic range (HDR), wider colour gamut, peak brightness, the improved blacks and shadow detail graders have been waiting for, and impressive Nit counts. The industry doffed its hat to Dolby Vision (12-bits of image rendering), the Canon engineering demo of a 2000 Nits reference display, the Sony BVM-X300 4K OLED reference monitor (1000 Nits), and Quantel’s 4K and 8K demos of HDR.

The bulk of this momentum was about filling out UHDTV with the wow factors to follow higher resolution, but Ericsson in particular showed the impressive broadcast potential of 1080p 60 10-bit with HDR.

Behind the scenes at the level of ITU standards setting, BBC R&D, Philips, Technicolor, NHK, and Dolby are key players on the ITU-R RG 24 group chaired by the BBC’s Andy Quested. He said: “Work is progressing and we hope to have a favourable report in July.”

David Wood, chair of ITU-R Study Group 6 added: “The HDR issue is currently complex and difficult. There are broadcasters such as the BBC and NHK who believe that the Dolby system would be good for non real-time environments but operationally inconvenient for real-time environments. On the other hand there are other broadcasters who see fewer operational problems with using the Dolby system in real-time. In terms of standards setting, at the moment all eyes are turned to ITU-R group RG 24.”

Arri started showing the values of HDR at NAB 13. This time it continued to use HDR displays to show the 14+ stops of real dynamic range captured by its cameras.

“We used the new Samsung 4K SUHD JS9500 consumer TV set, and with the help of Samsung we calibrated it for a peak white of 1000 Nits compared to its normal 400 Nits consumer level, said CTO Glen Kennel. “We graded a variety of content from ALEXA, ALEXA 65 and AMIRA cameras, converting it all to 4K UHD and grading the pictures to take advantage of the extended highlights.”

“In the past we used the Dolby PRM 650 reference monitor at 600 Nits. This time it was a consumer TV, so yes, I would say that HDR is getting closer to practical adoption,” said Kennel. “While HDR looks good with (2K) HD pictures too, the consensus in the US market is that HDR is a key selling point for UHD, and that the work to develop delivery standards and to master content for HDR, will not be done with HD, but rather applied to (4K) UHD.”

BBC R&D has also been working with the same Samsung 800 Nit display. One of the big industry players, the UHD Alliance, was established in January to enable a consensus position on UHDTV between content providers, TV manufacturers, and content delivery companies like Netflix and DirecTV; the group definition of UHD includes high dynamic range, wide color gamut, high frame rate, and advanced audio.

Quantel Snell’s Damon Hawkins, product manager for editing, colour and finishing, agreed that wide gamut and brightness is the way to go. “The general feeling from broadcasters was that 4K/UHD was not enough of a win over HD by itself. We need that extra oomph that wide gamut/HDR provides. 4K HFR is still important for fluidity on screen, especially with sports and moving up to 8K, but you can do that with HDR too, just as we showed at NAB,” he said.

“There still is lots of discussion about where we are going with monitors. The Canon 2000 nits one looked incredible – like looking out a window,” he added. “The challenge is how do you make your deliverable. It’s very hard to make an HDR master in one colour space and automatically have it squeeze into an SDR (smaller) colour space without having to do an entire trim pass (re-grade) for a different display. We will be there with Pablo Rio — come IBC — with lots of wide gamut and the storing of native colour spaces on disk, but the issue will be how do you make your HDR documentary or movie look OK on a normal monitor without having to do lots of work?”

While Hawkins worries about having to do separate colour space masters, Mark Horton, Ericsson’s strategic product manager, TV compression, had his own views on HDR as the next frontier for 4K. At NAB he masterminded the very alluring 1080p 60 10-bit HDR technology exhibit.

“UHDTV up to now has appeared to promise to deliver the rich, lifelike game viewing experience that sports fans crave. But making 4K TV a success with consumers isn’t just about resolution size or application. It’s about combining features such as high dynamic range, high frame rate, and wide colour gamut to contribute to a heightened viewing experience,” he said.

“The industry has set out a phased commercial approach to enhancing TV services beyond HD. Empirical tests however have given rise to skepticism about UHD-1 as just increasing resolution to 4K has limited or no consumer appeal over HD at current viewing distances and screen sizes. In light of this, we’ve seen UHD-1 Phase 2 receive increased attention, thanks to its additional enhancements such as HDR, WCG and 10-bit,” he added.

The frontrunner for next generation 4K TV enhancements is HDR, but it would enable both 4K and HD to display a much wider range of the visual content that the human eye can perceive. And HDR is applicable to any screen size and viewing distance.

“It works with an expanded luminance range that delivers more information in shadows, mid tones and highlights, revealing more detail in the image and also giving the overall scene more punch,” said Horton. “Since consumer tests have shown HDR is effective on current HD services without the need to increase resolution, it may offer major costs savings on production, infrastructure and delivery, for those who choose not to implement 4K, especially if combined with WCG and 10-bit.

“Modern digital cameras can capture a much wider dynamic range than is used in TV transmissions,” he added. “If we can use this wider range and encode it, it is technically possible to build a new generation of televisions and other display devices with higher light output and reduced light leakage, which stand to offer a better viewing experience.”

Simon Fell, the EBU’s director of technology and innovation, started at the ITU, and progressed to the problems. He cited the BBC collaboration with NHK on HDR as particularly interesting, in part because it has backwards compatibility in its DNA.

“There are four or five different solutions pitched for HDR and the debate is over which system will win, or which systems will be incorporated in the standard,” he said. “The problem at the moment is that all the HDR demos and people pushing what’s possible on a domestic display is fine for demonstrating the qualities of HDR, but the workflow is not an end to end practical working environment.

“The interoperability across the workflow and that tracking of what HDR is at the source all the way through to the delivery to the display is the key thing to get right,” he added.”

NAB also saw a major focus on another aspect of the subsequent phases of UHD – immersive audio. The players for ITU recognition include Dolby with AC-4, MPEG-H, the DTS system and NHK’s 22.2 discreet channels. The contenders for adoption by the ATSC for version 3.0 are Dolby AC-4 and MPEG-H.

“I believe the ITU has come to an agreement where it can support all the different technologies. It is trying to include everything from NHK to the scene-based and object-based,” said Fell.

He acknowledges we exist in a moment of time when a de facto standard might beat the ITU agreed standard route, and there is a reason. “The set vendors are pushing very hard for something to put on their 4K displays. Consumers are not as badly off as they were with 3D in that these displays offer a fantastic image from your stills or camcorder. Consumers are getting some benefit in terms of resolution and HD looks very good anyway because the up-scaling is good,” he said.

“The full UHDTV 2 specification that we are all working towards has a dilemma about it because the screen vendors want to know when services will begin so they can build in the right facilities,” he added. “This costs them money through higher processing speeds and more memory. No manufacturer is going to tell you precisely what they can and cannot support because that is secret to them.”

On the issue of the 1080p 60 demo run by Ericsson, Fell said: “This moves towards 1080p 50 with HDR and with enhanced audio. There is nothing to stop you adding immersive audio to 1080p 50, and nothing stopping you from putting HDR on a 10-bit path. You are not going to get a 12-bit path easily.”

The advantages are no massive change because modern cameras capture the HDR levels required. Broadcasters could get a better product whether they use immersive audio or not, but would this push back the development of UHD?

Despite other problems like avoiding simulcasting, Fell says the EBU believes the up coming standard should support HD with high dynamic range. “People should have the option of doing this because technically is it possible,” he said.

Set vendors will very soon only make 4K screens with more than the resolution improvement. “The broadcaster could potentially have the choice to up-scale 1080p 50 with HDR to 4K screens, which will look very good,” said Fell. “But if it is that good some people may never bother doing UHDTV because of the costs.”

The truth though is that many companies are looking at launching UHDTV channels, and when one comes the competition factor will kick in. All the talk at NAB of HDR and immersive audio meant HFR and bit rates were nudged aside.

“A 12-bit signal requires a lot more encoding power, so where a 10-bit signal gives you 1024, 12-bit gives you 4096 and a 4,000:1 contrast ratio,” said Fell. “That’s a simplistic way of looking at it but it boils down to some people who say we do not need any more than 10-bit. But when you want to make the pictures brighter this brings with it energy issues in terms of the display. The Dolby Vision display already has a cooling system.

“That’s an issue with the overhead; 10-bit is probably doable but a 12-bit overhead will suddenly give you a headache. We don’t know yet what compression will do with this.” He added.

We have to see if we get a linear effect or some strange artefact, but we can expect it will be the same as with any other image. “Bit rates are not such a problem to satellite companies. It is not a problem if you are delivering one program to one person on the Internet as Netflix might do,” said Fell. “But if you start delivering to millions of homes bit rate will be a problem. And also the sustained bit rate to deliver a UHD program. You need a pretty good broadband connection for a continuous piece over a period of time.

“It’s funny, because the rate of progress does not seem to be what we would all expect. Marshalling the forces of the ITU to get a standard through can be frustrating.”