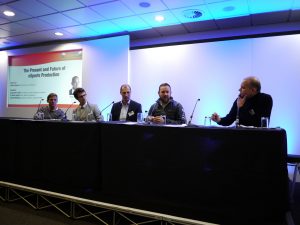 E-sports is a contentious area in both the worlds of sport and broadcast, and at SVG Europe’s Future Sport event at the Kia Oval, the final panel of the day, Present and Future of E-Sports Production, moderated by SVG contributor Neal Romanek, did not disappoint.

This genre of sport has a huge global following, and it is mostly experienced virtually. The snappily named James Dean, managing director at e-sports company ESL stated that in the early days of his company, ESL began trying to create content, but with the growth of broadband it soon discovered the benefits of being a major distributor of content instead. “We tried to create content, but it was distribution that worked; it coincided with the growth of broadband. As a result, we see 15% growth year on year.”

He said that when e-sports began to gain traction, viewers began tuning in for the actual gameplay. Dean added: “But as the market matured, the narrative around the player and the gameplay is growing.”

Telling that story involves a lot of data. Alexander Prustel, head of special projects at TV Skyline, service provider for TV and broadcasting, noted that while “e-sports production is similar to normal sports production, the players don’t sweat!” E-sports is driving technological experimentation and change due to the unusual nature of the game. “E-sports is a technical driver. What we do today, the old sports will do in five year’s time, I’m pretty sure.”

Speaking of a typical set up for an e-sports event, Prustel stated that there are normally around 40 cameras, full remote control, detailed graphics on gameplay and the players themselves, and a viewership of 100 million to 120 million people. Dean added that there are also observers floating around venues, providing even more data.

Technically, the companies that put on these events are demanding, Prustel added: “The last sentence is, ‘I need to do this and I need it in five day’s time’. That’s how it works in e-sports.”

Augmented reality (AR) and virtual reality (VR) are making a big impact in the world of e-sports according to the panellists. In a game final, the players are bought to a stadium where 100,000 people can observe the event, noted Dean; however, they spend much of their time not looking at the players themselves, but at giant screens in the venue, seeing what the players are seeing, and AR-based extras, such as giant fire-breathing dragons flying around in the stadium.

Samual Westberg, director of sales EMEA at LiveLike, a provider of a live streaming platform for VR, commented on the technology: “We really consider VR as a content aggregator, taking a lot of content and making it accessible to a lot of people, and that’s what Millennials are looking for. So we bring 40 cameras into the experience, all those overlays and graphics; you can have all that content available in one single platform so the viewer can choose what they want to see at any point in that event. The young generation wants to be able to decide what their own content is. VR means you can choose what your experience is.”

Dean added: “One of the trickiest things is working out how that 360 degree experience translates into a live game experience. We have several thousand early adopters watching on 360 degrees now.”

E-sports unusual requirements for coverage mean that rather than taking products off the shelf, companies such as ESL have had to partner with broadcast technology companies to adapt kit for the sport’s needs. Vizrt is working on the graphics side of e-sports, explained Dr Remo Ziegler, head of research at Vizrt, provider of real time 3D graphics, studio automation, sports analysis and asset management tools, enriching the narrative for viewers.

Ziegler commented on the huge amounts of data generated by the e-sport genre: “Working in the s-sports industry is very interesting for us. We’re working in graphics. But the companies we’re working with in e-sports want to see more data. They want to know what makes the difference [between one player and another]? What makes one player better than another one? What makes a team better than another one? This is what we try to build into the story to tell people what’s going on.”

Ziegler added that this data analysis helps viewers not only build back stories for the players, but also helps highlight main action during these complex games played by a multitude of individuals competing in a virtual world. “There are so many things going on at the same time, so how do you know what’s the key action? That’s why the story telling is becoming so important.”

One key point the panellists drew attention to was that e-sports is something of a wild west in its approach to broadcast, with no regard for traditional ways of doing things. Westberg commented: “E-sports guys have no idea of broadcast. They will use a skycam with AR technology, and I think the football guys [for instance] should do this too.”