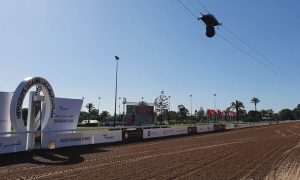 XD Motion’s X fly 1D over the track for the Morocco President’s Grand Prix, at the Meeting International du Maroc 2019

With some of the best warm bloods and Arab horses in Morocco competing, the Meeting International du Maroc 2019 for the Moroccan President, Mohammed VI’s, Grand Prix, was given the XD Motion treatment with a cablecam that flew over the heads of horses and riders.

Paris-based aerial filming specialist, XD Motion, completed the prestigious job over the weekend of 16-17 November at the Hippodrome Casa-Anfa in Casablanca. The company set up its X fly 1D over the track for the Morocco President’s Grand Prix.

Filming was over the last turn and up to the finishing line for live broadcast feeds, along a point to point distance of 350 meters. The camera hit a ground speed of 70km per hour. It ran over the middle of the track only five meters above the horses and the heads of the jockeys. 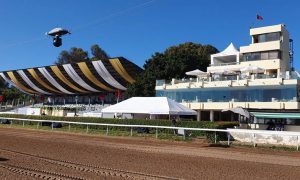 Benoit Dentan, CEO at XD Motion, commented on the set up: “We were specifically sought out to install this specific high speed cablecam as the client knew we would give a great view as close as possible to the race.

“This is the second year that we have worked at this event, and to achieve better shots, closer and from front, back and side views is something that the client was very impressed with,” he added.

Dentan continued: “Our low cost model was something they enjoyed too as we installed the whole rig in one day and managed to derig in just five hours.”

This type of set up is something that XD Motion specialises in, with its light and low cost RF attachment solution. The entire job was achieved with only four members of technical crew.