In January 2016, it was announced that ITV had secured the rights to show nearly 100 days of horse racing each year in the UK. The contract, which started on 1 January 2017 and runs until December 2020, sees all the main meetings, such as the 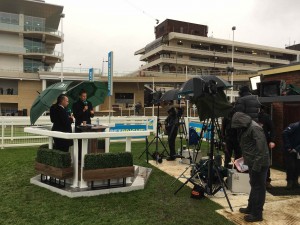 In all, a total of 41 fixtures will be shown on that channel in 2017, while a further 60 will be broadcast on ITV4. A magazine preview programme is also transmitted each Saturday morning on ITV4. The coverage marks racing’s return to ITV for the first time in 32 years.

Presenter Ed Chamberlin introduced the New Year’s Day meeting from Cheltenham, while expert analysis and comment came from Sir Anthony McCoy, Luke Harvey and Mick Fitzgerald, with contributions from Olympic gold medallist, Victoria Pendleton and weather expert, Lucy Verasamy, and commentary from Richard Hoiles. Oli Bell was at the Scottish Musselburgh course for the second meeting of the day.

“In being awarded this contract, our aim is to bring horse racing to a broader audience,” said Roger Pearce, Technical Director for ITV Sport. “And that means the production team will explain the intricacies of the sport, as well as bring the action in a exciting and dynamic way. The previous incumbents did a great job but our intention is to shape our coverage in a way that creates as wide an appeal as possible while still satisfying the sport’s core audience.”

Pearce says that the coverage at Cheltenham was a fantastic start, but it will evolve and further innovations will appear as the contract advances.

Leading the production team is BAFTA-award winner Paul McNamara. “He also is our executive producer and senior director and represents very much the ITV Sport creative vision,” declared Pearce. “He has put together an editorial and production team that ensures the viewers will benefit from that vision.”

Alongside McNamara will be a producer for the race coverage and another for the morning magazine show. In addition, two other producers will be responsible for creating feature material.

From a technical perspective, ITV Sport will utilise the existing BT fibre connections available at most courses. But a new contract with BT that starts in July will see increased connectivity, including IP capabilities. “We also have BT SNG trucks at every venue as part of our delivery commitments to ensure we have diverse back up. On top of that, we are also looking at low bit rates and internet back up — but we are not there yet.”

OB facilities for the contract are provided by NEP Visions. Just one scanner is used for both race coverage and presentation, although there may be times when a second vehicle is needed. “When we first looked at the requirement our initial thoughts were to handle it like football where there is a world feed, and then an add-on for presentation,” explained Pearce. “But the production team felt it would be better for the overall programme if everything came out of one truck. At Cheltenham, we did cut a world feed on a router, with separate graphics being fired simultaneously.”

MOOV, ChyronHego and Piranha Graphics in the frame

Those graphics are being provided by MOOV with a dedicated graphics solution employing some of the latest systems from ChyronHego. “Our first challenge was to provide a bespoke graphics vehicle,” said MOOV’s managing director, Duncan Foot. “Our solution was to kit out a bespoke Mercedes Sprinter van with two dual-channel ChyronHego Mosaics, several PCs for data handling and graphics control software. The vehicle had to be remodelled to fit in four members of staff and monitoring of multiple sources. The vehicle was designed and fitted out by our newly created in-house special projects team.” 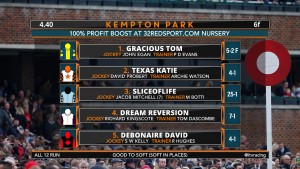 New graphics have been designed for the ITV contract

across the country, using multiple cameras and video sources. “We selected the ChyronHego Virtual Placement (VP) system with two camera inputs — one of which is switchable from a router panel, a virtual video wall and associated input and also a fill and key direct from a graphics source allowing us to place conventional graphics in the virtual world.”

The VP system is set up with standard scene tracking as well as Anchor Tracking, allowing operators to accurately position the furlong markers and finish line on the wide-angle finish camera without the need for expensive hardware add-ons.

“We chose ChyronHego Paint to be used to telestrate on the action, transferring clips across the EVS network for improved workflows. Racing Client data software from Piranha Graphics completes the graphics solution,” said Foot.

He continued, “As well as the high-level of technology and innovation in-use, the project leans heavily on our very experienced graphics operators who have been working on horse racing for several years and know the sport to a very high level.”

The on-screen graphics have been designed by Alex Dinnin at ITV Sport and then implemented by MOOV’s in-house graphics build team headed by Laurie Beamont.

For the initial Cheltenham meeting 38 cameras were used, a mixture of fixed, hoist, Steadicams and specialist units. ITV Sport has appointed Aerial Camera Systems (ACS) to provide specialist camera installations at each of the race meetings covered by the broadcaster. “We’re delighted to have been asked to supply a range of facilities to enhance the coverage,” said Matt Coyde, sales director at ACS. “In the coming months, we will be working on a number of projects which will bring even better viewing experiences for the ITV Racing audience.” 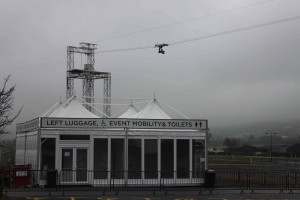 One of the innovations introduced at the Cheltenham meeting was use of a wire cam covering the parade ring and shots of the grandstand. “This comprised of a point to point wire system and stabilised head with a Sony P1 camera and wide angle lens running between a temporary tower in the car park where it was operated, up to a mounting point on the old grandstand,” explained Coyde. “This is in addition to our unique self-built Tracker vehicles that provide spectacular moving shots from the side of the race course. For the Cheltenham meeting, we used two such vehicles.”

Mounted on the main vehicle, which is a modified 4×4 Land Rover is a Nettman Systems stabilised mount housing a Sony 950 camera with a Fujinon 42x lens and block. The remainder of the camera assembly is located within the vehicle itself. Control of the camera and stabilised mount is handled by the operator working in a specially adapted racing seat in the back of the vehicle.

“In addition to the remote controls for the normal pan, tilt, zoom and focus functions, there is a roll control to allow the shots to remain parallel to the horizon — even when the vehicle is travelling across uneven terrain,” said Coyde.

The second Tracker operates in a similar way, but uses a Sony P1 camera and Fujinon 42x lens 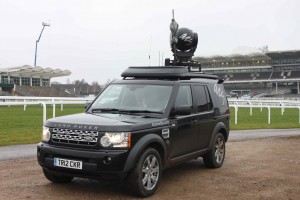 integrated into a Shotover F1 Stabilised Mount. ACS also rigged one of its unique remote SMARThead units fitted with a Sony camera to provide remarkable shots of the horses jumping at one of the fences on the home stretch. This was powered locally off an ACS battery system with a fibre optic link back to the OB where the operator was situated.

Signals from the Tracker Cameras, SMARThead and Wirecam were sent back to the scanner using radio links supplied by Broadcast RF.

“Having that wire cam proved to be a real bonus from the presentation side of things,” stated Pearce. “That’s a facility we will certainly want to use at the major meetings throughout the year. And we will utilise UAVs (Unmanned Aerial Vehicles), too. We have to be very careful about their use close to horses and have been working with the Jockey Club to ensure it is happy with our proposals. Those cameras certainly add to the atmosphere of the event.”

Among the crowds: New NEP truck on the way

Presentation for the Cheltenham meeting came from trackside and this, too, is intended to add to the ambience of the racing. “There may be some meetings where a portable studio will be used, but we feel the presenters and pundits need to be in the midst of the action — and to be seen by the racegoers.” 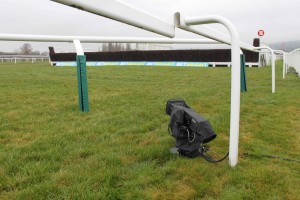 That exterior location means that there is a move away from technology such as touchscreens for use by the presenters. “That is quite deliberate, for it is the human side of the story we want to deliver. That’s not to say we won’t ever utilise such technology, but it will be only be used where it enhances the viewing experience.”

As part of the contract, NEP Visions is building a new truck due to be completed in April. “It will be much bigger than the existing dedicated unit, and provide a much better working environment for the production team,” said Pearce.

“NEP’s attitude is ‘we want to make this better for you’. And that sums up ITV Sport’s attitude towards the racing contract, too. We want to make the viewing experience better, both for those who are ardent horse racing followers, but also those who want to know more about the sport and simply enjoy the programmes.”