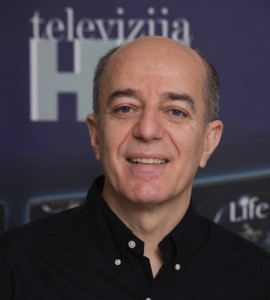 “We deserved this,” said captain Darijo Srna after his Croatia side booked their FIFA World Cup place for the Brazilian tournament. Although the side failed to qualify for the last World Cup, the team competed in three consecutive World Cup finals between 1998 and 2006. So coverage of the national team’s matches is already a well-rehearsed project.

Heading up the coverage for HRT (Hrvatska Radiotelevizija, the Croatian public service broadcaster) is Drago Ćosić – a reporter with more than 3 decades of experience covering major sporting events. “Our planning started in February and has progressed very well. It is important that we get it right – we play the hosts, Brazil, in the very first match of the tournament.”

Ćosić explains that HRT’s analysts will be based in the channel’s main broadcasting centre in Zagreb. “Although we will not be utilising a studio in Brazil, we will install a permanent link to the Croatian national football team camp. In that way, we will be able to relay breaking news to our loyal football fans in Croatia.”

Even with the presenters stationed in the Zagreb studio, HRT will still need a team of 24 on locations to ensure those fans are well served with news and updates. “Twenty of those in Brazil will form the television crew, while the remainder will cover radio operations.”

Igor Medic, deputy spokesperson for HRT, provides more insight. “Although we will not have the facility to enhance the live world feed with our own cameras during the matches, we will make use of two ENGs for the games involving the Croatian team. Our plans call for one camera high in the stadium, while the other will capture interviews in the areas around the changing rooms.”

The world feed and the output from the two ENG cameras will be mixed in an OB truck at the various stadia. Transmissions back in Croatia will be available in both HD and SD.

“We will make full use of all the feeds offered by the host broadcaster to provide the most comprehensive coverage for our viewers,” states Medic. “Editing on site will be carried out using Avid Composer.”

He goes on to report that there are no plans for web streaming of the tournament back to Croatia. “However, video clips and related stories will be quickly uploaded to our website, enabling fans in Croatia to stay updated on all that is happening at the tournament.”

On 1 June HRT launched its second channel. Although this will normally broadcast in SD, it will be used for HD transmissions for the World Cup. “Basically, we will have two second channels – on in SD and the other, experimental, in HD. The content of both those channels will be the same, the only difference being the resolution,” states Medic.

In common with other European broadcasters, HRT is faced with the multiple challenges of distance, links and the significant difference in time zones. “These are challenges to be overcome – and we will plan to show the great results that will be achieved by our national team!”