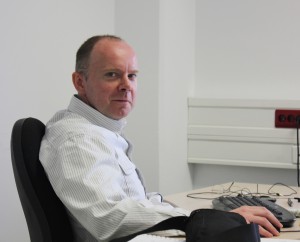 Following disturbances during its match against Norway in March, UEFA ordered Croatia to play its next home Euro 2016 qualifier on 12 June behind closed doors. As a consequence, fans from both nations will have to follow the game on television or on the large video walls that are to be erected no closer than 2 kilometres from the Poljud stadium in the town of Split – just over 400 kilometres south of the capital, Zagreb.

Covering the game will be Croatian public service broadcaster HRT. “The stadium in Split is not one that is permanently cabled for television use, so we will arrive the day before the match in order to rig,” explains Igor Medić from the broadcaster’s public relations department. “We will be using our own outside broadcast unit and deploying a total of 17 cameras for coverage. Twelve will be used for the world feed, while five are for our domestic coverage. One of the twelve will be on a crane and one will be capable of Hi-Motion.”

Medić goes on to say that, unlike some competitions, camera positions for such games are not planned by the football authority but by the director – in this case, Ranko Varlaj. “He has the discretion to place the cameras where he thinks we can obtain the best coverage. Of course, with no crowd, there will be no opportunity of reactions from the fans – but it is the game that is of importance.”

Varlaj will not be carrying out his own vision mixing on this crucial game. “Our OB unit is equipped with a Kahuna 2.5 ME switcher, and for audio there is a Calrec console,” says Medić.

He continues: “We will be providing a clean world feed to UEFA, who will be responsible for supplying the various rights’ holders. And, of course, we are also offering assistance to our colleagues from Italian television.”

Like many directors covering football games, Varlaj will be responsible for cueing the officials and teams to leave the players’ tunnel and move on to the pitch.

Replays will come from the three EVS units deployed in the HRT truck. These will be under the control of a dedicated replay editor.

“We have several producers assigned to the match working under executive producer, Saša Mlađenović. Although he will look after the game itself, there are others who compile analysis packages and material to go into and out of breaks.”

Medić says that HRT will have presentation studios both at the stadium and at its Zagreb transmission centre. The facility at the venue will be under the control of match director, Varlaj.

Graphics for the match will come from Zagreb-based RoBaGo. “They will also be responsible for match data such as individual player 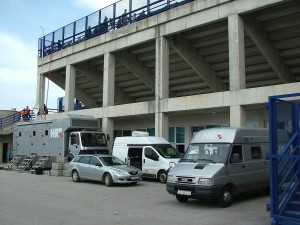 statistics, shots on target, shots off target, assists, offsides, fouls committed, fouls suffered, passes, completed passes and so on,” explains Medić. “And they will provide us with statistics and facts that assist our commentators and presenters.”

Goran Omrcen-Ceko, chief technology officer for RoBaGo, adds: “We are using our own software solution that we customise for each sport based on production requirements. Our software runs on the same hardware platform used by other major software vendors. For example, for HD/SD SDI I/O we are using Matrox DSX OEM boards.”

Omrcen-Ceko says that for the Croatia versus Italy match the company is bound by strict UEFA requirements both in terms of visual design and scope of data information. “This year we have already covered home Euro 2016 qualifying matches involving Croatia and have sent operators to Macedonia, Montenegro and Romania to provide graphics for some of their European Qualifiers.”

Medić continues: “HRT has invested heavily in its modernisation programme during the past two years, and will continue that process. Our aim is to be technologically advanced and fully digitalised in the near future, so we can deliver the very best performance and top quality pictures of high profile events, such as this football international, for our viewers.

“The atmosphere will be strange for the noise from the crowds are all part of brilliant television coverage. The team will miss that support, for this is an important match for us. Obviously, we hope that Croatia would win and qualify for the Euro 2016.”