The NEP Visions building in Bracknell west of London has collapsed after a fire broke out overnight. Eyewitnesses reported hearing a number of explosions ripping through the area. “It’s ultimately an awful event but fortunately no one was hurt,” says Kevin Rabbitt, NEP President and CEO. “And we will be fine in the short, medium, and long term.” 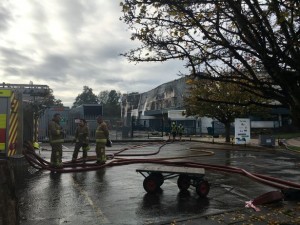 A fire at NEP’s UK warehouse broke out overnight. No one was injured and the cause is unknown.

Brian Clark, NEP Visions Commerical and Technical Projects Director told SVG Europe, “we’ve lost trucks but no people and that’s the main thing. We have no idea what caused the fire and cannot even speculate at this time.”

Clark says the NEP team managed to recover quite a few trucks that were parked outside the main garage that was destroyed. Approximately 75 NEP employees work in the building and the near-term plan is to shift operations to NEP’s OBS facility in Slough. The IT systems have also moved to back up servers to ensure that there is no disruption in terms of client servicing.

“We’ve been able to recover to some extent and get staff back in contact with clients this morning,” adds Clark.

Rabbitt says that Steve Jenkins, president of NEP UK and Ireland, and his team will be focused on the client and employee side of returning to normal while Keith Andrews, NEP, COO, is focused on the medium and long-term needs like finding new office space and figuring out equipment replacement plans.

“We are incredibly appreciative of all the calls of support we’ve had from the OB area and the industry,” says Clark. “We are overwhelmed by the level of support and all the calls from colleagues. I can’t reiterate how thankful we are. We are obviously in shock but we’re trying to be ‘business as usual’ as much as we can and putting in place immediate plans to ensure clients and contracts are looked after.” 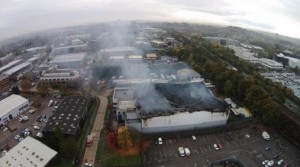 A drone captured this image of the NEP warehouse that was destroyed last night.

Rabbitt echoes Clark’s thoughts as to the supportive reaction not only from other NEP offices across Europe and beyond but also equipment suppliers and even competitors.

“In my four years here there has always been instant support and we have heard from just about everyone you can think of,” says Rabbitt. “It’s a friendly competition with our competitors as we are all generally pretty close and then our traditional partners like VER and Bexel have been great reaching out to us. Even on the display side our competitor CT Group was willing to help out.”

Firefighters spent much of the night tackling the fire at the Western Industrial Estate in Bracknell, shortly after 22:00 GMT on Tuesday. They brought in 10 fire engines and an aerial platform to deal with the blaze which continued into Wednesday morning. At least six people were in the building but managed to escape without injury, local media reported.

The initial explosions from the fire could be heard around Bracknell, with people taking to social media to share photos and see what was happening. Jess Hunt wrote on Twitter, “Thought someone was letting off fireworks till I saw the smoke outside. Bracknell literally on fire!!”

NEP Visions Worldwide is an international media and broadcasting company, with bases in the United States, UK, Ireland, the Netherlands, Sweden, Norway, Denmark, Germany, Finland, Switzerland, Belgium, the United Arab Emirates and Australia. It has been operating for 30 years, working on events including the 2011 Royal wedding, Wimbledon, major concerts and Champions League football.

Drone footage shows the devastating extent of the blaze: https://www.youtube.com/watch?v=mSTgDGHwCOk