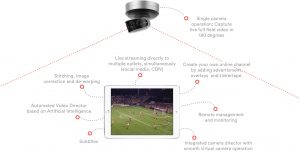 NewsPilot can be used in studio environments or in the field to completely automate news production without the need for camera crew or a director. For example, smaller broadcasters or independent reporters and producers could use NewsPilot for live field news and event reporting, or in-studio news and interview production.

IQ Sports Producer is an all-in-one production suite which can be used to produce and stream sports events from any location. It removes the requirement to install expensive camera and production facilities at sports grounds, and like NewsPilot, does not need dedicated camera crew or a director to operate. It is targeted at smaller and lower league sports clubs and teams who receive little regular TV coverage which might otherwise contribute important revenue opportunities, for example from fan and member subscriptions and local advertisers.

The main elements of IQ Sports Producer are a fixed-position 24MP 180° camera that can cover an entire field of play, a dedicated appliance with Mobile Viewpoint’s AI engine and IQ Sport Producer Software, and connection to the LinkMatrix management dashboard (see above). Mobile Viewpoint’s AI engine selects which of the camera’s four 6MP lenses to use given the position of play during a match or game. The AI engine, originally used in the defence industry to track missiles, evolved first as a means to capture sport training sessions and is now used to track players, balls or other objects during a live match or game.