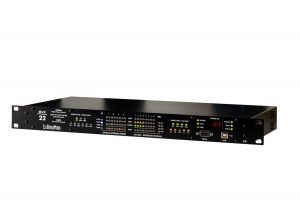 BroaMan director Florian Myrus took time out at IBC 2018 to highlight several of the fibre network specialist’s latest initiatives, including the extension of the Mux22 series of devices. Muxx22-FrameSync8 is a universal interface and has been designed to provide a “more elegant” alternative to traditional frame sync technologies.

Each standard Mux22 can now contain a FrameSync board which allows Video Frame Sync of eight Video Inputs (eg. for cameras). The new FrameSync option is based on the new FrameSync8 board, which provides eight Sync Outputs in addition to the existing two VSync (Video Sync Board) I/O option.

“The phase shift and format of Video Sync are precisely matched to all eight outputs, with no mismatch in timing,” said Myrus, adding that Mux22-FrameSync8 has begun shipping right away.

The Repeat48 at one end is configured with 8-In, 4-Out, and on the other end 4-In, 8-Out — and each device pair is connected via just one duplex single-mode cable. “This is now used to broadcast ACB Spanish National Basketball League; it was for this that we principally needed the solution,” said Rojo.

Other recent developments include the appointment of Clear-Com as its new distributor in the USA. BroaMan solutions expected to resonate strongly with this market include the MUX-22 and Repeat8-NANO Series interfaces; palm-size 3G-SDI or AES10-MADI signal media converters; the larger capacity Repeat48 media converters; and the Route66 3G-SDI 40 x 40 non-blocking video matrix.

Remarking that footfall had been good throughout the show, Myrus added that IBC 2018 had “proven to be another great chapter for BroaMan as more and more people become aware of the benefits” of its fibre network technology.