At IBC SVG Europe sat down with Dolby senior product marketing manager Rob France to discuss the growing impact of Atmos and Vision in both content creation and consumer delivery spaces.

At the show Dolby announced that the 2018 Super Penguin Ultimate Game, which took place during the show on 15 September, was streamed live in Dolby Vision HDR via Tencent Video and was accessible to Tencent video Super VIP users in China with Dolby Vision-enabled TVs.

This made Tencent Video the world’s first OTT content service provider to deliver a Dolby Vision experience. Dolby claims that Vision can deliver colours never seen before on a screen, greater contrast, highlights that are up to 40 times brighter, and blacks that are 10 times darker.

“We’re focusing on both Dolby Vision and Dolby Atmos at the show,” Rob France told SVG Europe. “And I think the key thing to highlight really is the general momentum with both of those formats. 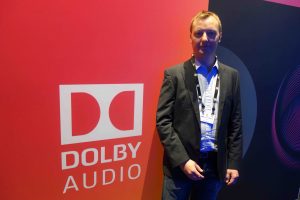 “On the Atmos there has been great progress made from where we were 18 months ago when BT launched the first services. Now of course Sky Sports are also delivering all of their Premier League games in Dolby Atmos. And they have recently announced they are going to do the rugby autumn internationals and some boxing as well – starting with the Anthony Joshua fight versus Alexander Povetkin on September 22. BT have also done some boxing, across the Box Nation packages,” he said.

“The Joshua fight is the first for Sky and the biggest. And Dolby Atmos just sounds great for boxing. The ring walk, the crowds – it’s a show. You know the crowd are going to be lively. It’s quite an easy win to use the PA to create that Atmos feel,” said France.

“So when you use something like the Soundfield mics, as Sky and BT do, with the new decoders they’ve put in the trucks they can get the 5.1.4 speaker set-up out of that. And then the use of the PA just works so well, with the MC announcements and even the bell-ring. It sounds great, as you get the reverberation around the event with that 3D sound experience.

“It’s part of the overall growth, that has initially come out of the UK but is growing internationally around content being delivered in Dolby Atmos,” said France. “All the FIFA World Cup games were mixed in immersive audio, and then some of the broadcasters took that and delivered it as Dolby Atmos. BeIN delivered a selection of games, and Channel One in Russia and a couple of others.

“Ultimately there’s a separation between what the host mixes and how you encode that,” he continued. “But it was great to see, and now all the major events, as we go through the cycle, are looking at what they should be doing on a test or trial perspective if not something on that scale.

“The UEFA Champions League Final was again delivered by BT Sport in Dolby Atmos. We’re seeing so much progress in terms of the natural adoption of Atmos, particularly when aligned to 4K and/or HDR. It naturally comes together,” he said.

“We see that on the device side as well. We’re seeing an increasing number of televisions with Dolby Atmos built in. These are 4K televisions; now the top five Chinese set makers have announced they’re going to include Dolby Atmos in all their future televisions – so we’re going to see a much wider range coming out in that mid-tier pricing bracket. Pretty much all new technologies come in at the high end, but we’re now seeing it roll into the mid-market.

“There will be so many customers who go out looking for a new TV and find they can now get Dolby Atmos,” said France. “They may not have been looking to invest in a sound bar – but they know the Dolby brand and that it stands for a great experience and so they’ll look at two TVs and decide to buy the one with Dolby Atmos. We’re going to see that more and more.

“Sound bars are the second biggest growth market in audio today. The biggest is smart speakers. Sound bars are the real growth area in terms of what we class as add-on audio systems. Sound bars have really come into that mid-point where someone just wants to be able to plug in a single HDMI cable and get a better experience. Dolby Atmos is delivering across all those arenas now, even down to mobile with the Samsung S9.

“We’re really pleased with the progress, both on the content and device sides. We’re focused on those areas where, in order to get the best, you need to change the content, the delivery and the device,” he said.

“We’re similarly pleased on the Dolby Vision side; there’s some great momentum there as well,” France continued. “TVs are getting down to around the $350 mark now. The great thing about Dolby Vision is it makes even more of a difference on the lower end TVs.

“Expensive TVs generally look great – and Dolby Vision helps that – but when you get down to something like the more mainstream TVs the difference is more noticeable.

“We’re also seeing great momentum around devices like the Xbox S and Xbox 1X, where Dolby Vision is being added on top of the Dolby Atmos support they already had. Likewise Apple continues to roll out more products with Dolby Vision. As you can imagine, their selection process is not trivial, so when they make a selection it’s a really good thing,” he said.

“We’ve been really pleased with some of the trials we’ve done around live Dolby Vision. We have Tencent Video in China, who are launching the world’s first commercial Dolby Vision-enabled OTT service. Their first game, streamed live in Dolby Vision HDR, is happening during this show. We’ve done a number of trials, but this will be the first commercial service – the ‘BT Sport’ for Dolby Vision, live on air to customers.

“We’re very fortunate that the over-arching Dolby brand recognition is really strong; that helps us establish the individual brands for the platforms like Dolby Atmos and Dolby Vision,” said France.