Earlier this year at the NAB Show, Imagine Communications CEO Tom Cotney, who came on board in December 2017, announced that he was splitting the company into two organisations.

One would be focused on playout and networking and the other on advertising technology. Cotney’s vision, which is heavily reliant on the broadcast industry’s migration to IP-based systems, continued to take shape at IBC.

With 100 channels launched using IP technology over the past 90 days and a projected 58% CAGR in its IP playout business, Cotney proclaimed at the company’s IBC press conference that “our big bet on IP is finally paying off. We made a bet at Imagine on IP-based technology and that is starting to feel a little more like a return on investment,” he continued. “So it’s nice to see those headwinds into tailwinds and getting some momentum behind you.” 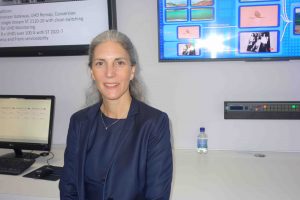 & Networking Solutions, to discuss the arrival of real-world IP-based deployments and the changing nature of relationships between suppliers and end users. We began by referencing that Imagine Communications’ press conference, at which Tom Cotney referred to the ‘big bet on IP’ that is now starting to gain momentum for the company.

“Yes it’s true, both on the IP networking installs in production as well as on the playout front,” she said. “On the playout side clearly it’s all about launching new channels – some of which were definitely driven by the World Cup this year, which was a good push with some exciting projects – and then on the production side it’s about continuing to make the 2110 ecosystem work, in trucks and in master control. All very much driven by sports and by UHD, clearly, and by HDR. You have to have it now, on the production front,” said Connan-Lostanlen.

“If you’re going to do it, IP is the best way and standards-based is the best way. You’re still in the best of breed environment and you’ve got to make sure everything works together. I think that continuing to promote interoperability and the education around what we learn from projects is vitally important.

“Network processing is really at the core of this strategy,” she continued. “You know it’s IP but in reality it’s still hybrid; so what we are doing is creating islands of pure IP connecting to things that may still be baseband. And that’s why the Selenio Network Processor (SNP) is key, as it is a gateway between the two worlds. Then on top is the very important orchestration layer, with the Magellan Software Defined Orchestrator,” she said.

“The combination of those two things really creates an ecosystem where you can mix IP and SDI and expand in the way you want. We have a lot of momentum with SNP around the world. In the United States we’re seeing a lot of new stadium projects that are going straight to IP – well, IP/hybrid – and the demand for SNP is super high.

“It’s more than a gateway in fact, because longer term this type of product can turn into a multiviewer because of its reconfigurable FPGAs on the Xenium microservices software architecture — so we have a lot of flexibility to repurpose those products for whatever applications are needed.

“And of course it’s important to have the HDR option there in all the various formats that people want,” she observed. “We’re focusing on that as well right now. QVC Japan, the shopping channel, is leveraging this now, as is TPC in Switzerland with their truck and the new Global Production truck in Italy.

“At IBC we also have the Epic multiviewer, which is 2110-capable. It’s important to say that 2110 is not just a standard now; it’s being used. It’s in operation. There’s still some work that is continuing to add to the standard, but it’s in the field.

“We feel really good about this, and we get feedback from customers that may have taken the more proprietary route and they are rethinking their operations: so, to be agnostic on how to connect things is really important,” she said.

“As Tom Cotney said in our press conference, we started early and we pushed hard, so we’re now in deployment mode – not in a ‘demonstrating that it works’ mode. We’re focused on finishing it off, and at the same time supporting those products – I don’t want to call them legacy, rather products that people still want – if customers are not ready to move to IP or next-gen.

“Here at the show,” she continued, “we are also having conversations about how we compete in the market, no longer on the technology front necessarily but on how else we can help our customers with new services – to help them migrate, provide them with consulting expertise and help them plan their transition.

“We look at our engagement with customers in a different way now, talking about total cost of ownership and helping them reduce their costs by bringing new ideas and new services. We are changing the conversation a little bit.

“Our customers are spending more on content and more on delivery, and less on new infrastructure and less on operating it. We’ve got to help them figure out how to make some savings so they are able to invest in the infrastructure — despite the pressure on the other two ends.

“That’s the takeaway here,” she concluded. “We don’t have a choice in this regard, I don’t think. So while technology innovation is super-important and part of our DNA, we’ve got to continue innovating on the business front as well.”

Additional reporting on this story was provided by Jason Dachman