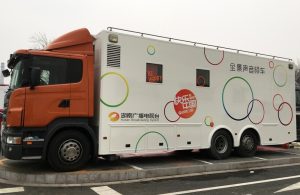 Speaking in advance of IBC, Genelec MD Siamäk Naghian remarked that “with the launch of the S360 [two-way monitor] and 7382 [subwoofer] we now have a comprehensive range of monitors and subwoofers for all room sizes, SPL requirements and listening distances.”

The far-reaching suitability of the new monitors is underlined by the fact that both are said to be ideal for any professional application demanding high acoustic power or listening at a distance – “from large immersive setups in post-production studios or film mixing stages, to play-live monitoring in music production or EDM playback.”

Other features include a short-term SPL capability of 118 dB – with peaks even higher – and a long throw capability that can provide reference quality accuracy even at listening distances of over 10 metres. The monitor offers full integration with Genelec’s GLM software for the configuration, calibration and monitor control of more than 40 channels without the need for external processing.

Also capable of working with the GLM software is the 7382, described as the most powerful Genelec subwoofer to date. Delivering low frequency extension down to 15 Hz, the 7382 houses three custom-designed 15-inch long-throw  woofers. Each benefits from the vibration-free environment of a heavily braced fibreboard enclosure, with laminar flow bass reflex porting extending along the entire rear wall to ensure low distortion and compression-free performance, even when the 7382 delivers outputs in excess of 130 dB SPL.

The new monitors emerge during a period of intense interest in immersive audio for broadcast, film, music production and other areas. Genelec expects these monitors to resonate with this emerging market, predicted by Janflod at IBC to be “in a build-up phase of interest that I think will go on until 2020. I think we will see a lot of very interesting developments taking place.”

In line with this Genelec has also devised a new set of educational materials aimed at helping professionals to better understand and make use of immersive audio. Titled Genelec Immersive Solutions and available here the publication includes a comprehensive overview of the requirements for creating an effective immersive audio set-up, including insights into the most commonly adopted formats and the Genelec solutions that can help to make the most of them.

“This is a very comprehensive guide and should help a wide range of end-users to get to grips with the opportunities of immersive audio,” said Jones at IBC.

Through the use of the GLM software, it is possible to switch between monitor configurations and surround formats quickly and easily – from simple stereo to surround and all the way up to Atmos.

Chinese systems integrator NDT Group worked closely on the landmark project with Hunan TV senior recording engineer Long Hongliang, who remarked: “I’m confident that the implementation of this Genelec monitoring solution and Dolby ATMOS within the new OB truck will prompt and inspire many more creative ideas within the Chinese broadcasting community,. It is a strong example of what we can achieve and it is already greatly adding to the quality and breadth of audio production within our television programming. Most of all it creates the opportunity for a wealth of new media content. The truck has already been employed on a number of major events and concerts, and we expect that it will participate in many more large-scale live production broadcasts in 2018 and beyond.”