It’s been seven months since Belden completed its acquisition of SAM (Snell Advanced Media) and merged its portfolio under the Grass Valley brand. Grass Valley CEO Tim Shoulders took the stage at the company’s IBC press conference to declare the integration between the Grass Valley and SAM product lines to be complete, with the fruits of this integration on display at the show in the form of new features for GV Stratus, GV Convergent, GV Flex, ICE automated channel playout and other products.

“We are substantially complete with the integration activities related to SAM,” he said. “The majority of it is behind us and we are moving together – as of this show – with one foot forward. R&D and sales resources have been combined into one team. We are happy to report that we are moving forward together as one team.”

One of the key announcements from Grass Valley at IBC was the public launch of a new R&D initiative dubbed Core Technology. Led by VP of Core Technology Mike Cronk and conceived internally back in 2016, the initiative will take a more collective, agile approach to R&D across and embrace what Cronk called a “lean engineering” philosophy that will allow Grass Valley to take product development time “from weeks to minutes.”

The Core Technology initiative will deliver common cores, platforms, engines and interfaces across Grass Valley’s entire portfolio, including video processing, IP connectivity, cloud technologies, and software-defined solutions. According to Cronk – who called Core Technology “one the most exciting and impactful things that I’ve ever been a part of” – the initiative will set the direction for the Grass Valley portfolio moving forward and take a modern ‘build once, integrate to many’ approach.

Grass Valley dedicated a portion of its IBC stand to eSports this year, partnering with FaceIT to produce a demo featuring professional gamers in a full-scale eSports competition environment. Grass Valley also introduced the new LDX 86N RF head – a wireless, shoulder-mounted 4K RF head that provides a single solution for transmitting HD, 4K and High-Speed HD over the same link, even simultaneously transmitting high-speed phases (up to 3x1080p) with a separate 3G video channel.

The largest COTS-based IP facility in the world

At the show, SVG Europe sat down with Tim Banks, vice president Sales EMEA, to discuss the aftermath of the SAM acquisition and how this joint momentum, in tandem with new implementations of technology within large-scale sports production, has already brought considerable success to GV EMEA in 2018.

“From a European perspective, one of the key things has been sports driving 4K,” he said. “That’s a wave we’ve been riding previously as two individual companies and now even stronger as one larger, integrated business.

“We see that trend continuing. I would say, in the market overall, our view is that conditions are relatively flat and yet as the combined Grass Valley I think year-on-year we’re 20% up in terms of our revenue growth. 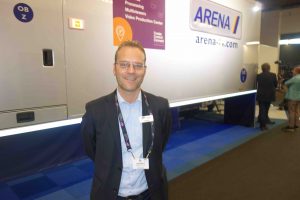 “That’s largely driven by live production investment,” said Banks. “And what’s really driving that is the increase in sports content, and major events. “Wimbledon was huge for us, partnering with NEP for their entire IP infrastructure. That was probably the largest COTS-based IP facility anywhere in the world, for the Wimbledon Championships.

“It was made up of two components: the first was two OB trucks, which could then be used for general purpose requirements after Wimbledon; and then the rest of the system was a series of fly-packs. For an event the size of Wimbledon they have to consolidate them all together, and then after Wimbledon their whole business rationale was that they had not just increased business capability but flexibility. With regard to the fly-packs, the beauty of IP is that the system can be reconfigured to any scale, to give them complete flexibility,” said Banks.

“One of the benefits of the two companies [SAM and Grass Valley] coming together is that we now enjoy the closeness with the customers, as Grass Valley Europe, as previously enjoyed with customers in North America. We’re now of a scale, and we have complimentary footprints, so we have a tremendous presence in Europe, that, from an outside perspective — as a former SAM guy — was the perception of Grass Valley’s strength in North America,” said Banks.

“And actually if you look at the numbers now, EMEA is the biggest revenue-contributing region. From a Grass Valley and Belden perspective that’s great, because now we’ve got a balanced geographic profile in terms of revenues,” he said.

High production values for World Cup and for eSports

“The FIFA World Cup was huge for us this year,” continued Banks. “The core strengths of Grass Valley are 4K, HDR and live production – that’s what we live and breathe. So the amount of equipment from Grass Valley that was being used by all of the productions across Russia was huge.

“One of the nice examples – and it aligns itself to the IP story – is that in the same way NEP invested in IP to have the scale for Wimbledon, Timeline were the predecessor in investing in IP, with scale for 4K and HDR coverage. The same Timeline UHD2 truck that was on the SAM booth last year was the truck that provided UHD coverage for the BBC [in Russia]. So Grass Valley has been at the heart of all of those key sporting events during the summer.

“We have a great partnership with NEP across Europe,” said Banks. “They’ve been a champion of our LiveTouch replay server, for example: NEP Netherlands was the first to use LiveTouch to cover UEFA Champions League for the Netherlands. And we’ve got a great showcase facility near here in Amsterdam.

“I should also mention the partnership with Arena Television, which sees the third Arena IP truck on the booth this year. They were the first [to go IP], two years ago. They’ve now rolled out their third IP truck, and they’ve said that it was great to work with our team,” said Banks.

“We learned a lot of lessons with the first truck – as you always do being first – and then on the second we applied them, and with the third truck now it has been a seamless technology transition. Arena’s primary driver is for BT Sport, primarily for their Premier League [coverage].

“Another big recent sports deployment has been in Finland, with Telia. They’re the local telco, and have seen the opportunity to buy rights for Finnish ice hockey. Through working with our partner Broadcast Solutions we developed the design for a new production facility that’s based on Kahuna in terms of switching capability and LiveTouch as the replay server. And they actually went live for the start of the ice hockey season this weekend. This is a system of the scale of Formula 1, in terms of production capability.

“eSports is also becoming an increasingly important part of our business, as demonstrated by our partnership with FaceIT which was recently secured in the UK,” said Banks.

“We’ve worked for quite a long time with the likes of Riot Games in the US and in Europe, both directly and through their preferred service providers. EA Sports and Blizzard as well: and sometimes their needs are even more elaborate then Premier League football or American football, because you have to cover the player, the screen, his hands, the audience … because it’s all part of the show.

“The big shift we’ve seen is the numbers: the huge audience viewership is drawing in advertisers, and as soon as advertisers become involved then the production values have to go up to match the expectations. If it’s sponsored by Samsung, they have a minimum set of requirements in terms of how their brand is represented.

“The same with Coca-Cola and Mercedes: these big investors are taking these new sports media really seriously. So the key things become high quality, and speed,” said Banks.

“Core competencies of Grass Valley are high quality, multi-format support and speed. The kind of solution we now have — with cameras, switchers, replay as an integrated solution — is as applicable to eSports as it is to the World Cup Final.”

Additional reporting for this story was provided by Jason Dachman