At the IBC Show in Amsterdam, Pliant Technologies rolled out the latest version of its CrewCom intercom system, featuring enhanced firmware and the system’s new Fiber Hub. The new Fiber Hub (CHB-8F) expands system capabilities by allowing up to eight connections using standard SFP-based ports along with a single copper port for interface to existing CrewNet connections. 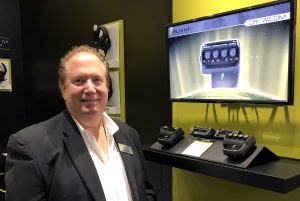 SVG sat down with VP of Global Sales Gary Rosen to discuss the latest features that are now available in the CrewCom system, how Pliant is serving the evolving needs of live-sports producers, the ever-growing challenges of RF coordination as spectrum disappears, and the latest trends he’s seeing in the sports sector.

Can you highlight a recent sports production in which Pliant systems played a big role?

The FiberHub has really enhanced our capability in terms of distance. Recently, [CrewCom] was used by CBS Sports at a major golf event and it gave them the ability to [create] a reliable long-range communication system for the golf course, which really requires extensive infrastructure.

We’ve been able to cover quite a number of sporting events where we have multiple areas of coverage. For example, we were able to provide a specialized application for WWE, where we had one system that actually enabled two different completely independent groups of people to work together on one system. One group was a virtual-reality truck and the other was the main-production truck for the event. It was on a single system but they had completely separate communications and did not interact with one another. Our radio systems allow us to allocate [resources], so that certain people can go to a certain area, which is a fairly exclusive feature to our platform. That allowed for us to better deploy resources depending on where people needed to be. We were able to give permissions to the people depending on where they needed to go, which allowed us to deploy less hardware on systems. So our ability to allocate the resources to give permissions to a specific area really helped for that kind of an event.

What are the new features being introduced to the CrewCom platform at IBC?

We’ve had a number of features that were in prerelease at NAB and are now actually live in our 1.2 version. These new features allow [users] to daisy chain transceiver to transceiver directly for control units or directly through our CopperHub or FiberHub. That allows us to minimize the wiring necessary and put any resource where you need it the way you need it. If you need it on copper, if you need it on fiber, if you need to go from one unit to another – it really opens up the system and allows for minimalistic wiring so that you don’t have to run as many wires as you would in a more traditional matrix-style system.

What are some of the major challenges that wireless intercoms are facing today in terms of RF coordination and dealing with shrinking spectrum availability?
We are seeing some hesitancy around the 2.4 GHz range because many people don’t understand that 2.4 is not like analog, where you had an assigned frequency and you were done. In the digital world, we can share frequency space. And so we get some resistance. On the other hand, most of our competition uses DECT-based [1.9-GHz] systems. DECT-based systems are fine but they do have certain limitations; for instance, you can’t use multiple different systems in the same venue at the same time. So we’ve become an accessible alternative when people have either maxed out a system or are using adjacent systems.

In some cases, people see 2.4 GHz and WiFi as equivalent. WiFi uses some portions of the band that we’re in, but WiFi isn’t compatible with the way we handle the signals [because] we’re frequency hopping. People are also concerned, understandably, that suddenly 30,000 or 40,000 cell phones have come in and they’re all searching, and that the noise floor is made worse by things like LED walls and DMX lighting system controllers, which also generate RF interference. The traditional way around that in the old-school analog world was to turn up the power. Well, we can’t turn up the power any longer, partially because we’re a bi-directional system: you can’t turn up power on one side but not on your belt pack. The way to overcome that is by placing the antennas and the transceivers where you need them, closer to where you need the coverage, and our ability to put on many transceivers also helps us overcome the power issue.

Another issue that’s very important to address, particularly in a large, domed facility, is RF reflection that results in RF multipath [propagation]. RF reflection multipathing is common and difficult to deal with for all frequencies. It’s really the problem with these big arenas, and the combination of noise floor and reflectivity is a problem. However, our new engineering allows us to overcome both of those at the same time. Specifically, we have some very special technology that allows us to overcome multipath in a very unique way, much different than any of the other systems. But it takes a little while for people to get used to it.

What are the most significant intercom trends or challenges you are seeing in the live-sports market today?
We’re seeing more challenges for a combination of reasons. There are several beautiful new facilities being built – like Mercedes Benz Stadium in Atlanta or Mandalay Bay Arena and T-Mobile Arena in Las Vegas. While they look beautiful architecturally, they are extremely challenging in terms of RF. So, you have a combination of environments that are not only unfriendly to all RF – regardless of the frequency – but they are also more and more crowded with different needs for different groups. You have umpires or referees, you have the production people, you have the broadcast people, all with their own special needs. So it’s become very difficult for RF coordinators.

And it’s getting tougher every year because everybody wants more and more wireless, so there is less and less frequency to work with. The biggest obstacle today is overcoming [customers’] fear and just saying ‘let’s try it and see how we can make it work.’ Today, it’s just a different world in terms of allocating frequency. So, we’re trying to come up with specific solutions for specific problems. We are officially at the point where never again will one solution be right for everybody, everywhere. It’s no one-size-fits-all anymore. But we believe we can be an important part of that toolbox to overcome these challenges moving forward.