During the 2019 Champions League final in Madrid, several FOR-A (stand 2.A51) Ultra High-Speed FT-ONE-SS4K cameras were utilized for critical slow motion replays as part of the live broadcast. The same camera will be on display within the FOR-A booth (stand 2.A51) during IBC 2019 at the RAI Amsterdam this week. The FT-ONE-SS4K will be demonstrated with the ZE-ONE 4K zoom extractor during IBC. 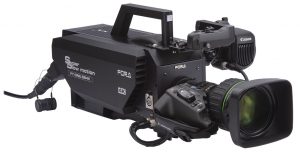 Specially designed for live, instant replay in ultra-slow motion, the FOR-A FT-ONE-SS4K supports UHD shot at up to 1000 frames per second. It provides a continual, real-time 4K live output. A native 2/3-inch image sensor enables the use of a B4 bayonet broadcast lens directly on the camera. With a 2.5 stop light advantage over previous generations of super slow-motion cameras, the FT-ONE-SS4K offers higher frame rate image capture than was possible before. It supports HDR/SDR and WCG. The camera also features 24 axis color correction. Canon’s OLED viewfinder is compatible with the FT-ONE-SS4K and can be used as an option. Flicker Correction is also available as an option. FT-ONE-SS4K camera systems have been used during many high-profile live sports events from all over the world.

The ZE-ONE 4K extraction system allows FT-ONE-SS4K users to frame and extract desired 4K image areas to capture the action for HD replays. The system provides operators with an intuitive touch-screen interface to frame and extract specified HD scenes at any size from 4K sources. The ZE-ONE allows operators to smoothly zoom in or out and includes an embedded audio delay processor.