Expect to see — and hear — lots of interesting audio products at IBC 2019 in Amsterdam this week. IP is ubiquitous, from consoles to microphones. Immersive audio isn’t far behind, with formats and microphones in its show portfolio.

Dante developer Audinate (Booth 8.A25) will show its recently announced version 1.1 of Dante Domain Manager. This update brings key improvements and new features to users and integrators: flexible installation options, improved email alerts and notifications, support for SMPTE 2110 devices, and secure access to LDAP and SMTP servers. Version 1.1 is now delivered as a complete ISO package and may be used in virtual environments — such as VMWare ESXi, Oracle VirtualBox, and Microsoft Hyper-V — or it may be installed directly onto a “bare metal” server with no additional software required. 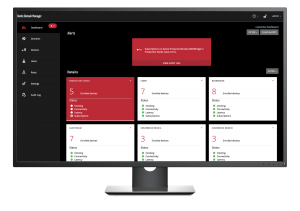 Audio-Technica (Booth 8.B35) will debut the ATW-A410P UHF powered wideband antenna, a low-profile UHF (470-990 MHz) antenna that mounts to a wall or ceiling. It features a four-position switchable amplifier (-10 dB/0 dB/+6 dB/+12 dB) to compensate for cable loss, along with an LED indicator to display the current gain setting. To accommodate various installation environments, the antenna’s BNC cable can be configured to exit from the top, side, or rear of the antenna. Mounting bracket and screws are included.

Fraunhofer (Booth B.80), celebrating its 70th anniversary this year, is presenting an MPEG-H Audio end-to-end real-time broadcast chain with live production, metadata workflows, emission, and reception of immersive audio content captured at the Eurovision Song Contest and listened to over the MPEG-H–ready Sennheiser AMBEO soundbar. Sennheiser and Fraunhofer jointly developed the built-in virtualization technology based on their respective AMBEO- and upHear technologies to create an immersive-audio experience from a single device.

Q5X (Booth 8.B02) will be at the show with its signature on-person wireless systems, including the new QT-5100 RefMic with integrated rocker-style mute switch, which was introduced at last December’s SVG Summit and has been rolled out to all 31 NHL arenas and used in all NHL games. Also new since IBC 2018 are the Q5X QR-3200 dual-channel wideband rackmount receivers and QR-M3 wideband mobile receivers, which can be tuned between 470 and 698 MHz. Q5X has also introduced Mode 2 companding for all Q5X QT-5100 transmitters, improving audio quality and reducing companding artifacts. In addition, the new receivers have a companding Mode 4, which will receive Shure UHF-R analog transmitters.

Sennheiser (Booth 8.D50) will showcase a wide choice of wireless microphone systems, including the XSW-D, AVX, evolution wireless, and Digital 6000 and Digital 9000 systems. These provide high-quality wireless transmission in various frequency ranges: 2.4 GHz, 1.9 GHz, and UHF. In the AMBEO immersive-audio area, two full end-to-end workflows for multichannel and Ambisonics productions will be displayed. Within the framework of the AMBEO for VR partnership program, Solid State Logic will show what a live immersive television mix recorded with the Sennheiser AMBEO VR mic and various spot microphones can look like.

Following last year’s in-depth immersive release on its System T broadcast production platform, Solid State Logic (Booth 8D.83) will be working with partners at IBC 2019 to present the realities of multiformat audio in action. Given its support for ATSC 3.0, Dolby Atmos, and MPEG-H, plus the recent Sennheiser AMBEO partnership, visitors will be able to experience the benefits of next-generation audio to enhance the broadcast experience. As a partner within the Sennheiser (Booth 8.D50) AMBEO for VR program, SSL will showcase VR mixing with an AMBEO VR mic as part of immersive presentations. System T provides on-board A-B format-conversion support for the AMBEO VR mic, with a 360 transcoder to render to a wide range of multichannel outputs from 4.0 to 7.1.4. At 4 p.m. each show day, a presentation at the SSL booth will showcase the AMBEO integration and production workflow.

Wheatstone (Booth 8.C91) is bringing its SwitchBlade AoIP appliance for the WheatNet-IP audio network. Containing audio codecs controlled by SIP and transporting Wheatstone logic I/O and controls as well as serial data transparently, it is the first product of its kind to combine AoIP logic control with SIP and codec bandwidth optimization to transport both high-quality programming and the control logic critical for full studio operation between sites. SwitchBlade has two Ethernet connections, one for connecting to a SIP/VoIP service provider or SIP-enabled PBX phone system, the other for connecting directly into the WheatNet-IP audio network. Also showing for the first time will be Wheatstone’s Strata 32 audio console, which packs 64 channels and the latest IP audio innovation into a 40-in. frame, fitting most television applications and budgets.

Lawo (Booth 8.B50) will have plenty to talk about at the show, including what it asserts is the world’s first AES67 stream-monitoring software. AES67 Stream Monitor displays detailed information for as many as 16 user-definable audio streams, each of which can contain multiple channels. The main display presents audio levels and alarm indications at a glance for all monitored streams. Other products at the booth will include Lawo’s vm_dmv, a virtual module for its V__matrix IP routing and processing platform that turns the V__matrix C100 software-defined processing blade into a distributed, infinitely expandable 4K/HDR IP multiviewer. And Lawo’s third generation of the IP-based mc²56 optimized for IP video-production environments, with full native support for SMPTE 2110, AES67/RAVENNA, and Dante.

The following Conference Programs will be of interest to audio folks:

Sept. 14 — SMPTE ST 2110 Interoperability Testing: The Pudding of Proof
Speaker: Robert Welch, technical solutions lead, Arista Networks
In this session attendees will learn about the anonymized results of several testing efforts, including the JT-NM testing and Dirty Hands workshops, and will also hear about the lessons learned and considerations during SMPTE ST 2110 deployment.

Sept. 16 — The New Sound of Hollywood, in Association With SMPTE
Speakers: Nuno Fonseca, CEO, Sound Particles, and Tormod Ringnes, Sound Designer
A new kind of groundbreaking CGI-like sound-design software, capable of generating thousands of sounds, is being used by major Hollywood studios — including Warner Bros., HBO, and Skywalker — on some of the world’s biggest productions. In this session, the audience will hear from Ringnes and Fonseca to learn about immersive 3D audio production with a difference.