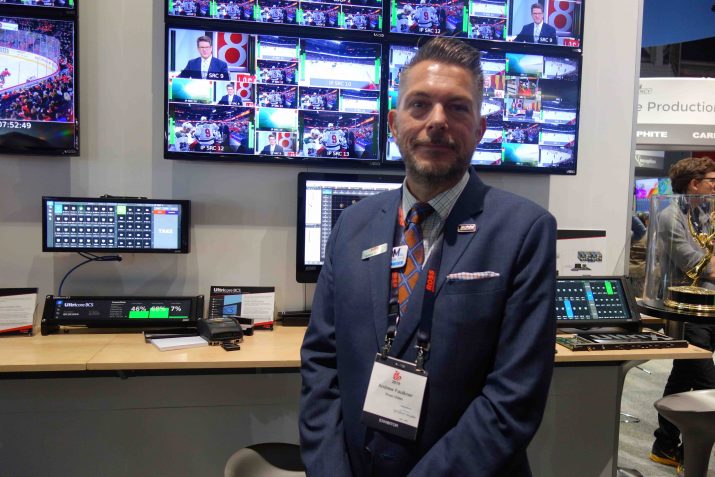 Looking at the big picture in terms of live sports, what emerging trends are Ross Video seeing in the Europe at the moment?

Andrew Faulkner: “Traditionally with a lot of live sports it’s been an American phenomenon with cheerleaders and marching bands and so on. But that isn’t the case now in Europe. We’re starting to see a lot of clubs – Ajax Amsterdam and Tottenham Hotspur are two – that are viewing this as a way of engaging fans and as a more immersive experience for them. Plus the fact there’s a great opportunity for advertising and promoting other events going on. We’re definitely starting to see that now as a thing in Europe.

“We have a very strong presence in North America and Australia. I don’t know if you are aware, but we did the in-stadium for the Super Bowl – all the advertising, LEDs, ribbon displays and the mega-screen. What’s powering that is Expression Tessera and Mosaic – which are used to drive any LED of any shape, all kinds of curves, pixel-accurate.

“And now it’s not just in-stadium, it’s actually leading up to the stadium, outside in the concourse. At a venue in Australia, for example, we power the fountains that light up.

“And actually we released a product at NAB called Power Play, which is part of our Dashboard family, specifically for live sports events. That enables you to do scheduling. For example, you can schedule for the fountains to come on and for the adverts to say ‘welcome’ outside the stadium. And you don’t even need to be there; you could schedule it the night before for when the fans start to arrive.

“And of course we work with third party vendors, for example in lighting, so you can control all the lighting at the venue as well. any kind of external event triggers – it’s not necessarily all Ross equipment. From our Overdrive and Dashboard we can trigger these events, so they become very immersive experiences.”

Ross Video seems to be right at the heart of the phenomenal rise of eSports, both stadium- and facility-based? North America is racing ahead in this market now – but Europe is not far behind.

Andrew Faulkner: “There’s a huge continuum from the broadcast side of things to the in-venue. It’s quite interesting: it really isn’t about ‘which piece of equipment fits eSports?’ Well, what is eSports? It depends what you’re looking for.

What about that live broadcast community: can you touch on some of the key highlights or messages from Ross Video here at the show?

Andrew Faulkner: “We’ve had a big announcement with Red Bull, for their studio in Salzburg. I think they have a full house of Ross equipment, from the automation system Overdrive to Dashboard, Expressions, switchers, the cameras. That’s a big opportunity for us and we’re working very closely with Red Bull. We also had an announcement recently about a partnership with Sky Sports for Sky Sports Racing.

“Certainly we’re not as well known in broadcast in EMEA as we are in North America, but that’s changing. One of our fastest-growing areas is EMEA. We now have the office in Reading, which has a complete studio. And now we’re adding an office in White City for Piero.”

What other major trends or conversations are featuring at IBC 2019?

Andrew Faulkner: “One of the things we’re highlighting is virtualisation. People may say ‘well Ross is not IP.’ We are IP. We’re about choice.

“That’s not because we don’t see a clear trend in the market, it’s just that customers want different things at different stages. They’re not all innovators.

“But what we see is that the end of the rainbow for all this is virtualisation. That’s an area in which we are investing. One of the problems is doing the synchronisation and the timing, the PTP. We’ve found a way of solving that, and we have products that are approved to work with the VMware products. We’re very proud of that, and it’s something in which we will continue to invest.

“You can break things down: you don’t necessarily have to commit to a switcher, as that switcher could be a switcher for one event and a graphics engine for another event. Having it all virtualised, and not owning the equipment, changes the business model. You’re no longer selling pieces of equipment; you’re selling slots of time.

“It’s not an overnight thing. If you look at our portfolio now, we have SaaS-based models on things like Inception in the cloud and social in the cloud, so we’re already in that space. And a lot of our traditional hardware products also have software licenses. We’re in that transition – and we’re hoping it will be a smooth one,” he said.