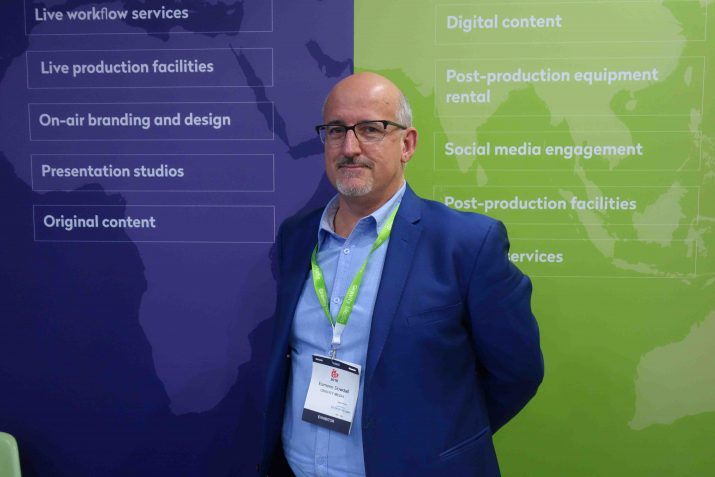 Just before IBC Gravity Media Group announced the acquisition of Chief Entertainment, a Sydney-based provider of live studio and production services, from Telstra Corporation. Gravity Media already operates in Australia under the Gearhouse Broadcast, HyperActive Broadcast and Input Media brands. The announcement said, “Chief Entertainment will continue to operate under its existing name and branding until it is fully integrated with Gravity Media’s Australia operations.”

On Day Two of the show, SVG Europe sat down with Gravity Media Group marketing director Mark Allatt and executive director Eamonn Dowdall to discuss the evolution of the group’s brands and activities, and some of the key trends emerging from discussions on the show floor at IBC 2019.

Mark Allatt: “This is the first time we’ve done the show as Gravity Media Group, so we’re starting to really think about how we bring all our businesses together. And of course we’ve just acquired a new one, Chief Entertainment, which gives us on-the-ground capability in Australia we didn’t have before.

“People have viewed us through the lens of Gearhouse and HyperActive and Input. And although they may spend time buying what they know us for, they not perhaps aware there’s a whole range of other services we do that haven’t been accessed or talked about. That’s the big thing for us here.”

Eamonn Dowdall: “We’re very conscious that, as we grow, we need to make it easier for customers to understand what we do. Obviously the individual business have their existing relationships with clients, but ultimately for the next generation of clients coming into this market — like the FAANGs or new channels trying to get digital services on air — we’ve got to find a way to talk to them.

“How do you go on a journey to rebrand? It just takes time. In some markets we’ve got a single brand so it’s a lot easier – versus, say, the UK which has three brands, or Australia which now has four. There’s a process. Some of that is internal, as you’ve got to capture the hearts and minds of people to go on that journey.”

Mark Allatt: “Another big push for us here is on eSports. We’ve gradually being doing more and more in that space. Some of those guys know exactly what they want, and some don’t really know what they want. Some of it is attached to more traditional sports as well, such as the F1 eSports.

“It’s quite complex and very different; you can hardly even categorise it as one market. The gaming industry is just massive; it’s bigger than Hollywood. Yet it’s still under the radar.”

Eamonn Dowdall: “Yes the eSports area is very interesting. If you’ve very very old school in this industry, you probably think it’s going to come and go. The market has to consolidate and get itself straightened out, of course. But it’s a great opportunity for us.

“At this show we’re also seeing that federations, broadcasters and production companies are preparing themselves for the big events on the horizon. Our business benefits when locations are a little bit off the beaten track – where maybe the local service provision is very limited, or they’re not going to have the required scale.

“And we’re seeing that federations are taking decisions now to cut the middle man out: they don’t want to sell their rights to broadcasters and getting them to be the host broadcaster. They’re prepared to take on the mantle of doing that. And we’re getting a lot of encouragement from certain customers who’ve come a long way to be here, to ask us to be in certain markets. They want us to have a local presence. That’s interesting.”

Mark Allatt: “Regarding remote production, everything joins up in order to be able to do it. We approach remote production in slightly different ways in different markets. One of the most interesting ones isn’t actually here in Europe – it’s over in the United States with the Pac 12 work that we do. We’ve got a much smaller facility that goes on-site and everything goes back to their centre. This follows the Pro Show acquisition we made last year. They have a range of smaller vehicles that do that work. We’re not a truck company in the UK, but we are in the United States and we are in Australia.

“Where do the cost savings come, in relation to remote production? The hardest thing is the cultural change, where people think, ‘how can I not be there?’ Well, actually you’re in the car park anyway! You could be a mile away – or one hundred miles away. The cultural aspect always has to be considered.

“Sure, if you’re spending time with the players and doing a wraparound, it makes sense. But you’re going to get no more feel for the event in a Portakabin in a car park than you would sitting in West London.”

Eamonn Dowdall: “On the technology front, in our area of business you’ve got to be flexible. You’ve got to be noticed, you’ve got to invest. In the area of IP, we live on the knife-edge of, what are the benefits and what will people pay for it? We’ve got to be agile when investing.

“I think we will see a big transformation on investment into IP technology in the next 18 months. That’s partially driven by clients wanting it, and partly by us giving the client the benefit of what the technology can do.

“There is no doubt that people are trying to make content for less. It doesn’t necessarily mean they’re going to spend less – they’re actually going to make a lot more content.

“But I still believe the industry and technology have a long journey ahead. Is it really going to be cheaper? I don’t know. We say to people, ‘why not do this event remotely?’. And by remotely I mean, reduce the amount of people on location, bring back the feeds, cut it, and therefore the saving are made.

“But the piece in the middle has still got to get paid – and that’s the connectivity. That’s not free. I firmly believe that some tiers of sports are not moving. They’ve got better things to be worried about than taking the risk of doing [remote production].

“A lot of this technology has still got to be thoroughly tested and proven. No one is ever going to get thanked for delivering a dark screen that goes on air. You can’t argue ‘but I’m trying to make it cheaper and faster’ if you go off air!” said Dowdall.