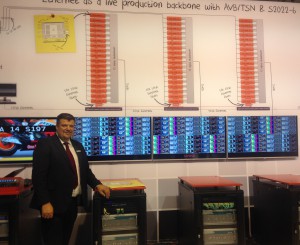 Broadcast network infrastructure solutions specialist Axon underlined its commitment to the Audio/Video Bridging (AVB) networking standards project at IBC2015 by unveiling an Ethernet AVB-based proof of concept geared towards the demands of live production. Among other applications, sports broadcast looks like a very relevant application, says Axon CEO Jan Eveleens, given that “latency and reliability are the most important elements [for such productions]. With AVB you get all the elements you need for that, including the synchronisation and bandwidth management.”

Whilst AVB has made significant inroads into industrial and automotive markets, and in a more limited way into pro-audio, its need for new switching equipment is felt by some to have held back mass-adoption. But Axon believes that AVB still has a strong future – not least in broadcast, where its “robust and reliable” capabilities lend themselves to the requirements of live video over IP.

Accordingly, the POC showcased at IBC2015 involved the management of 216 HD streams distributed over IT switchers (courtesy of Extreme Networks). New products were automatically detected in the network and files were transferred from one switch to another – without call for a Software Defined Network (SDN). Audio was then separately over the same network without the need to embed it. With Clock reference streams embedded in AVB, the POC highlighted the lack of requirement for separate reference distribution.

Responding to the suggestion that AVB has lately lost ground to some other approaches, Eveleens insisted that it is “a very important technology. AVB makes it possible to set-up and change a network very quickly; it really is plug-and-play. And you don’t have to think about management or reconfiguring an SDN; if there is insufficient bandwidth you will be warned and will not be allowed to make that connection. In situations where things change and you need flexibility, AVB can deliver – and you don’t have to be a wizard to make it work.”

Speaking to SVG Europe on the Axon stand, Eveleens also stressed the underlying capabilities of AVB. “We are loading more than 90% [with this POC], which is a lot of traffic, and it still works reliably. I think it is in this area where AVB will really show its power compared to some other approaches,” he says.

Nonetheless, the manufacturer retains an agnostic approach and continues to innovate in order to support other technologies – not least SMPTE S2022-6, which defines a unidirectional IP-based protocol for the transport of real-time video, audio and ancillary signals. Axon says it is helping organisations prepare for the transition from SDI by developing conversion solutions using both AVB and S2022-6 to be able convert to and from SDI and cross-convert. In line with this, the POC at IBC also featured a Utah Scientific router delivering SDI and S2022 content to other areas of Axon’s booth.

In addition, ISE2015 found Axon supporting demonstrations of the LiveIP project on the European Broadcasting Union stand following its recent collaboration with the EBU and Belgian public broadcaster VRT. The presentations – which took place throughout the show – incorporated Axon’s Synview networked multiviewer in an S2022 infrastructure.

Speaking in advance of IBC2015, Axon CTO Peter Schut remarked: “We see ourselves as a conversion company and our focus is to provide solutions that enable our customers to enjoy greater flexibility and easier expansion as they upgrade their operations to 4K and IP – without the need to replace their complete infrastructure. It’s still early days for video and audio over Ethernet and the majority of broadcast equipment is still SDI. We expect hybrid systems (a mix of SDI and Ethernet/IP) to emerge and remain for years to come. With this in mind, our range of Synapse signal-processing cards are already fitted with both coax and Ethernet connectors, so that they can eventually be upgraded to accept Ethernet/IP, protecting the initial investment. Later this year, we will also begin to ship a new range of SDI-AVB cards to help those customers who are ready to make the transition.”