At IBC Snell Advanced Media announced the latest release of its FormatFusion software. FormatFusion4 adds HDR capabilities to its Kahuna production switcher range. SAM’s Kahuna with FormatFusion4 technology was a key part of BT Sport and Telegenic’s 4K HDR workflow in June at the UEFA Champions League Final in Cardiff.

The company unveiled its strategic collaboration with Cisco, under which SAM will integrate Cisco’s IP Fabric for Media into its IP networking solutions and resell the Cisco solutions, to include Cisco Nexus 9000 series switches and Data Centre Network Manager (DCNM) software-defined networking solution, as part of its IP strategy including studio, playout, OB trucks/fly-packs and remote production.

At the SAM IBC press conference, newly-arrived CEO Eric Cooney — previously CEO of Tandberg Television and most recently a cloud-hosting IT services company – provided an insight as to why he joined the company and where he sees SAM going in the future.

“Given my recent exposure to the cloud, I’m returning to the M&E sector just at the point where this industry is about to move with vigour to the cloud,” he said. “We believe we have the world’s greatest development engineering team in terms of understanding the market and being first to market with best in class products – with our legacy from Quantel, Snell & Wilcox and Pro-Bel. I have been very impressed with that innovative technological history, giving us such a strong brand reputation.

“As to compelling market drivers,” said Cooney, “we can look at IP, 4K, HDR and cloud-as-a-service — any one of which has significant implications for our customers. SAM is well positioned to assist our customers in adopting technology across those technological shifts.

“Finally, there are a lot of technology suppliers in this space, operating with varying degrees of success. We believe there is significant enterprise value in targeted M&A, to put businesses together that can add incremental value. There is a need for significant consolidation in this industry – [where we want to be] a global market-share leader,” he said.

The rise of SAM in the sports production market

Out on the show floor, SVG Europe sat down for a conversation with Neil Maycock, EVP & General Manager, Media Software Solutions. We started by discussing how quickly SAM has moved from talking about potential game-changing products for the sports production market a couple of years ago to being right in the thick of the action in 2017, playing significant roles in high profile on-site and remote productions with BT Sport, Formula One Management and UEFA among others. 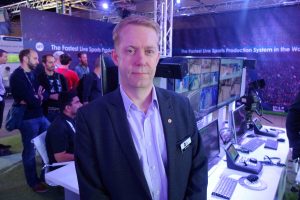 “We’re tracking in the right direction,” said Maycock, “although I think we can still do a lot more in terms of revenue creation. But in terms of getting our profile in the right place it’s really good. We thought your Sports Production Summit [on September 14, just before IBC] was great, especially being able to talk about our work with Formula One.

“We’re very fortunate with Liberty Media being prepared to let Formula One open up this year, in terms of being able to discuss things. So we were very pleased that [F1 TV Systems General Manager] Trevor Turner could talk about what they’ve been doing at your Summit and put pictures of our products up on the screen.

“Especially in the [live sports] replay space: when you’ve got such an embedded incumbent as EVS, how are you ever going to move the needle?” asked Maycock. “Similarly with switchers: there has been a religion around the desk, whether Sony or Grass. It hasn’t mattered whether we had technical superiority with Kahuna – it’s been really hard to displace that operator base.

“Things like what Formula One and BT Sport are doing: the market disruptors like UHD and 4K. It makes people stand back and take a good look. ‘This is what Formula One did. OK we’ve got to make the technology shift: yes you can do 4K, but what else can you do if we’re going to make a change?’

“That’s the opportunity for us,” said Maycock. “And because there’s so much disruption in the market, this is why I think the opportunity to raise our profile in sports is great timing. We were really happy with your Sports Production Summit event.

“If you look at the adoption of things like 4K and HDR,” he continued, “it’s being driven by sports. There’s a lot less interest among the primary broadcast channels; they’re going to be dragged kicking and screaming by consumers into that space – as there is no commercial benefit for them. BT Sport and Sky, on the other hand, can use it [4K and HDR] to differentiate their offering. Sport is the area where there’s money and competition to get eyeballs, so people will make investments. That’s good for us,” said Maycock.

IP and cloud: Understanding the possibilities

“Regarding the adoption of IP and SMPTE 2110, there are enough projects now with us and other people. It’s not the norm yet; there’s still a way to go before it’s the default position. Neither is it a black art anymore that people are scared of,” he said.

“There’s a big difference to 12 months ago: for instance at your event Trevor Turner was asked if he would go IP now [having decided not to in 2016) and he said Yes, he thinks he would.

“It will be specific projects for now,” said Maycock, “where people have a blank sheet of paper; but it’s only going to gain momentum from here, I think. There is an awful lot of inertia in the industry: but I think we’ve broken the back of the technical challenges and how it can really work. Some of the fear is gone.

“At the other end of the spectrum, what were doing with news and embracing multi-format production — that’s getting a lot of interest as well because people have got to got content onto lots of platforms and what they cannot do is sustain lots of parallel processes. So to have one creative or journalistic process to then output to many platforms simultaneously – that’s a good message.

“Collapsing our [post] products down and addressing this multi-format challenge, and then recognising that actually our value is not in the edit seats – we’ve pretty much commoditised that area – our value is in the workflow. And frankly we don’t care if people have 50 Adobe Premieres with our workflow underneath; that’s the market for us. It’s about giving the customer the choice.

“We’re on the cusp,” said Maycock. “We’re involved in several RFPs right now and if they land we could see an explosion with VIBE [multi-platform news production]. We’re right there.

“And then of course there’s the area of cloud playout: it’s been about working out where the market is,” he said. “From a sports perspective, the ability to create a channel, let’s say for the duration of a soccer match, is literally viable now. From a blank sheet of paper to a running channel in seven minutes is what we’re demo-ing here on the booth.

“You could literally stand up a stream for an event and then switch it off. I don’t think people have yet got their heads around something that granular where you might have a two-hour channel,” he said.

“But suddenly the technology is there; and it won’t take long for people to grasp and it will be really interesting to see adoption of that over the next 12 months – those instant, pop-up services around an event. Couple that with remote production, where you can cover an event at a fraction of the cost without having to send a truck to the site: it could get really interesting,” said Maycock.